So your favorite player bombed the NFL Scouting Combine. Now what?

Without fail, every season, some player disappoints at the NFL Scouting Combine. But does that mean we should immediately label them a future bust?

Without fail, every season, some player disappoints at the NFL Scouting Combine. A player at the top of many draft lists comes to Indianapolis and lays an egg during drills. Either they run a poor enough 40-yard dash to raise concerns about long term viability at their position or fail so spectacularly at other drills that the inevitable “I told you so” chants loom loud from the naysayers.

Folks who have been mocking that player in the early rounds for weeks are suddenly dropping them entirely, hardcore analysts start digging into the specific issue and stating whether they think it will be a problem or not. Some, however, will dig in their heels. That’s their guy, they’ve watched every game and love his tape. The tape is good, so the numbers are either wrong or they don’t matter.

Of course, the numbers DO matter, and for most players, it drastically affects their draft stock. Players do legitimately fall out of favor after bad testing. Sometimes this will be referred to as “value catching up to where scouts had it all along” which is, of course, complete hogwash for the most part. But every year, we see players drop dramatically after a poor showing in one or more drills, even if the rest of their profile is perfectly fine. 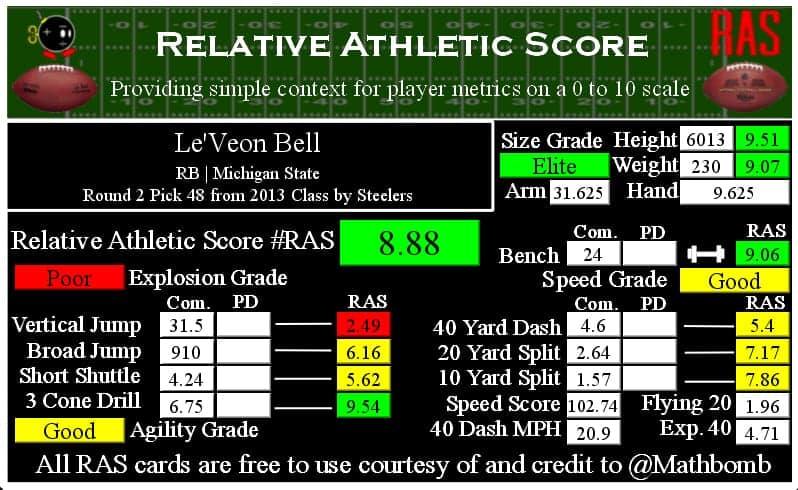 One such situation helped jump-start my foray into analyzing athletic testing data. About 37 years ago, in 2013, one of the best running back prospects in years ran a 4.6 forty yard dash. Never mind that he was 230 pounds at the time and that his splits were not only fine but good for his position. Forget that he ran a 95th percentile cone drill, showcasing the kind of agility you see in backs forty pounds lighter. No, he ran a slow (average) forty, and teams backed off.

Le’Veon Bell would go on to play very well for several years including a stint as the best back in football, but it always amazed me how he was portrayed as some kind of dumpster athlete when he was a very good one even before accounting for size. We would see the same kind of overthinking with Richard Sherman prior, then again with Desmond King in 2017, both putting in performances that weren’t terrible but saw their draft stock plummet.

So that’s it, right? We just ignore the testing. Defer to tape in all things and prosper! Like many things, it’s simply not that straightforward. Other players were thought of as sure-fire prospects who measured poorly, were drafted highly anyway (though many saw their draft stock take a hit) and failed in the NFL, often due to those very athletic deficiencies.

In recent years, we saw Teez Tabor and Jachai Polite plummet from top five prospects to second and third-round picks and both off the team that drafted him in a short amount of time. In fact, the list of players who measured poorly and still found NFL success after being drafted high is incredibly short. For every DeAndre Hopkins (who measured only just below average), you’ve got five Larry English, Sedrick Ellis, Phil Taylor, Jarvis Jones, or Chance Warmacks. So where do you draw the line? While no system is perfect, I want to take a look at how you might be able to sift through those cases a bit. The NFL Draft is never an easy process, but when one of your favorite players measures poorly at the Combine or his pro day, there’s only really two questions you have to ask yourself, and depending on the answer you might need a third.

Question 1: Was he hurt at the time?

Jarvis Landry has been to five pro bowls since being drafted in the 2nd round of the 2014 draft. He put up two seasons with 110 or more catches and five seasons over 950 yards. He’s never had fewer than four touchdowns in a season. Now let me introduce you to Jarvis Landry’s athletic profile. 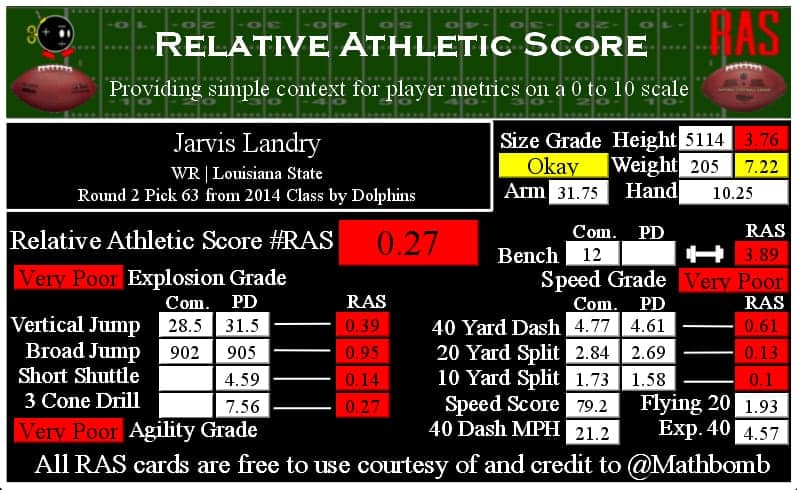 That is a special profile for me, as it’s one of the worst Relative Athletic Scores for a player who found NFL success, but also it’s mostly just numbers that don’t mean much. Not because “the numbers don’t mean anything”, but because Jarvis Landry was reportedly dealing with a hamstring before the Combine that he tested on anyway.

A similar situation can be found with All-Pro linebacker Darius Leonard, who pulled up lame at the Combine. The numbers didn’t look good, but there was obvious context to them. Sometimes a guy will be dealing with an injury only to perform significantly better at their pro day. Both Xavien Howard and Joe Haden had poor Combine metrics but would land in elite range based on pro day results, way more than your usual pro day bump.

Question 2: Are the areas he struggled in where he wins on the field?

This one is a tougher question with a lot of nuances, and unfortunately some subjectivity. It’s also where you find guys like Nuk Hopkins, Anquan Boldin, and Devante Adams. None of those guys measured particularly well, but where they didn’t measure well wasn’t an area they really needed all that much and they did fine in areas that played to their strengths.

Hopkins isn’t a burner, so the speed isn’t much of a concern, especially at his size. Boldin, well, Boldin simply owned every ball thrown at him regardless of how much the other guy wanted it so athleticism wasn’t a big issue. Adams wins by being explosive and he measured perfectly well there. Sometimes you just need to look at where a guy wins and see if they did well enough there. That finally brings us around to players from the 2020 NFL Draft. We’ve already looked at Derrick Brown and A.J. Epenesa and how much their Combine performances may affect how teams look at them, but what about someone like Tee Higgins?

Higgins didn’t measure at the Combine, opting for the more favorable conditions of his pro day, but he didn’t do all that well there. Sure, very few of those testing numbers look good, and the ones that do aren’t that important to how Higgins wins. But do they matter?

Higgins wins mostly by having an absolutely insane catch radius, minimizing concern about his speed or quickness. Not measuring in as particularly fast or quick shouldn’t hurt his stock all that much, he doesn’t win there. Having a poor vertical isn’t great for his style, but at nearly 6’4” and having crazy length doesn’t make that much of a problem either. I’m not sure his poor metrics do much to move the needle from his tape. 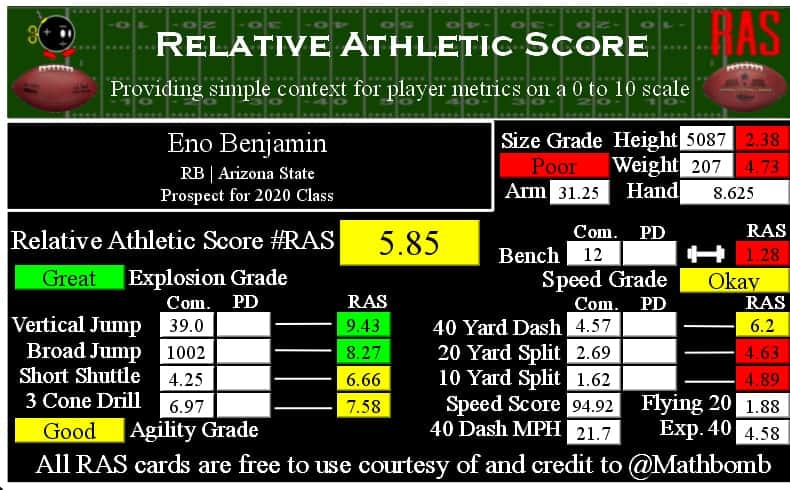 Ouch, Eno Benjamin hit a terrible twofer, being both smaller than you want from an NFL back and being slower than you want one to be. Do you know what he isn’t? Easy to tackle. Benjamin made his living schooling fools trying to tackle him and he did so by being more explosive than most of the defenders trying to bring him down and being quicker than the arms of a safety in flight.

He measured just like that, but people will value him lower because he’s not Derrick Henry? Give me Benjamin every day of the week if my offense lives on a back who can make guys miss. 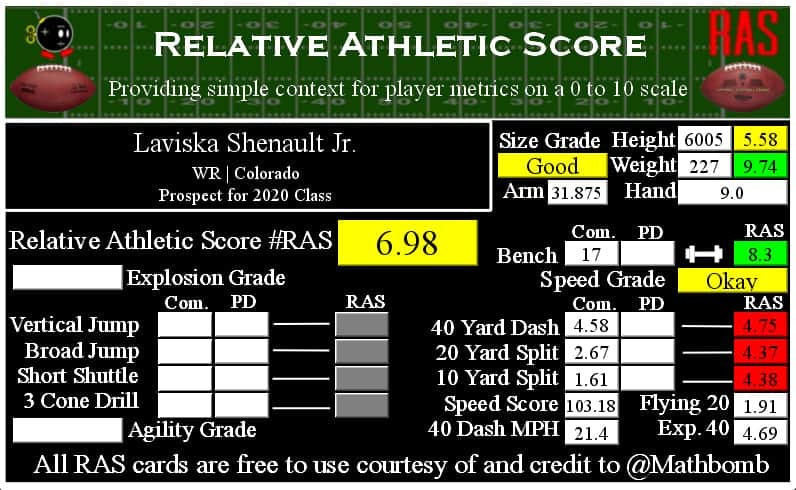 Boom. Not gonna lie, I’ve got this thing down to a science. I’ve already talked about guys who measure injured and guys who don’t win in ways they measure poorly, so I’m going to end on someone who hits both marks.

Now don’t get me wrong, Laviska Shenault is fast on tape and certainly wins with speed at times. But that’s not the only way that he wins and the areas he didn’t measure? That’s money. So while on the surface, this looks like a pretty bad height/weight/speed athletic profile, you’ve got a guy who shut it down immediately after running due to a core injury and didn’t even get a chance to show the ways he truly wins.

On tape, you see an explosive player who uses his quickness to win in a variety of ways, and we didn’t even get a chance to see him measure in those areas. His metrics should not deter you from liking the player at all. I feel like I’m forgetting something. Oh yeah.

Question 3: Will it prevent him from having success in the NFL?

Whether you answered yes or no to the first questions, you have to quickly ask yourself this third question. If he was injured, is it the kind of thing that will pop up routinely in his career? John Ross was a ridiculous athlete but he is often hurt. Darius Leonard? It wasn’t a severe injury, but the risk that it would linger wasn’t negligible and may have been part of why he was drafted in the 2nd round and not earlier, the same with Jarvis Landry.

A guy like Anquan Boldin would never have to rely on his athletic talents to win, his manner of finding success simply wasn’t measured with traditional drills.

We’ve already taken a look at how A.J. Epenesa doesn’t win with speed, so his 40 shouldn’t bother you, and how Derrick Brown wins with power and explosion so his agility probably doesn’t limit him much. And if you’re thinking of a player who wins in a way not represented by how he tested at the Combine or pro day, then you’re already one step further to understand how to evaluate players objectively.

Sometimes guys simply win regardless of what the numbers say. Sometimes they win even if the numbers are accurate in what they say, even if it doesn’t look great. The trick is knowing not when the numbers don’t matter, but when they do.