Relative Athletic Score: Is it risky to select A.J. Epenesa in the 2020 NFL Draft?

A.J. Epenesa didn’t produce great numbers at the NFL Combine, but is it cause for concern? Using Relative Athletic Scores, we take a deeper look.

By Kent Platte
March 4, 2020
Facebook
Twitter
ReddIt
Linkedin
Email
Jump around this article Click to show
Based on Relative Athletic Scores, is it a risky move to draft A.J. Epenesa?
There are still many reasons to have faith in Epenesa
Looking at Epenesa’s numbers in a different way

Every year following the NFL Scouting Combine, there are players who rise and players who fall in the eyes of teams and the draft community. Sometimes it’s a player with concerns over his speed who runs a fast forty and blows away expectations. Sometimes it’s an explosive pass rusher who runs a terrible 3-cone and sends scouts back to the tape to see if that lack of bend will be a problem at the next level.

Whether it’s good or bad, evaluators will always go back to film because it tells you whether those measurements are a true indicator of who the player is on the field. So what happens when a player puts up a poor metric, one that shows up on tape, but it’s not how the player wins on the field? At the 2020 Combine, we saw that very thing with Iowa pass rusher A.J. Epenesa. 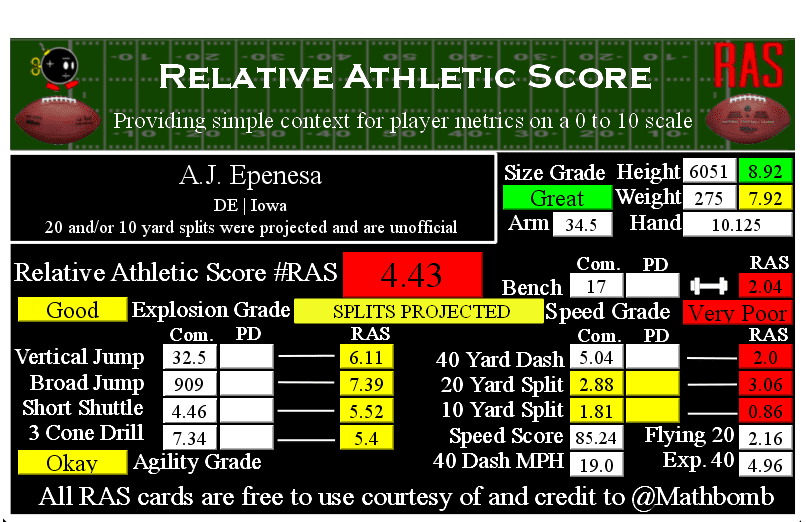 He also posted poor numbers on the bench press, netting only 17 repetitions of 225 pounds, but that is more understandable considering his 34.5-inch arms as players with longer arms posting poor bench numbers is fairly common (It’s just physics).

Based on Relative Athletic Scores, is it a risky move to draft A.J. Epenesa?

As someone who has been covering metrics for nearly a decade (Relative Athletic Scores, or RAS, is in its eighth year), I can safely say that drafting an unathletic pass rusher highly in the draft is a very risky move. Only one out of every five pass rushers who managed to get at least one 10.0 sack season in their career had a RAS below 5.00 (The bottom 50%), while almost six in ten had a score above 8.00 (the top 20%). Only 17 of those players had a 40-yard dash of 5.00 or greater, and only two in the past decade.

There are plenty of mathematical reasons to be skeptical of A.J. Epenesa’s chances in the NFL both based on his poor timing and his overall athletic profile.

As is often the case, those that are in love with his tape are likely to tell you to throw away the numbers. “Trust the tape!” they say. “You don’t play football on a spreadsheet,” they add snidely. Wouldn’t it be nice, though, if you could both trust the type of football player that Epenesa is on tape while also acknowledging his numbers as doing nothing more than showcasing who he is as a player? It’s the best of both worlds!

There are still many reasons to have faith in Epenesa

There’s some good news on that front as a deeper dive into those numbers that there’s far less reason to be concerned than his day at the Combine had implied. At six feet five inches tall and weighing in at 275 pounds (he reportedly played at or above 280), Epenesa fits a ‘tweener’ profile as an edge player, someone who can play both inside and out while utilizing their explosiveness on the edge. Those types of guys are all over the NFL and one thing most of them have in common is that they didn’t run a great forty time.

Two of them even appeared in the Super Bowl in Arik Armstead and DeForest Buckner (those two players mentioned before who were drafted in the last decade, had a season of 10.0 sacks or more, and ran a 5.00 or worse forty). Both of those two are admittedly a bit larger than Epenesa, over 290 pounds each, but they aren’t the only players with a similar profile to win in the NFL. 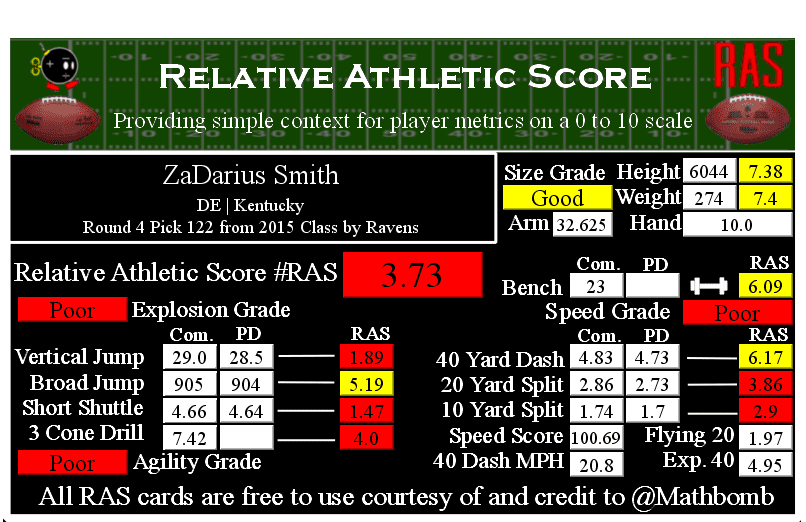 Packers defender Za’Darius Smith is a similar size to Epenesa and while he posted a better forty-yard dash, he put up worse numbers in every other area and has arms almost two inches shorter. Smith would put up 13.5 sacks for Green Bay, which helped lead them to the playoffs in 2019. But that’s just one guy and there are always outliers.

Another former Ravens draft pick, Pernell McPhee, posted even worse numbers than Epenesa did. While not a pro bowler or double-digit sack guy, he’s been in the league for nearly a decade and has been a valuable player every time he sets foot on the field.

Former Denver Broncos first-round pick Robert Ayers is in a similar vein, and posted similar metrics. To me, when combined with his tape, this is the type of floor you’re getting with A.J. Epenesa, a solid player you can count on to improve your defense. 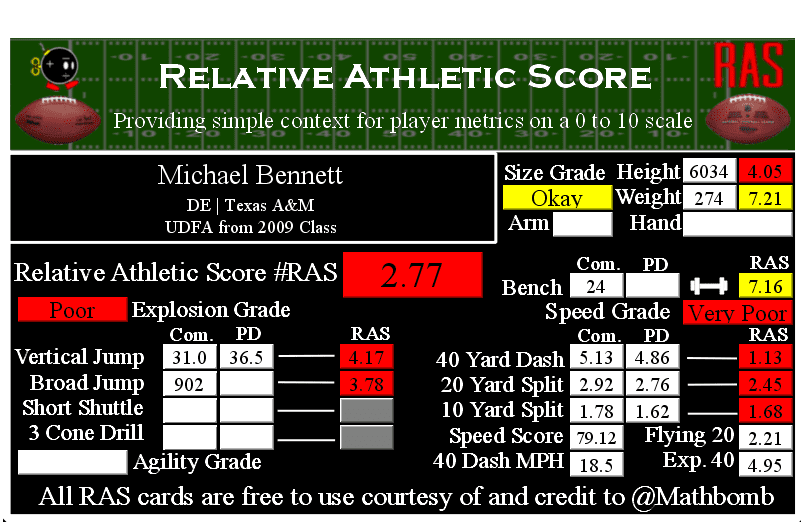 Michael Bennett was largely unheralded coming out of Texas A&M but he’s made his mark in the NFL. Another player in the same size and usage profile of A.J. Epenesa, Bennett was a three-time pro bowler, playing more than a decade in the NFL.

Looking at Epenesa’s numbers in a different way

So how do we quantify players like this, players who don’t fit the traditional build of an NFL edge rusher? How can we find players like this early instead of letting them fall the way Bennett, McPhee, and Smith did in the draft? For me, it was simply finding a different way to look at the data.

At first, that meant comparing players like this to defensive tackles, and while the scores would often be higher, it always felt artificial. I wouldn’t use those scores, but I would post both scores together to illustrate that the player wasn’t unathletic, simply a different kind of athlete. Like their role being caught between a tackle and edge, their profile was somewhere in between as well.

So I created a data set for these defensive linemen, consisting of defensive tackles below 325 pounds and removing the massive nose tackles that would rarely test well (and thus artificially inflate a player’s score). It also included defensive ends above 275 pounds, thus excluding the rangy, speedy ends that would artificially drop the scores of these players.

Among this new data set, we see a significantly different trend for players like Epenesa, Smith, Bennett, and the others. We see A.J. Epenesa’s raises all the way to 8.66 and Michael Bennett to a 6.56, while Za’Darius Smith’s score jumps to 8.77. DeForest Buckner and Arik Armstead, starters in the Super Bowl both drafted by the 49ers in the first round, scored an 8.93 and 9.63, respectively. 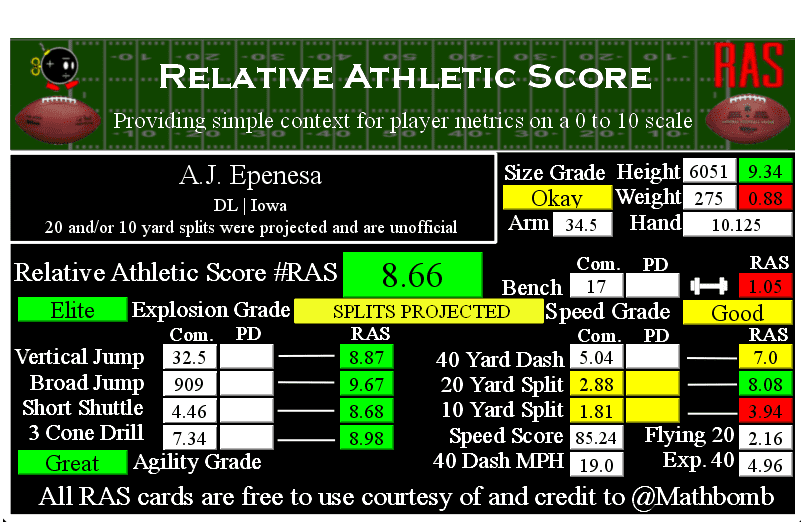 Some teams have already found methods of looking past ‘poor’ testing and finding out when those numbers are relevant and in what way. If you watched A.J. Epenesa’s tape and thought that he won by using his speed and agility to bend the edge, like a Von Miller or T.J. Watt, then you would certainly have a cause for concern.

But if you see that he wins in different ways, by using his size, length, and explosiveness to win manned up against a tackle or by winning inside through strength and technical hand usage, then the tape tells you that he is a prospect worth taking a chance on…and the metrics do, too.