When evaluating Auburn DT Derrick Brown, how will NFL teams reconcile his poor measurables with the outstanding play he's put on film over the past few years?

By Kent Platte
March 9, 2020
What's in this article? Click to show
Could Akiem Hicks be a better comp for Derrick Brown?
If not Akiem Hicks, could the comp be Linval Joseph?
How about Marcus Stroud?
There are many different parts to the puzzle

Early in the 2020 NFL Draft season, a common refrain was that there were four elite defensive prospects in the draft class. Chase Young, the talented pass rusher out of Ohio State, led the pack and was followed by his teammate in the secondary, Jeffrey Okudah. You then had the versatile, speedy linebacker out of Clemson, Isaiah Simmons, whose ability to play multiple positions had evaluators going gaga. The last of that bunch, and certainly not least in the minds of many, was Auburn defensive tackle Derrick Brown. His showing at the NFL Combine was disappointing, but there had been cracks already forming among evaluators as to his projection at the next level. 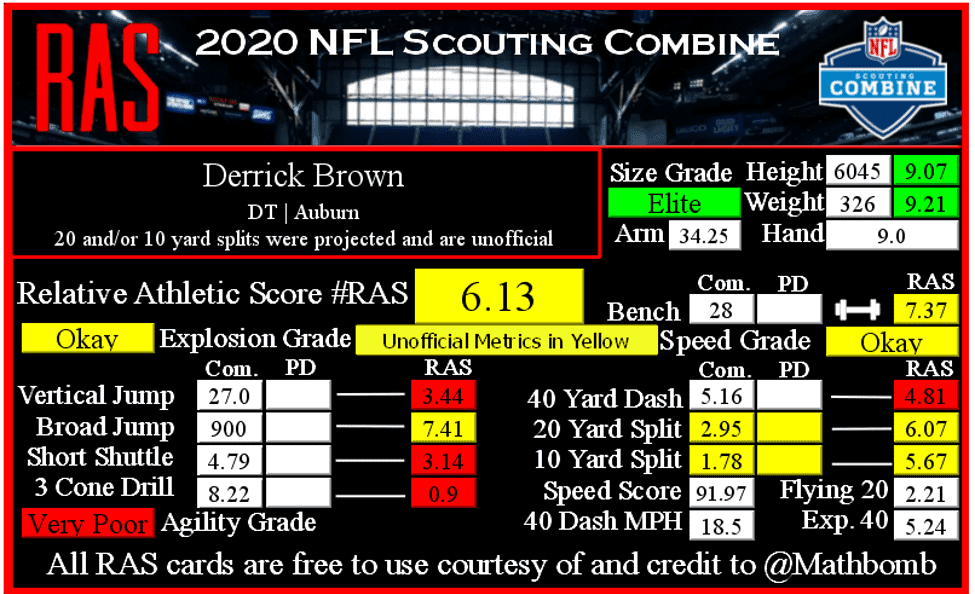 So for some, Brown’s NFL Scouting Combine performance wasn’t all that unexpected. Weighing in at 326 pounds, Brown ran a decent 40-yard dash at 5.16 seconds (after a timing error showed 5.6, causing some confusion).

Brown then posted decent explosion numbers, with a somewhat below-average vertical and above-average broad jump. That might have been disappointing for some, as Brown’s tape suggested a very explosive player, but at his size that was more than acceptable. What got heads turning, in a more negative way, was the horrible agility drills, as Brown finished his testing with a bottom tier 8.22 second 3-cone drill.

In a passing league, teams are always looking for an edge getting pressure. When that involves rushing up the middle, it’s always about finding the next Aaron Donald, the next Geno Atkins, or the next Chris Jones.

Could Akiem Hicks be a better comp for Derrick Brown?

Before the Combine, Derrick Brown was compared to Ndamukong Suh by some. But after posting agility times a full second slower than Suh, those were immediately replaced by comparisons to another larger player with a similar build, Akiem Hicks. 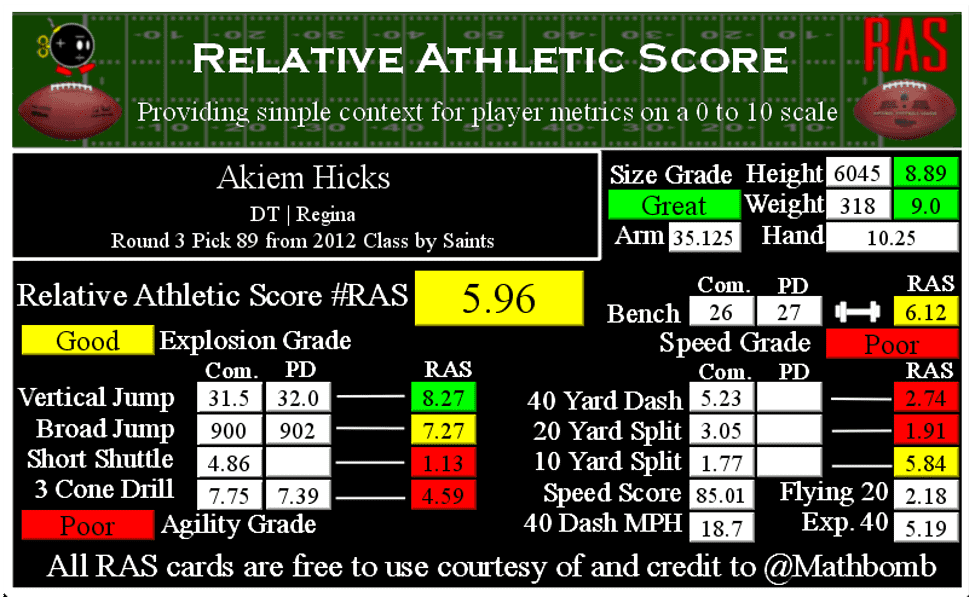 On the surface, this sort of works. Hicks has nearly the same physical measurements, though a little lighter. He posted good explosion drills and a decent (for his size) forty-yard dash. He even had a below-average cone time.

If not Akiem Hicks, could the comp be Linval Joseph?

No defensive tackle who posted an 8.00 or greater cone time has ever had a season where they recorded 7.5 sacks. There have only been three Pro Bowl defensive tackles since 1987 who recorded a cone time greater than 8.00, so I started there to find a fairer comparison for Brown. The first was Pat Williams. But while Pat played at a similarly large size, he wasn’t as big during the draft season. The second, another nose tackle, was Linval Joseph. 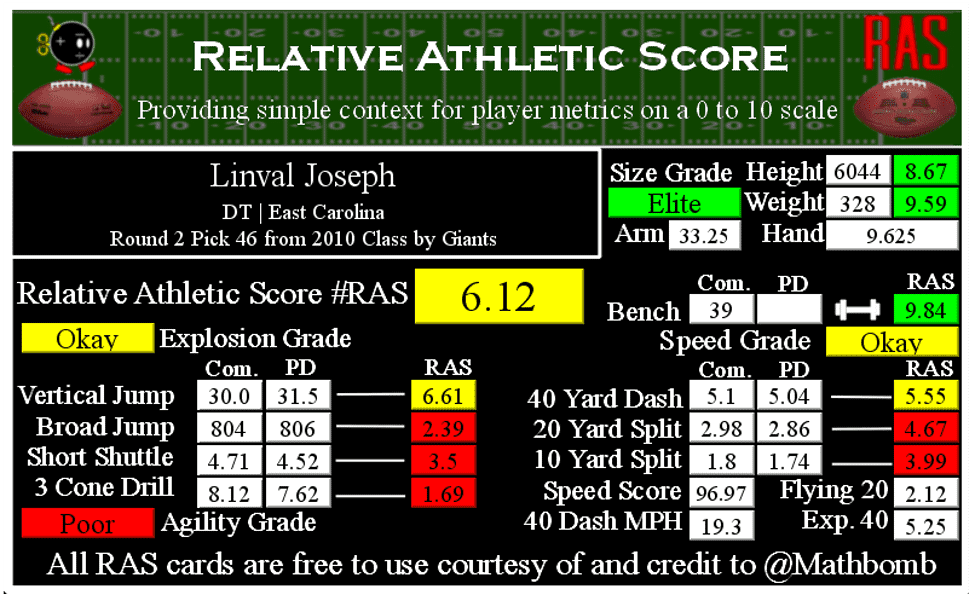 At an almost identical size, Joseph also ran a good forty-yard dash and posted decent explosiveness drills, though his were flipped from how Brown measured. Also, like Brown, Joseph measured with a very poor cone time and below-average shuttle. With such close similarities, it makes for an easy comp that lines up well.

Critics of Brown’s play will likely point to these parallels as more than just physical, too, as there are some who believe his pass-rushing upside is limited and he will likely spend his career on the nose. A high-end nose tackle is nothing to fret about, of course, as it’s a linchpin position for several defensive schemes in the NFL.

How about Marcus Stroud?

What if you don’t view his pass-rushing as limited? Surely there’s a closer athletic comp who had value in that area? As mentioned, no defensive tackle has ever posted a season of 7.5 sacks or more with a greater than 8.00 cone time. Only one, Trevor Price, posted such a season with a time of 7.9 or more, but that’s more than a quarter second faster than Brown. That leads me to the last Pro Bowl defensive tackle with an 8.00 or greater cone time, Marcus Stroud. 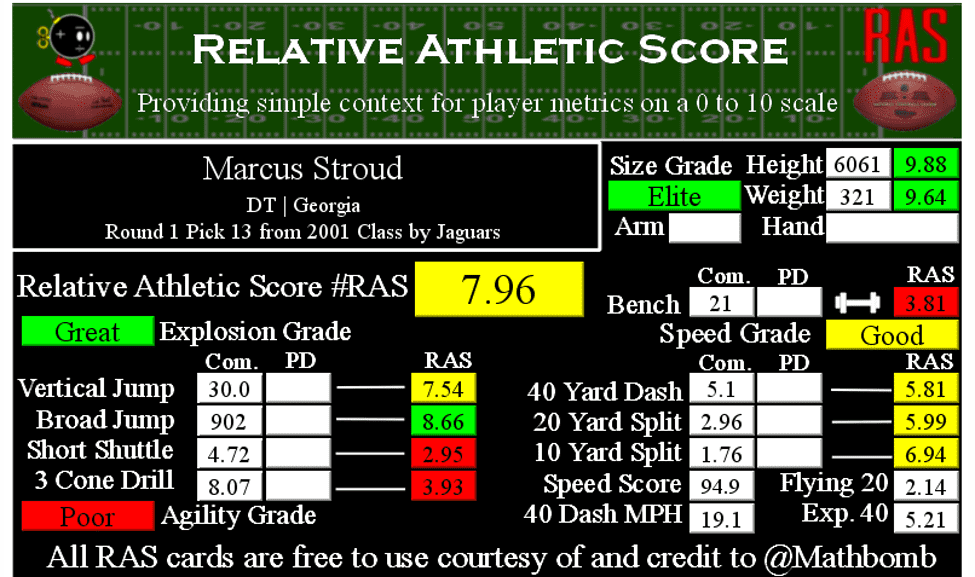 Stroud also had a similar size to Brown while also posting good speed and explosion for his size, though a little better in both than Brown. Stroud also put up poor agility times, including a cone time 0.13 faster than Derrick Brown, far closer than many other comps to successful players.

There are many different parts to the puzzle

All of this is only to look at athletic comparables for Brown, of course. Prior to Stroud and Williams, there were no defensive tackles who had made a Pro Bowl with that single, odious distinction of a terrible cone time.

Defensive tackles who become premier pass rushers with poorer metrics aren’t unheard of, which is why fans of Brown are quick to point out those players who’ve made it despite the numbers. It is, however, rare, which is ammunition for critics or the more risk-averse.

In the end, it would be foolish to discount Brown’s tape due to poor measurables, even if they’re very poor (and only one part). It would also be foolish to discount several failed attempts at ignoring the numbers made in the past and the value associated with taking a player who potentially could be one dimensional high in the draft.

Previous picks such as Malcolm Brown and Danny Shelton yielded good players, but they likely didn’t show the value of the draft capital used to acquire them. And when it comes down to it, that is ultimately the question with Derrick Brown. It’s not only if you believe he can develop into an impact player in the NFL, but what you’re willing to wager that he will.