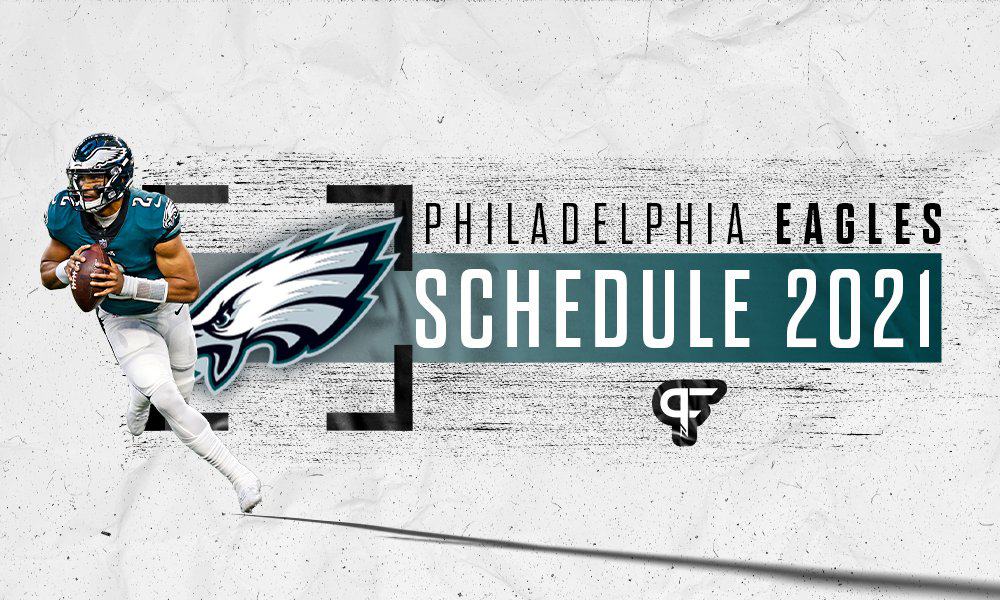 What is the Philadelphia Eagles’ 2021 NFL schedule, how many times will we see them in primetime games, and who are the toughest and easiest opponents on their schedule?

How many primetime games do the Eagles play in 2021?

The Eagles will play two primetime games in 2021. They will be against the Cowboys in Week 3 and the Buccaneers in Week 6.

When is the Eagles’ bye week?

Following the release of their schedule, the Eagles are tied for the sixth easiest schedule in 2021. Interestingly, they have the easiest road schedule, according to Vegas projected win totals but actually have the toughest projected home schedule. All three of the Eagles’ toughest projected games will be played at home, while on the road, they face just one team projected to win over eight games.

The three games on the Eagles’ 2021 schedule against teams projected to win over 10 games sees them face the San Francisco 49ers, Tampa Bay Buccaneers, and Kansas City Chiefs.

In the Chiefs and Buccaneers, the Eagles will have to contend with both Super Bowl participants from last season. The positive for the Eagles is that they will get to host those games, meaning they should at least get an advantage of having their fans in the stands. Nevertheless, both teams are favorites to return to the Super Bowl again this season, making these two games extremely difficult.

The game against the 49ers is somewhat of an enigma. Will the 49ers be starting Trey Lance, or will they stick with Jimmy Garoppolo under center this season? The contrast between those two, and the potential of having to prepare for snaps with either of them under center will make that a very tough game for the Eagles.

Four of the Eagles’ five easiest games on their 2021 schedule come on the road. This gives Philadelphia a positive in that it increases the chance to come away from those games with valuable road victories.

Two of those games come within the division against the New York Giants. The Eagles’ recent record against the Giants is strong, with 13 victories in their last 16 meetings. The Giants did emerge victorious, however, in their most recent meeting in 2020. This game will have some added spice after the Giants perceived the Eagles to purposefully lose their Week 17 game last season, costing the Giants a playoff spot.

The other three games come on the road against the Atlanta Falcons, Detroit Lions, and New York Jets. All three teams head into this season with new head coaches. Furthermore, the Jets head into 2021 with a new QB under center in Zach Wilson.

Those games against perceived easier opposition will be very telling for the future of Eagles QB, Jalen Hurts. Emerge victorious from the majority and he secures his immediate future. Struggles in those games, on the other hand, could see question marks raised about the Eagles’ future at the QB position.

After changing head coach and trading away Carson Wentz, the 2021 season is an intriguing test for the Eagles. The overall weak schedule should give them an opportunity to impress. However, if they struggle with a schedule that is perceived to be the easiest heading into 2021, then it could be a bad sign for the future of a number of members of the organization.

The projected Vegas win total has the Eagles set to win 6.5 games in their 2021 schedule. That number feels about right, but if they cannot pick up wins in tough games at home we could see them falling short of that mark this season.