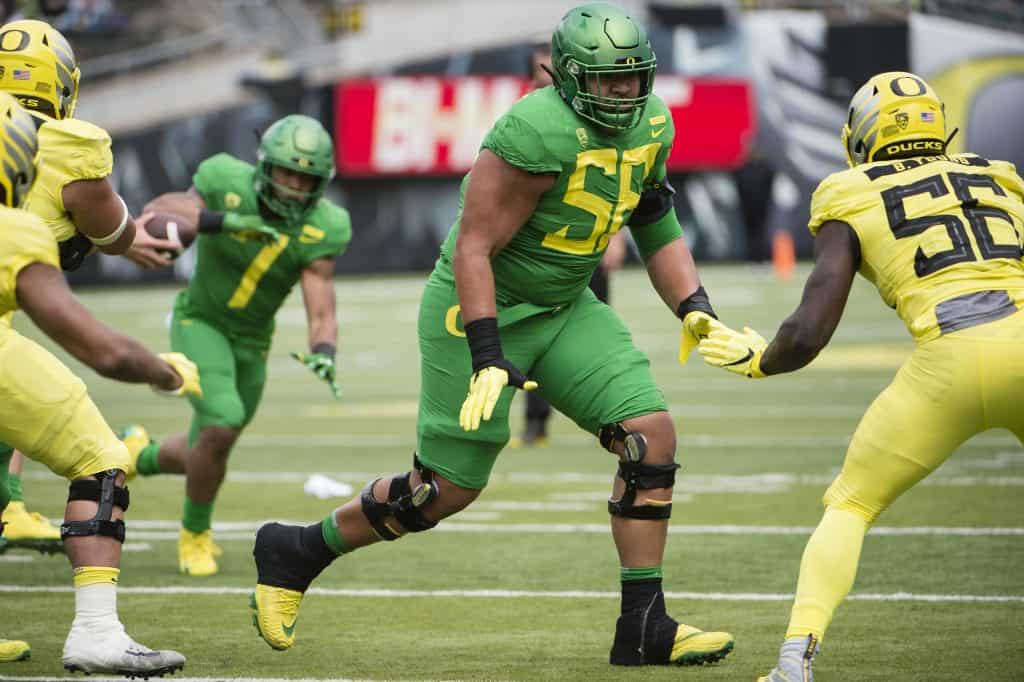 The Pac-12 endured a tumultuous offseason when COVID-19 spread across the globe. Originally one of the first conferences to cancel fall athletics, the Pac-12 reinstated the football season on September 24, with games beginning on November 6. The Oregon Ducks won the Pac-12 title in 2019, and with a bit of luck, wound up repeating in 2020. Oregon has one of the last pro days this offseason as the 2021 NFL Draft grows closer and closer — let’s examine the Oregon prospects to keep an eye on.

When is the Oregon Pro Day?

The 2021 pro day for the Oregon Ducks will take place on April 2.

One of the top players at his position since he began playing at Oregon, offensive tackle Penei Sewell is a large human. Born in American Samoa, Sewell moved to Utah at 12 years old and played football at Desert Hills High School. The 6’6″ and 349-pound guard received offers from numerous blue-chip universities but chose to take his talents to Eugene to play for the Ducks.

Sewell became the Ducks’ starting left tackle from the moment he stepped foot on campus. He started every game he was healthy as a freshman in 2018, missing six due to injury. Despite his playing in six fewer bouts, Sewell earned freshman All-American honors and was voted an All-Conference honorable mention by the Pac-12 coaches.

Trimming weight before the 2019 season, Sewell ascended to a new level. He did not allow a sack in 13 of 14 games all season. Additionally, he would not surrender a single pressure or hurry in nine contests. Thanks to his dominant play, the true sophomore won the Outland Trophy — awarded to the best interior lineman in college football.

With his draft stock at an all-time high, the 2021 Oregon prospect opted out of the uncertain 2020 season to prepare for the 2021 NFL Draft. According to Pro Football Network’s Chief Draft Analyst Tony Pauline:

“From the onset of his career, Sewell was projected as a potential early draft pick at the all-important left tackle position. He possesses the footwork, agility, and movement skills, to hold down the position at the next level, and he projects well in a zone-blocking scheme. He must improve his strength at the point and develop a nasty attitude, but Sewell comes with a large upside.”

Sewell excels in both pass and run protection, and his well-rounded skill set provides schematic superiority when it comes to draft fits. He’s graded as the third overall player on Pauline’s 2021 prospect rankings for a reason.

Given his consensus top-five ranking, PFN Draft Analyst Ian Cummings believes the Jets, Bengals, or Lions could bring in the Oregon prospect. Seeing Sewell for the first time since the 2019 season at Oregon’s 2021 Pro Day will be electric.

Another Oregon 2020 opt-out, Jevon Holland was a top safety prospect a season ago. A four-star athlete from Bishop O’Dowd in Oakland, California, Holland started on offense and defense. He spent most of his career anchoring the defense while spending time as a receiver during his junior and senior seasons.

Holland starts for the Ducks from the jump

Due to players ahead on the depth chart and game flow changes, younger defenders may need some time to ease into college football. Holland, however, was ready since Day 1. Playing in all 13 games as a true freshman, the 2021 Oregon prospect logged 42 tackles, 5 interceptions, and 6 pass deflections in 2018.

Holland would start all 14 games for the Ducks in 2019, registering 66 tackles, 4.5 tackles for loss, 4 picks, and 4 deflections. He received Pac-12 All-Conference honorable mention awards and was a semifinalist for the Jim Thorpe Award — handed to the nation’s best defensive back.

Despite coming off a stellar campaign, Holland did not declare for the 2020 NFL Draft. When COVID-19 complicated the college football season, Holland opted out, but the lack of tape may have hurt him in the end. Pauline says, “Holland is a good athlete and a developing safety who would’ve benefited from another season on the field in 2020. His ball skills and coverage ability are such that teams may consider him at cornerback or nickel back. Holland comes with a large upside but needs time to develop his game.”

Still one of the better defensive backs in the 2021 NFL Draft, the class has changed immensely since Holland opted out. Given he has no 2020 tape, the 2021 Oregon Pro Day becomes more critical than ever. Solid testing could take the Oregon prospect from a third-round lock to a second-round selection. Cummings thinks New Orleans, Washinton, Las Vegas, and Dallas are more likely to take a chance on Holland.

NFL Mandatory Minicamps 2021: Dates, news, and locations for all 32 teams