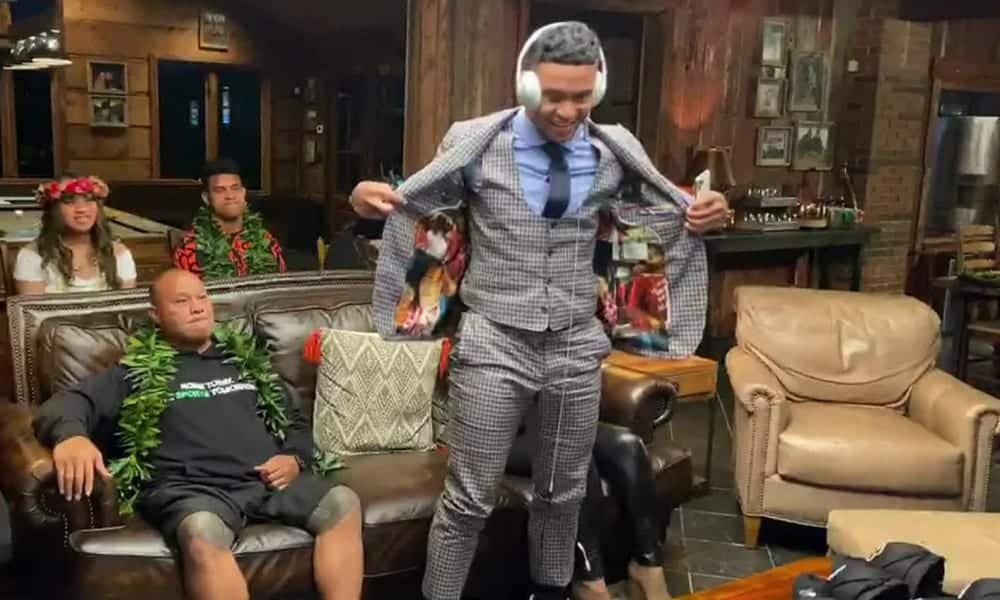 In this still image from video provided by the NFL, Tua Tagovailoa shows off the lining of his jacket during the NFL football draft Thursday, April 23, 2020, in Alabaster, Ala. (NFL via AP)
What's in this article? Click to show
Tua Tagovailoa’s Health Status
The Dolphins Quarterback Competition
Dolphins Starting QB Prop Prediction

From the moment the Miami Dolphins selected quarterback Tua Tagovailoa with the fifth overall pick in the 2020 NFL Draft, there has been rampant speculation regarding when Tua will be ready to start for the Dolphins. While the initial thought among both fans and mainstream media alike was that Tagovailoa wouldn’t play until midway through the 2020 season as a best-case scenario, that narrative has shifted over the course of the last few weeks.

Throughout the draft process and in the immediate aftermath of draft night, most analysts predicted that Tua’s rookie season would serve as a red-shirt season. The prevailing thought was that there was no way the Dolphins would risk putting their future franchise quarterback in harm’s way while coming back from a devastating hip injury suffered last season at Alabama. Any suggestion of Tagovailoa starting the season opener would have seemed laughable as recently as one month ago.

Maybe the workout videos put out by Tua’s camp have convinced people he is further along in the healing process than anticipated? Perhaps the talking heads in mainstream media just need more juicy content to drive listeners and viewers?

For whatever reason, there are now more industry voices than ever suggesting that Tagovailoa should start Week 1 for the Dolphins, but do Vegas odds-makers agree? Let’s examine some factors playing a role in whether Tua Tagovailoa will be the starting quarterback when the Dolphins take the field in September.

Tua’s talent as a signal-caller has never been up for debate. The Alabama product is a polished passer with tremendous instincts and pinpoint accuracy. He is also a natural leader who enters the locker room with at least some modicum of respect. Tua’s playmaking ability is the stuff of legend stemming from his introduction to the world in the 2018 National Championship Game against Georgia. He’s athletic enough to effectively scramble out of the pocket, although that is exactly what has gotten him into some trouble with injuries during his collegiate career.

Whenever anyone states that Tagovailoa should start Week 1 for the Dolphins, they almost always preface their claim with the words, “As long as he’s healthy” or some variation of. The problem is that we, as outsiders, have very little information at our disposal to make a true judgment on Tua’s current health status. It’s important to remember that Tagovailoa had multiple ankle injuries in addition to the catastrophic hip injury which forced him to miss the end of last season.

If he’s not 100% by the start of the season, there’s no reason to trot him out behind a young and vulnerable offensive line. The flip-side of the token is that even if his medical evaluation reveals a completely clean bill of health, there is still an argument to be made that taking the Patrick Mahomes approach and having him sit behind a veteran quarterback his rookie season is still a better plan for both the player and the team in the long run.

Ryan Fitzpatrick to Mike Gesicki and the #Dolphins take the lead with 24 seconds remaining.

The Dolphins currently have three quarterbacks on the roster with Tua joining fellow first round pick Josh Rosen in Miami. Whether Rosen remains in South Beach for this season remains a mystery, as the Dolphins have given no indication that they are actively looking to trade the former Arizona Cardinals’ first round pick. Rosen wasn’t terrible when given the opportunity to play last year, but his opportunities for stardom in this league appear to be dwindling.

Instead, veteran Ryan Fitzpatrick was the catalyst for a stunning finish that saw the Dolphins win three of their last five games and nearly cost the team a shot at drafting Tua in April. “Fitzmagic” led an undermanned Miami offense to 30+ point performances in wins over Philadelphia and Cincinnati before orchestrating a last minute drive in Foxboro that cost the Patriots a top seed in the AFC Postseason.

While the national media will continue to focus on all the reasons the Dolphins should start the rookie quarterback in Week 1, local beat writers seem to remain firmly entrenched in the camp that sees Tua sitting behind Fitzpatrick early on.

The Miami Herald’s Adam Beasley mentioned on the CBS Sports Pick Six podcast last week that Fitzpatrick had seriously contemplated retiring over the off-season but decided to come back for one more season in large part because he expects to play in 2020.

Coach Brian Flores has consistently maintained that players need to win position battles and won’t be handed over starting jobs during his regime. How might this impact Tua’s odds on starting for Miami in Week 1 of the regular season?

For gambling purposes, we need to first locate what props we have available and then attempt to identify value within these posted numbers. The “Miami Dolphins Week 1 Starting Quarterback” prop is currently available at several major bookmakers. DraftKings has Ryan Fitzpatrick as the favorite to start at -278 while Tua Tagovailoa is listed at +235 and Josh Rosen has longshot odds of +2500. FanDuel has Rosen at the exact same odds, although they have Fitzpatrick as a much stronger favorite at -550.

If you are a believer in the idea that Tua will indeed start for the Dolphins in the season opener, FanDuel is where you want to place your wager as they are currently offering +370 odds for the rookie quarterback. While I personally don’t think Miami risks putting their franchise savior out there that early, +370 odds can be enticing.

I predict that Ryan Fitzpatrick starts the first few regular season games at least, although I would refrain from placing a wager on him at -278 as there doesn’t seem to be much value in that number from a betting perspective.

You can follow me on Twitter @ChrisSmithPFN for upcoming analysis. Also, make sure to follow us @PFNBets for analysis from all of our writers on futures and draft props heading into the 2020 season.