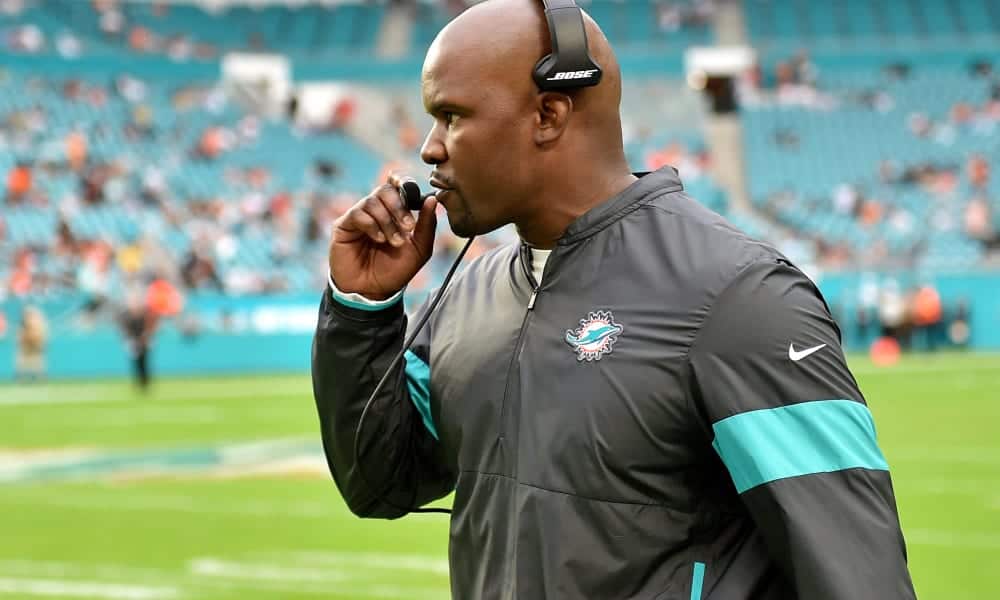 Brian Flores is the 11th head coach of the Miami Dolphins since Don Shula retired after the 1995 season. No coach has lasted five seasons, so it’s not cynicism to deduce that Dolphins fans are regularly assessing head coaches and whether they have the leadership and wherewithal to create a winning football program. One of the more integral variables that I study in young head coaches like Brian Flores is their ability to make second half adjustments.

Though the opening game script may have the sex appeal, inevitably throughout the season, it’s the resiliency and grit of making in-game adjustments that steer the fates of NFL teams. This led me to take a look at the opening possession of the second half for the Dolphins and their opponent to see what, if any, trends appeared.

Raw Data – Brian Flores and his second half adjustments

By the numbers, first possession of second half

Let’s break down the season in four-game cohorts and see how the data changes as time went on.

Brian Flores in the second half: Games 1-4

Every pimply teenager with a smartphone was trying to report the Dolphins to Twitter support for “tanking.” The 163-26 point differential made it a hard case to dismiss. Josh Rosen had taken the reigns from Ryan Fitzpatrick, and there were a lot of areas the Dolphins were a poor football team.

This cohort coincided with the stiffest competition. Flores was a new coach, installing new schemes – there would be bumps in the road. No one anticipated those bumps registering on the Richter scale, but nonetheless, Miami got punched in the mouth.

The Dolphins would end this four-game stretch with three punts and an interception; Miami’s opponents would score two touchdowns, a field goal, and punt one time.

Though the Dolphins would get their first victory against the New York Jets, the phenomenon of Brian Flores’ second half adjustments actually got worse in this cohort, despite a more palatable slate of opponents. If it weren’t for a missed 54-yard field goal vs. the Pittsburgh Steelers, all four opponents would have scored in the opening possession of the second half.

As it stands, Miami had a punt, missed field goal, and two interceptions (one of those were the coda to a 16-play drive that lasted over nine minutes vs. the Buffalo Bills). Miami’s opponents scored two touchdowns, kicked one field goal, and missed the aforementioned 54-yarder.

Here’s where the needle starts to move in the other direction in the Dolphins head coach’s favor, though objectively speaking Miami’s opponents fared better. The team would finish 2-2 after this cohort, culminating with a shootout victory over the Philadelphia Eagles.

Miami would finish with three punts and a touchdown. Miami’s opponents would score two touchdowns, throw an interception, and punt once.

Miami would echo the third cohort of games with another 2-2 overall team performance. Yet, from a second half adjustment standpoint, the Dolphins head coach improved quite dramatically. It’s the only cohort of games where the Dolphins outscored their opponent in the opening possession of the second half, and it happened three out of the four games.

The Dolphins would score two touchdowns, one field goal, and fumble it once; Miami’s opponents would result in one touchdown, one interception, and two punts.

Dolphins fans reflect with nostalgia on the Week 17 victory vs. the New England Patriots in Tom Brady’s last game in Foxborough against Miami. For extra icing on the cake, it was the second game in a row the Dolphins opened the second half with a touchdown and the Dolphins defense forcing a punt.

The most obvious, and simultaneously difficult ordeal, of integrating a new football program is showing the players “this is how we do it our way”. It involves everything from communication/language to setting a team culture and identity.

Despite a 5-11 record, the Miami Dolphins finished in the top five in most penalty categories, including fewest number of accepted penalties/yards and pre-snap penalties. A culture of accountability permeates everything Brian Flores stands for.

The coaches demand the players to dive into the culture and embrace, and one way head coaches like Brian Flores can show reciprocity is demonstrating to the players that you can adjust mid-game, when “plan A” didn’t work. And you know that Brian Flores isn’t going to be one to make excuses.

If you were to look at the numbers as a whole, you’d see Miami had twice as many turnovers, almost twice as many punts, and scored field goals and touchdowns at less than half the rate of Dolphins opponents. You’d perhaps interpret that as an indictment. Yet, Miami scored on four of its last five drives to open the second half, and Brian Flores’ defense only gave up two scores in that same time frame.

There’s more work to be done, but if the end of the 2019 regular season is any indication, Brian Flores will continue to improve his craft, and second half adjustments will come more naturally as he deepens his well of experience.