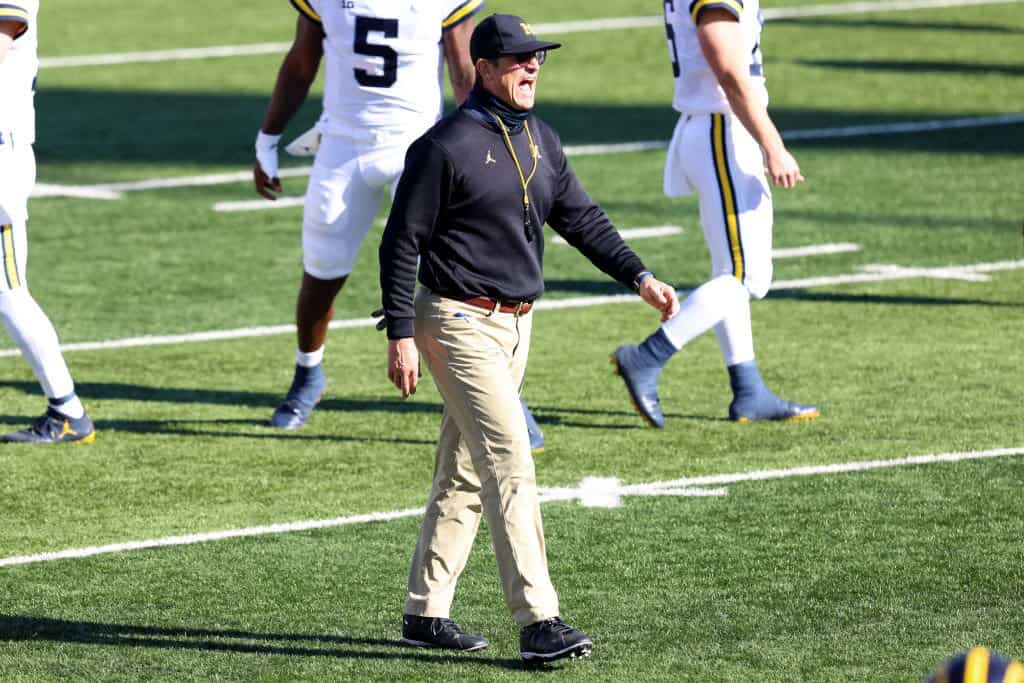 BLOOMINGTON, INDIANA - NOVEMBER 07: Head coach Jim Harbaugh of the Michigan Wolverines walks on the field calling out to his team during warm ups before the game against the Indiana Hoosiers at Memorial Stadium on November 07, 2020 in Bloomington, Indiana. (Photo by Justin Casterline/Getty Images)

As the NFL moves into its second half of the season and college football sees its schedule expand with the MAC and Pac-12 kicking off recently, let’s open up the mailbag to address some of your questions on NFL rumors, college football, and NFL Draft news.

This week’s questions cover the 49ers and Washington Football team, Notre Dame’s ACC future, fast-rising NFL Draft prospects, and much more. But first, we begin with a question about Jim Harbaugh’s future at Michigan.

Remember, if you have a question you want to send in for next week’s mailbag, you can e-mail it to asktony@pfn365.com or send a tweet to @PFN365 on Twitter using the hashtag #AskTonyPFN, and we’ll try to include it in an upcoming mailbag column.

Is there any truth to the rumors that Jim Harbaugh wants to leave Michigan and head back to the NFL? If so, where could you see him heading?

From what I’m being told at the present time, Harbaugh is not highly sought out in the NFL. The excitement for him is fractional compared to what it was for Matt Rhule at this time a year ago.

What kind of work is the Washington Football Team doing on the 2021 quarterback class? Who do you think is the best fit for them?

No more than other teams. From what I’m hearing, the big priority for Ron Rivera and company is whether they are going to hire a general manager when the season ends or keep the status quo.

We’ve all seen BYU QB Zach Wilson rise up draft boards this season. What other two or three players have greatly improved their 2021 NFL draft stock?

Azeez Ojulari of Georgia received a few fifth-round grades from scouts, which is unusual since scouts rarely grade players coming off their redshirt freshman seasons. Ojulari now grades as a top-42 pick.

Quarterback Kyle Trask was also graded as a late-round prospect before the season, and he’s improved his draft stock at least three rounds.

Virginia Tech running back Khalil Herbert, a graduate transfer from Kansas who wasn’t graded before the season, is well-liked in some areas of the scouting community. He’s having a monster year, and while many scouts grade him as a Day 3 pick, there is an opinion that he could end up as a Day 2 selection.

Tulsa linebacker Zaven Collins, who was a bit of an unknown coming into the season, has also jumped into the top-60 mix.

The 49ers had their VP of Player Personnel at Boise State to presumably watch Zach Wilson. Are there rumors that Wilson been drawing the same amount of attention from other NFL teams?

We are still very early in the process, and there are no guarantees Zach Wilson enters the draft. As I said a few weeks ago, he will go through the process once the season is over. That being said, there are a lot of teams who like Wilson.

Don’t discount the fact that the Niners were out there watching center James Empey as well. They have needs on the interior of the offensive line, and Empey — who is a junior like Wilson — is well-liked in the scouting community. He grades as a mid-round pick.

It has better talent at the top, as Trevor Lawrence and Justin Fields are graded higher than either Joe Burrow or Kyler Murray. The next couple of quarterbacks, specifically Justin Herbert and Jordan Love, would grade slightly higher than Zach Wilson or Trey Lance.

Is there any talk about Notre Dame joining the ACC for good? Or was it only for the “unique” 2020 season?

There has been talk of Notre Dame entering the ACC on a full-time basis for a few years now, so I think it’s a real possibility. The issue is that Notre Dame wants to be part of a conference for its basketball team, but it wants football to remain independent. Conferences have no issue taking the ND basketball program, just as long as the football program is included.

Do you foresee this season’s COVID-19 wild card as making kids decide to stay in school longer or leave sooner? Or is it business as usual? Are there rumors more underclassmen than normal could look to leave for the NFL?

The word all along has been that we’re going to see an inordinate number of underclassmen enter the draft due to COVID-19. Agents will use this as a tool to coax players — many who have no business entering the draft — into turning pro, just as they used the potential of labor strife last year.

I have no definite answer other than the speculation being thrown around, but in the end, we could have a record number of underclassmen enter the draft.

How do you evaluate Taulia Tagovailoa so far? He and the Terrapins were awful against Northwestern and markedly better against Minnesota and Penn State.

I haven’t watched from the lens of a scouting perspective, as this Tagovailoa is not draft-eligible. But you have to be impressed with the past two games. Saturday against Ohio State was going to be a big measuring stick, but that game is no longer being played.

Clemson’s biggest question mark remains its lack of a true No. 1 receiving threat outside. How important is it that true freshman wide receivers E.J. Williams and Ajou Ajou step up this season, or does Clemson have enough veteran depth at WR to win the National Championship?

It’s not all that important if Trevor Lawrence is on the field. Although Clemson has no dominant players at the position, they have a chance at the title with Lawrence on the field, as he makes everyone around him better.