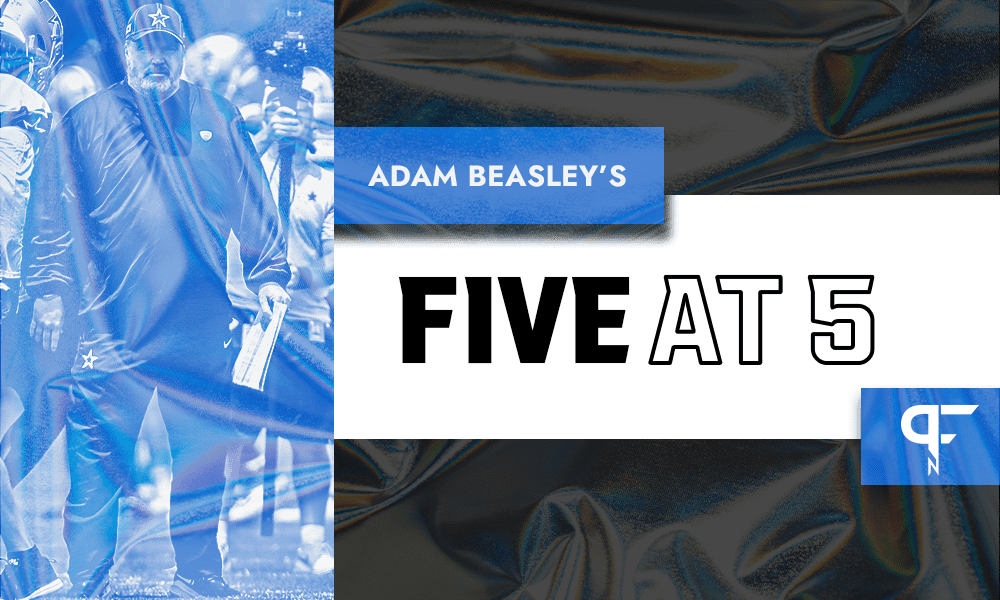 You want NFL news? We’ve got NFL news as we provide insight into a delicate time for Dallas Cowboys head coach Mike McCarthy, get updated notes on Patrick Mahomes, and draw back the curtain on how some of the NFL Draft’s top picks are spending the offseason.

The decision to make the Cowboys the stars of Hard Knocks 2021 will shine a light on coach Mike McCarthy at a time in which he probably has very little margin for error.

Dak Prescott’s injury gave McCarthy a mulligan in 2020, saving the head coach from too much blame for the Cowboys’ 6-10 season.

But that grace period is over. The expectations couldn’t be higher in Dallas this fall. And in the view of one plugged-in source, it might be NFC Championship Game or bust in Year 2 for McCarthy.

There’s a sense around the league that he didn’t wear particularly well in his first year with the Cowboys after 13 seasons in Green Bay, and his job could depend on making a deep playoff run.

Jerry Jones turns 79 in October, and few believe he’ll show the type of patience with McCarthy that he did with Jason Garrett, who lasted nine seasons in Dallas despite winning two playoff games during his tenure.

Plus, there are some around the organization a bit dubious about McCarthy’s staffing decisions.

To put it kindly, he’s a delegator and clearly wanted people around him he could trust handling a heavy workload. Joe Philbin, Joe Whitt Jr., Jeff Blasko, and Scott McCurley are all former Packers assistants working under McCarthy again in Dallas.

Were they the right picks? Does McCarthy, who reportedly skipped team meetings to get massages late in his time in Green Bay, have the inner drive needed to bring a title back to Big D? Way too early to tell, but HBO will give us an early hint next month.

Top rookies prep for the season with South Florida sun

With a heat index that approached 100 degrees, some of the NFL’s top young talent went through a full workout together on a South Florida football field Thursday in preparation for the start of training camp.

The Miami/Fort Lauderdale area is a go-to destination for players to train in the offseason. Many of them either are originally from there or have a place in town.

Patrick Mahomes looks ready-set-go for the start of training camp later this month.

The toe injury that slowed him in the Super Bowl is a thing of the past, as evidenced by recent video posted to social media of him looking spry in agility drills. He recovered enough from offseason surgery to participate in Kansas City’s spring practices.

And during a conversation with NFL Network Thursday, the 2018 NFL MVP gave the proverbial thumbs up for the season to come.

“The toe’s feeling great,” Mahomes said during an interview promoting a celebrity golf tournament. “I’m out here playing golf, being able to walk around the course. I’ve been running, cutting, jumping, throwing, doing it all. So I’m just excited to get back to training camp and have another chance to make a run at it and win the Super Bowl this year.”

What Ndamukong Suh has at times lacked in self-restraint, he has more than made up for in smarts.

Yes, he’s been fined nearly $700,000 in his 11-year career, but he’s also made it all back and plenty more in endorsements and savvy investments.

Not surprisingly, he’s on the vanguard of the player empowerment movement and weighed in on that topic on Twitter Thursday. He laid out his vision for the future in a series of bullet points, encouraging (and perhaps predicting) four changes to the sports marketing game:

Suh turned 34 this offseason, and after winning a title in 2020, probably is nearing the sunset of his career. But his second act might be even more impactful than his first.

Jon Gruden has been a better broadcaster than an NFL head coach over the past decade, but little has been known about his working relationship with Monday Night Football co-host Sean McDonough … until now.

McDonough opened up to Sports Illustrated’s Jimmy Traina recently about why they didn’t click:

“When I was hired, part of what I was instructed to do was to try to make it more conversational. Make it a little lighter, bring out more of Jon Gruden’s personality that you used to see from time to time on that quarterback show that he did, QB Camp, and get into more storytelling. …

“I think, to be totally candid, Jon Gruden enjoyed the X-and-O part of it. He loved the telestrator. He told me when I first got the job, ‘I don’t like stories.’

“There were times it came across as being awkward, and it was awkward. It was awkward for me. You’re standing there next to somebody wondering, ‘If I ask him a question about this, is he gonna answer it or is he gonna be annoyed that I asked him?’ So it was uncomfortable.”

Adam H. Beasley is the NFL Insider for Pro Football Network. Follow him on Twitter at @AdamHBeasley.