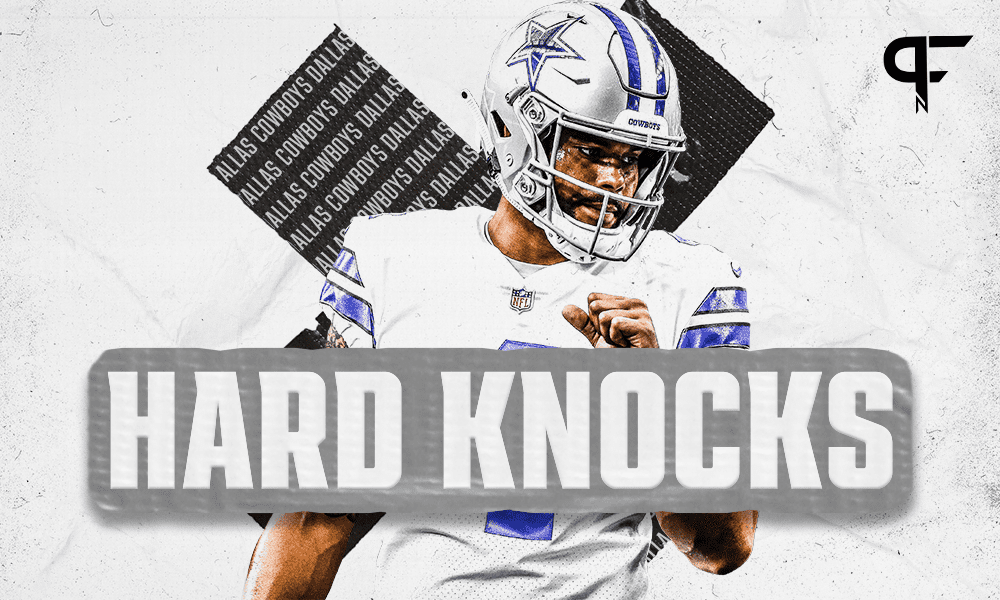 By Dalton Miller
July 2, 2021
What's in this article? Click to show
Dallas Cowboys storylines to watch for on Hard Knocks
Jerry Jones will be a star on Hard Knocks
Want more NFL news and analysis?

The Dallas Cowboys are the focus of the 16th season of HBO’s Hard Knocks. There is never a shortage of storylines surrounding America’s Team, but this year could be special. The world is getting back to some sense of normality. The Cowboys head back to Oxnard, California, for training camp. Dallas already has high expectations for the 2021 NFL season, so an even brighter national spotlight will only raise them more.

Dallas Cowboys storylines to watch for on Hard Knocks

Flip on any FS1 show for a second. If they aren’t talking about LeBron James, they’re talking about the Cowboys. Check out The One on ESPN. Is Stephen A. Smith wearing a Cowboy hat today? The reason being is because the Cowboys are the ratings darling for the NFL, and thus, the obvious choice for this season.

Now, Dallas needs to bring Joe Looney back, even if it is just as a training camp body for Hard Knocks. He’s an absolute legend.

Dak’s back: The ankle hath healed

Dak Prescott is probably the main reason the Cowboys are on Hard Knocks. There was a ton of speculation early in the offseason about how quickly he would be back and fully healthy. There were rumors of a setback and whispers of further damage than what was being reported.

However, it seems Prescott is back moving well in videos from him and his teammates training on Instagram. He was also galavanting around the College World Series on that ankle just fine.

Prescott is a lightning rod of a topic in regards to his on-field performance as a quarterback. Off the field, he’s somewhat quiet. This series will be a more intimate look at Prescott than we normally receive from his reserved and structured media sessions.

One thing Dallas’ season of Hard Knocks could help shine a light on is just how intelligent Prescott is when it comes to what he sees on the field and how he’s able to attack it. Another thing we’ll see in this setting is how great of a leader he actually is.

But the biggest spotlight could be surrounding mental health. Prescott went through it last season between the ankle injury and the shocking loss of his brother, Jace. Throughout that time, he’s opened up about his struggles with depression.

The receiving triplets: Best in the league?

Recently, the Cowboys’ receiving corps ranked second just behind the Buccaneers in PFN’s rankings. CeeDee Lamb probably has the strongest hold on social media. Michael Gallup and Amari Cooper are both quiet killers.

Still, I expect chess to play a bit of a role in the Cowboys’ season of Hard Knocks. Cooper is a big-time chess player, and he’s recently had some fun beating up on rookie Micah Parsons on the board, except for once.

It will be interesting to see the dynamic between the trio of receivers and their relationship with Prescott. We also know the disparity between the offense and defense of the Cowboys, which will be ever-present on Hard Knocks. These receivers will put on a show in front of the cameras.

What will Mike McCarthy and Kellen Moore add?

Mike McCarthy is not a particularly charming character. He’s so West Pennsylvania it hurts. However, after listening to him weekly on 105.3 The Fan’s Shan & RJ, it’s clear he knows how to have a little dry, sarcastic fun with the media.

Kellen Moore is the more interesting name. He was billed as the wiz kid coming out of Boise State. Heck, about the only reason he had a chance in the NFL was because of his football mind. This series could be part of the résumé-builder for a future head coaching job.

There are many new names and a new defensive scheme heading into the Cowboys’ trip on Hard Knocks. The most interesting defensive aspect has to be the linebacking corps. Jaylon Smith, Leighton Vander Esch, Parsons, Keanu Neal, and Jabril Cox all battling for spots on the field. Where does Dan Quinn and company have these guys line up? Who will prevail as the starters heading into the 2021 season?

Parsons will be the star of the show defensively. He has a massive personality and will have the attention of the cameras.

Seeing Randy Gregory and Tank Lawrence will be fun on the defensive side of the ball. The young secondary also should get a lot of air time. Dallas’ second-round pick in the 2021 NFL Draft — Kelvin Joseph — aka “Bossman Fat,” has to drop a couple of bars along the way, even if it’s part of a rookie ritual. Meanwhile, can Trevon Diggs take the next step in consistency and become a CB1?

Jerry Jones will be a star on Hard Knocks

Dak might be the franchise quarterback — but make no mistake — Jerry Jones is the star of the show. He’ll have the questionable metaphors leveled up to 11 for Hard Knocks. He might be 78 years old but don’t let that fool you — Jones still has his fastball.

The Hall of Famer is thrilled to be headed back to sunny California for camp. Still, what I’m most curious about is will the HBO cameras get a glimpse into the legendary party he hosts at every training camp?