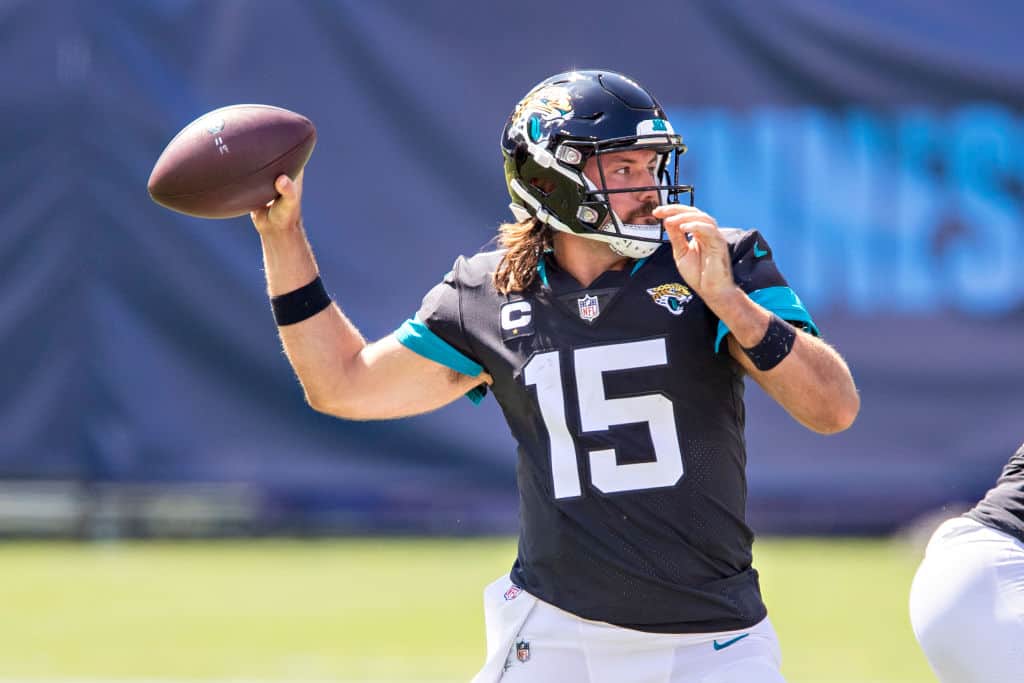 NASHVILLE, TN - SEPTEMBER 20: Gardner Minshew II #15 of the Jacksonville Jaguars throws a pass in the first half of a game against the Tennessee Titans at Nissan Stadium on September 20, 2020 in Nashville, Tennessee. (Photo by Wesley Hitt/Getty Images)

What a week it was in the NFL, and what a rebound it was for the betting team. After a 2-3 Week 1, we bounced back with a 4-1 record in Week 2. Let’s keep that going and take a look at the betting lines and who you should bet on in Week 3 of the 2020 NFL regular season (odds courtesy of FanDuel).

How crazy is it that Patrick Mahomes threw for 300 yards in a Chiefs win, yet we still look at it as an “off day?” Disbelief aside, the Chiefs had one of their worst offensive performances of the Mahomes era, being held to just nine points entering the fourth quarter before a long Tyreek Hill touchdown and a Harrison Butker 58 yard field goal lifted them over the Los Angeles Chargers in overtime.

The Ravens are 2-0 and have allowed just 22 points thus far. Keep in mind, though, their two wins came against a Browns team who is still searching for an identity and was missing a lot of key starters on defense, and Houston, who traded away their most explosive weapon in DeAndre Hopkins and has a mediocre defense at best. This isn’t to say that the Ravens aren’t talented, because they clearly are, but this will be their first true test of the season.

This is unusual territory for Kansas City, as they were an away underdog just once in 2019; Week 14 at New England, which they won. While Baltimore went 14-2 last season, they were only 2-5 against the spread as home favorites.

Jarrett’s Official Play: KC +3 (+105) 3.5 units: Lamar Jackson has never beat Mahomes, and the 33-28 score shows, as Baltimore was outplayed throughout the entire game. I don’t see the Chiefs struggling in back to back weeks, nor do I think the Ravens are better than Kansas City, as this NFL Week 3 spread would indicate.

The 49ers will head right back to MetLife Stadium, where they beat the Jets in Week 2, but not without a cost. San Francisco lost both Nick Bosa and Solomon Thomas for the season with torn ACLs, which are both considerable blows to their pass rush that is now thinning.

To make matters worse, running back Raheem Mostert has a sprained MCL, and quarterback Jimmy Garoppolo suffered a high ankle sprain. This just adds to the seemingly never-ending list of 49ers stars on the shelf, as George Kittle and Richard Sherman are also injured, as are receiver Deebo Samuel and edge rusher Dee Ford.

The Giants were also unlucky when it came to injuries, as they lost superstar running back Saquon Barkley for the year with a torn ACL. Although the Giants lost Barkley and were down 17, they closed the gap and nearly completed the comeback against Chicago but came up short in a 17-13 loss at Soldier Field.

The Giants are by no means a great team, but they may be in better shape heading into the Week 3 matchup, considering their injury list isn’t nearly as long the 49ers. In addition, they covered last week against the Bears and are 1-1 thus far against the spread.

Jarrett’s Official Play: NYG +4.5 (-115) 3 units: What this really comes down to is health. New York has their starting quarterback and, aside from Barkley, all of their offensive weapons along with an intact defense. The 49ers will more than likely be starting Nick Mullens and lacking nearly all of their star power on both sides of the ball. Don’t be surprised if the Giants win this outright.

Although the Chargers didn’t get the win in their home opener, they should be very pleased with how rookie quarterback Justin Herbert looked against the Chiefs will zero notice before getting his first career start. Herbert threw for 311 yards, one touchdown, and one interception in the loss.

The defense also played well, holding Kansas City to single-digit points through three quarters. All that said, Anthony Lynn says he is starting Tyrod Taylor if he is healthy enough to play, so the quarterback situation seems up in the air at this point.

The biggest story of this game, however, is that Carolina will be without the heart of their offense, Christian McCaffrey, who suffered a high ankle sprain in the Panthers Week 2 loss to the Buccaneers. Without McCaffrey, the Panthers lose a lot of offensive production and their biggest threat.

Not having one of the best running backs in the game will affect the run game, of course, but also the passing game. Without the fear of McCaffrey, the Chargers defense can play more toward stopping the pass and send their dominant pass rush led by Joey Bosa at Teddy Bridgewater.

Related: Carolina Panthers 2020 win total: All signs point to the under

On top of their best player being absent, the Panthers were the worst in the league at covering as home underdogs in 2019, going 0-2-1.

Jarrett’s Official Play: LAC -7.5 (-105) 2.5 units: Whether it is Taylor or Herbert getting the start, the Chargers have far more talent than the McCaffrey-less Panthers.

The Broncos are another team that the injury bug has gotten ahold of. While the loss of Von Miller before the season began was a big blow, Denver lost quarterback Drew Lock to a sprained AC joint, and he will miss anywhere between 2-6 weeks.

With Lock gone, that left Jeff Driskel to finish the game. Driskel played well in relief of the injured Lock, throwing for 256 yards, two touchdowns, and an interception before being stopped on fourth down on the Broncos final drive. In response to the Lock injury, rather than staying with Driskel, Denver signed former Jaguars and Rams quarterback Blake Bortles. Whether Bortles will get the start right away is uncertain, but it seems like Denver hopes for that sooner rather than later with the signing of the former AFC Championship game starter.

The Buccaneers seemed to get things back on track in their Week 2 victory over the Panthers. Mike Evans stepped up in the absence of Chris Godwin, Leonard Fournette had over 100 yards rushing and two touchdowns, and Tom Brady spread the ball out, completing passes to seven different receivers. The defense also played well, intercepting two Bridgewater passes and sacking the Panthers quarterback five times.

Jarrett’s Official Play: TB -6 (-120) 3 units: The Bucs are beginning to click, and their defense should be able to handle whomever Denver starts at quarterback and their sub-par offensive line that allowed seven sacks against Pittsburgh.

The Jacksonville Jaguars have defied the expectations of many. While they were all but penciled in to have the No.1 overall pick, the Jags, led by the strong right arm of Gardner Minshew, are sitting at 1-1 and very well could be 2-0. After an upset over the Colts in which Minshew went 19-20 for three touchdowns, the Jaguars fought back from a 24-7 deficit in Week 2 against the Titans to tie the game at 30, before losing in the waning minutes 33-30. While they are a young team, the Jaguars are far from pushovers.

The Miami Dolphins haven’t played horrible football; they have just shot themselves in the foot, and by they, I mean Ryan Fitzpatrick. Sure, not all of the blame can be placed on the 37-year-old journeyman, but three interceptions in Week 1 really sealed their fate. He cleaned up his act in Week 2, but the defense allowed Josh Allen to throw for a country mile and fell to 0-2.

The Jaguars are 2-0 against the spread in 2020, while Miami has covered in one of its two games. The Jaguars were 1-1 as home favorites last season, while the Dolphins were a very solid 5-3 on the road. That said, I am still giving the edge to the Jaguars, and their never say die attitude.

Jarrett’s Official Play: JAX -2.5 (-130) 2.5 units: Minshew has proven that the Jaguars don’t need to draft a quarterback next April. Not only that, he has them competing and winning. Rookie cornerback C.J. Henderson has also looked impressive in his first couple of games, as has fellow rookie K’Lavon Chaisson. Jacksonville seems to possess a fire within them that Miami simply doesn’t.

Continue for some of my NFL betting lines Week 3 leans.