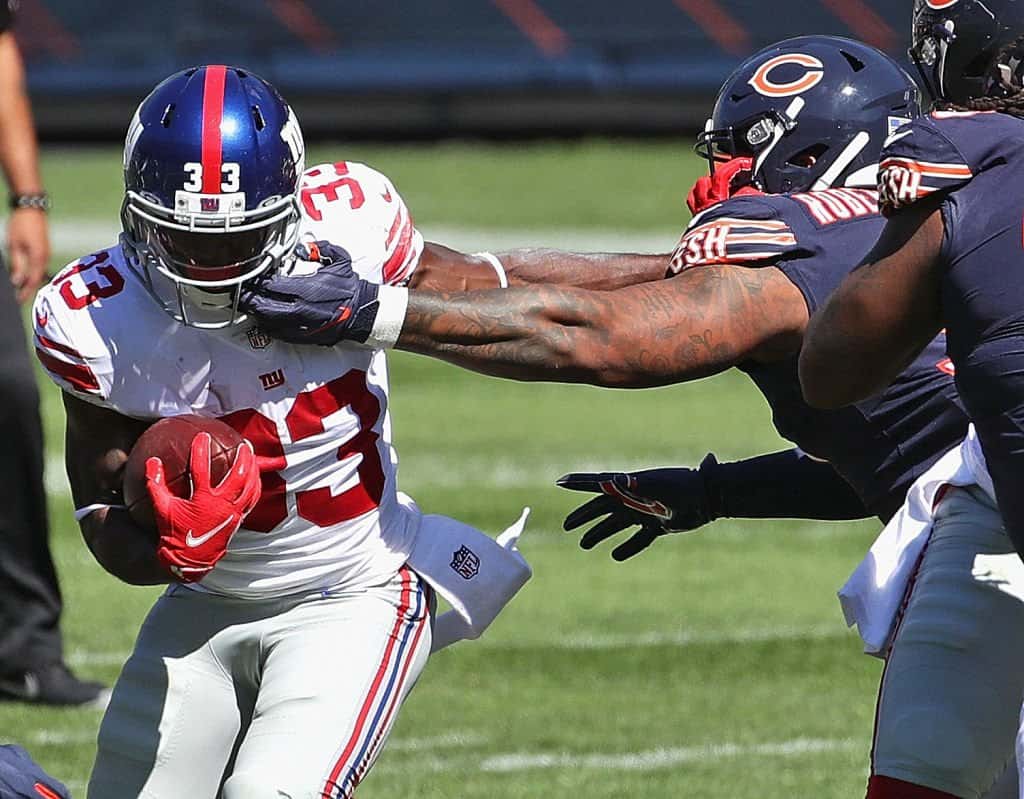 New York Giants running back Saquon Barkley is officially out for the year with an ACL injury. These kinds of knee injuries are terrible for running backs and can linger year over year if not managed correctly. Hopefully, he rests up and comes back healthy next season. In the meantime, the Giants will have to find someone to fill his place in the backfield. While there are a lot of free-agent options out there, let’s take a look at the backs on the roster that could become Barkley’s replacements for fantasy football players who just saw their first-round pick get hurt.

Pass catching RB Dion Lewis appears to be next in line for the starting job with the Giants now that Barkley is hurt. Lewis, who will turn 30 in September, was signed in the offseason as a depth piece and someone that could bring a veteran presence to the locker room. Lewis is not a spitting image of Barkley in any way, but his pass-catching abilities have been useful for fantasy managers in the past.

Lewis is likely most remembered for his time in Tennessee where he backed up Derrick Henry in 2018 and 2019, but his most fantasy-relevant season was actually back in 2017 when he last played for the New England Patriots. That season, Lewis ran 180 times for 896 yards and six touchdowns, adding 32 catches on 35 targets for 214 yards and three more touchdowns through the air.

Lewis finished as RB12 in fantasy football that year with 165 standard fantasy points, right ahead of RB Devonta Freeman. Since then, however, Lewis has been largely irrelevant, both due to his backup role on the Titans and his general “meh”-ness as a runner.

If I were a betting man, I think Lewis could be a worthy option for a lot of teams in a season riddled with injuries like 2020 has been thus far. Lewis tore his own ACL in 2015 and struggled to return to form thereafter, but it’s also possible that he was destined for greatness himself. Maybe what we’re seeing now is just the best of what’s left. At the very least, he can give his teammate some tips on recovery as he vies for the job of Barkley’s replacement for fantasy owners for the rest of this season.

The only other RB listed on the Giants depth chart is four-year RB Wayne Gallman. Gallman was drafted by the Giants in the fourth round of the 2017 draft and has been with the team ever since. In his four seasons on the team, Gallman has played in 39 out of 50 possible games but he’s been very quiet over that span. In total, Gallman has 762 yards rushing for his entire career, so he’s hardly a workhorse back who is used to putting a team on his shoulders.

That being said, Gallman was the one who took over when Barkley had an ankle injury last season, and he made a name for himself in fantasy for a brief moment in time. Most fantasy managers will likely remember that Gallman was the top waiver pickup option before Week 4 and were then rewarded with a 21.8 fantasy output that week. “Gallman is Barkley-lite! I’m gonna be fine! No need to worry!” said fantasy managers to themselves before going to sleep that week. But boy were they wrong.

In Week 5, Gallman rushed two times for 14 yards, and that was it. A true dud. Everyone who scooped him up felt duped and hurt, and who could blame them. This guy was supposed to be the best option available, and he had proven it the week before. Maybe the bye week in Week 6 would help straighten things out. Nope.

Barkley returned in Week 7, and while he was a shell of his former self, Gallman barely saw the ball again for the rest of the season. Anyone who picked up Gallman last year is likely remembering all of the pain he caused and is avoiding him like the plague this time around, and I’m not sure I can blame them. Gallman was so clearly not the answer that the team signed Lewis as a free agent on a one-year prove-it deal. If the team trusted Gallman at all, Lewis wouldn’t even be on the roster. What makes us trust him to be Barkley’s replacement for fantasy this time around?

If it ends up that Lewis is indeed the option for the Giants, look for Daniel Jones and offensive coordinator Jason Garrett to dial up the passing game a few notches. It’s already expected that the team will need to up their passing attack with their stud RB being out, but if Lewis is the guy that they think helps them the best, he could easily be an RB2 or flex option in your league as long as he’s getting the bigger share of the touches. If you can get Lewis without breaking your FAAB bank or in a trade for another bench player, do it. Otherwise, it might be best to let someone else handle the drama.

As for Gallman, it’s hard to say. If you can add him to your bench for little to no risk then go for it, but I don’t expect him to make your starting lineup anytime soon. If something happens to Lewis, then maybe, but there’s no reason holding on to him just waiting for another injury. If you miss out on Gallman you’re probably better off in the long run. With all the other injuries this week you might have multiple holes to fill anyway.

Obviously, the elephant in the room is that the Giants aren’t limited to the backs currently on their roster and they could look at another guy off the street. Even if that ends up being true, I wouldn’t be shocked if we see either Lewis or Gallman finish the year with more fantasy points than whoever they add to the team. These two have more experience and talent than most of the guys available, so depending on who the team signs, it might not be worth the headache rostering them anyway.