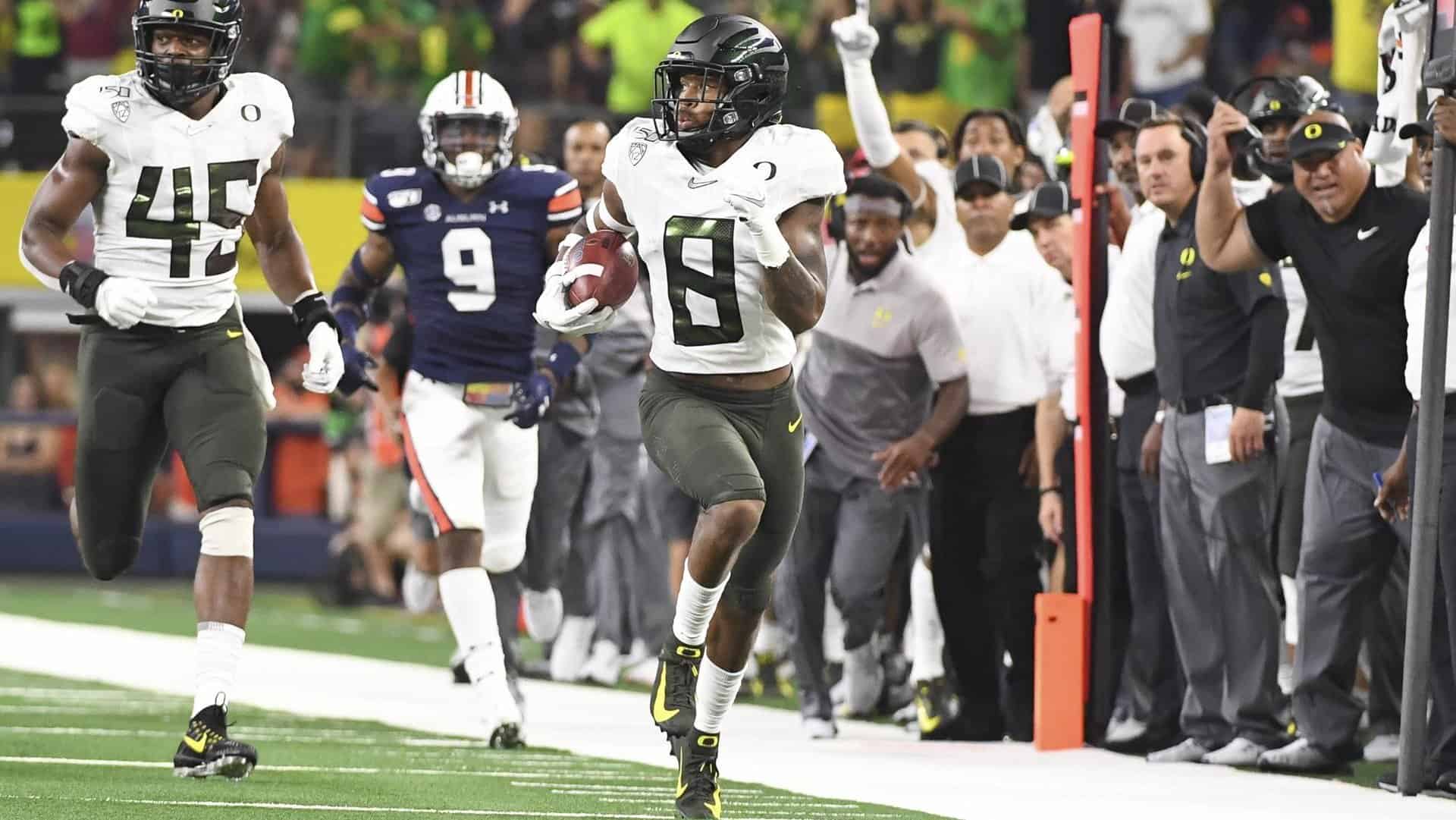 Photo Credit: Oregon Ducks
What's in this article? Click to show
Holland plays the game like we used to see it
Holland isn’t an elite slot player
Where should Holland be valued for the 2020 NFL Draft?

A large sector of the NFL Draft community has anointed prospect Jevon Holland as the top safety in the 2021 Draft class. Right from the moment I downloaded the All-22 and turned it on, I had an issue with this valuation of the player. One of the biggest issues I have is that Holland, for the most part, doesn’t necessarily play safety. He plays most of his snaps from the slot against receivers or tight ends split out wide.

That is the responsibility of a traditional safety, but it isn’t necessarily at the top of the list when we sit down to evaluate these players. He plays a large percentage of his snaps from inside or outside the shade of the slot receiver. So how do we evaluate him as a safety without a larger percentage of his reps coming from the back end, and how do we value the skillset he brings?

Holland plays the game like we used to see it

There might not be a bigger ‘football guy” in the entire 2021 Draft class. The 6-foot-1, 200-pound safety is far from the physical specimen that guys like Hamsah Nasirildeen or Talanoa Hufanga are, yet he plays the game as physically and as technically proficient as you’ll see from a safety playing downhill. That’s why Holland is looked at favorably for the NFL Draft and is so well-liked in the draft community, and especially by fans of the Oregon Ducks. He takes us all back to a day where the game was still gladiatorial.

That being said, I would like to preface this entire thing by acknowledging that Holland is a darned good football player. The hype surrounding him is warranted. His name should be up there with the best of the defensive backs in the 2021 Draft pool. But we must also address and understand the questions still surrounding his game.

This was the first of the red flags from his tape compared to what I expected going in. I was expecting a twitched up athlete that could mirror and match slot receivers while also being a menace when lined up on the back end. What I got was far different. As a lateral mover, he does a decent job of remaining in a solid base and possesses good enough foot speed to mirror.

When it comes to shiftier wide receivers or consistently remaining in good positional leverage, however, he was not consistent enough for me to give him the stamp of approval as a slot cornerback. There were too many instances where he let his eye discipline waver, even if momentarily, and he then ended up chasing an open receiver down the field.

This brings us to another problem with Holland. He’s simply not fast enough to play without precise technique and leverage. He’s not slow to the point of it being truly a detriment like USC’s Hufanga, but it does create a pause when wondering what his ceiling is as a rangy defender in a traditional safety role.

The Oregon safety shines in other ways

I really can’t emphasize this enough. Holland is good at football, and you should want him on your team. However, the lack of top-end speed precludes me from considering him as an elite player. What Holland can be at the next level is still valuable. Just because a player has flaws does not mean he is bad or can’t be a good pro. This is simply about pointing out that he, like any other prospect, is not perfect.

This is where he shines. His work against Stanford’s Colby Parkinson really showed where his value could lie at the next level. There is a very good reason why Parkinson ended up with a bunch of zeroes in the stat column. He possesses an outstanding nose for the football when it’s in the air, and he has the leaping ability and length to disrupt large tight ends at the catch point.

The ability to stack and shed against blockers by linebackers is quickly beginning to become a lost art. So, when I popped on the tape and saw this safety taking on and disengaging from blocks like an old school thumping linebacker I was very amused. Fortunately for us, it doesn’t end there. Holland’s ability to finish through ball carriers despite late-committing to the shed puts his toughness, technique, length, and lower body strength on display.

Where should Holland be valued for the 2020 NFL Draft?

This will sound like a cop-out, but it’s complicated. If you’re looking for a free safety type to roam the back end, you probably shouldn’t consider Holland at all. That’s not what he does best, and his lack of range would mean he probably never lives up to his draft position. He is scheme-specific, but that’s not necessarily a bad thing.

Holland is a decent slot defender against receivers, and he’s athletic and physical enough to stick with and play through the hands of tight ends. He will be a menace against the run and be a tone-setter on the defense. He plays like you’d want a leader to play.

It only takes one team to draft a football player, but because Holland is not a universal player as a safety prospect, it’s difficult to see his value truly be inside the top-20 like a lot of the draft community sees him. He’s still a good football player, and in the right role, he will flourish as a pro, but he must be used in that role. He’s still a top-60 player, and that is still a great compliment for Holland headed into the 2021 NFL Draft.