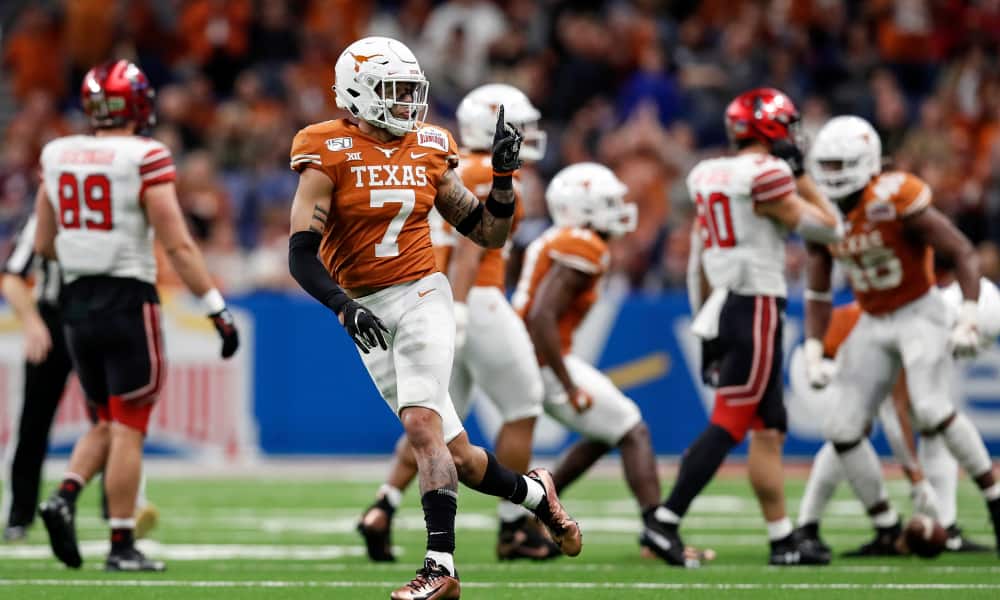 When the 2019 Sugar Bowl concluded with a 28-21 win for the Texas Longhorns, quarterback Sam Ehlinger proudly proclaimed “we’re back!” That doesn’t have anything to do with this, but we should never forget. This has been the Longhorns’ modus operandi in recent times. They recruit well, bring in those incredible athletes, and then someone allows them to leave campus after three or four years nearly the same player they were when they got there. Development on the football team in Austin, unlike the city itself, is sorely lacking. But for free safety Caden Sterns, “NFL draft prospect” doesn’t also come with a “raw” tagline.

Sterns is the ideal package for the modern-day safety

The perfect mix of size and athleticism

Listed at 6’1 and 207 pounds on the team site, Sterns possesses a mouth-watering frame that despite the listed weight, if correct, still doesn’t seem like the end of his journey. He appears lean for the weight, able to add some bulk to not only his upper body but in his legs especially. His legs take up a larger proportion of his overall frame than his torso, chest, and shoulders do. He’s certainly not skinny, but he could realistically gain 10 or so pounds to fill out a bit more.

This young man can put on the jets. As a deep safety, he has more than enough long speed to play as a single high player in cover one and should be a menace to quarterbacks when he’s playing the deep half of the field in cover two.

Sterns’ speed downhill in click and close situations really tightens throwing windows and he often takes razor-sharp angles to attempt to dislodge passes. Even though he doesn’t have that impressive ball production you’d like to see when you look at the box score, he affects more passes than he’s given credit for on the stat sheet.

His fluidity is impressive

Despite legs that seemingly go on for days, his transitions are largely clean. He’s not just a one or two-way mover either. There are players that can pedal, plant, and drive downhill and there are guys that can flip and carry downfield, but most aren’t able to do it all. Sterns has the rare ability to maintain tight stride length in his pedal, which keeps his feet efficient in transition and allows him to make that click quicker with his step frequency.

He also possesses some nice acceleration in transition, which is another pleasant surprise from someone with legs like a gazelle. There are instances where Sterns keys vertical routes a hair late and has to play catch up to remain hip to hip with the receiver, but his easy flip and long legs allow him to do just that. He also doesn’t waste any time getting from inside the hashes to the numbers, as once he pivots and drives he’s about there in the snap of your fingers.

Sterns is instinctual and assignment sound

This was probably the most staggering part about his game, as other cornerbacks, safeties, and linebackers of Longhorns past and present tend to look lost in coverage at times. It still happens, as there were multiple gaffes from others while watching Sterns consistently be in the right place at the right time.

Sterns isn’t just a deep safety, either. There were many instances of him in underneath spot and match zone coverages as well as manned up repetitions against tight ends and wide receivers, to include former LSU standout, Justin Jefferson. He actually held his own against one of the better route runners in college football in their battles outside an off-man coverage in the red zone where Jefferson hit him with a rocker step and left him wobbling like a baby deer.

When he’s able to somewhat roam as a back end safety playing a deep zone with man coverage underneath, Sterns does a fine job of reading the quarterbacks intentions and driving to the ball. He reads the shoulders well and doesn’t commit purely to eyes trying to look him off.

But the most impressive part of his game may be his peripheral vision. He’s able to pedal and flow and then somehow catch a receiver crossing from backside into an unoccupied zone, which he’ll attempt to close on to make up for a blown coverage elsewhere.

However, there are a few mishaps in coverage that come with being an instinctual player. Better quarterbacks can lie with a shoulder roll and a quick pump to get Sterns keying downhill just long enough to give a seam route a step or two vertically. Overall though, he’s certainly the more impressive safety between himself and third-round-pick Brandon Jones, his running mate for the past few years.

He needs to play with more physicality

Don’t fret, he’s not soft. He certainly isn’t tackle averse. Sterns comes forward and uses his length and athleticism to break down and wrap up with a nice hit rate. He’ll even occasionally come down and really bang if he feels he can. But he won’t be confused as Kam Chancellor, either. The one thing as a pass defender that needs improvement is his willingness and ability to reroute receivers off the line of scrimmage when he’s lined up in the slot.

More than anything though, one must hope that he becomes more physical and decisive against blockers. The instincts and aggressiveness he displays in coverage turns to passive engagement with tight ends and wide receivers when he’s part of the run fit. And when he’s coming downhill from his safety spot as the alley filler, Sterns plays passively and will often lose positional leverage, allowing the back to get outside the numbers and scamper along the sideline. Hopefully the change from defensive coordinator BJ Foster to Chris Ash, who will also coach the safeties, helps his run fitting acumen.

Any safety with his length and athleticism has first-round NFL Draft potential, but given his ability in coverage and his willingness as a tackler overall, it’s hard to see a world where he somehow falls out of the top 64.

As long as Sterns can avoid the injury bug and sharpen up a few flaws against the run, it’s hard to imagine he doesn’t hear his name called somewhere in the back half of round one. He reminds me a bit of LSU’s Grant Delpit, which is interesting because if it weren’t for Sterns’ mother, they probably would have ended up being teammates at LSU.