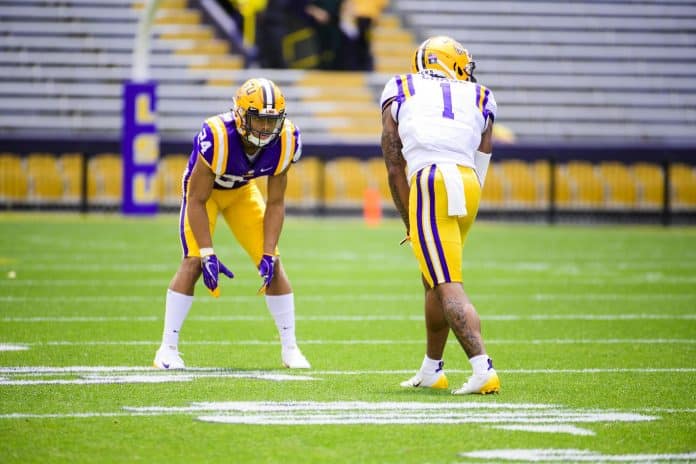 2021 NFL Draft: Who are the LSU Tigers’ top prospects?

It might be a while before the LSU Tigers match their draft output from 2020, but the LSU top prospects in the 2021 NFL Draft still provide a lot to be excited about.

LSU’s 2019 National Championship-winning team is one of the best we’ve ever seen in college football. Quarterback Joe Burrow had a historic season, which led to him being awarded the Heisman Trophy and being selected as the first overall pick by the Cincinnati Bengals in the 2020 NFL Draft. LSU’s 2020 draft class consisted of an astounding 14 players being selected, including five players in the first round. While the list of top LSU prospects for the 2021 NFL Draft won’t offer that type of talent, it does include some sensational prospects in its own right.

LSU’s 2020 Draft class, which featured the likes of Burrow, pass rusher K’Lavon Chaisson, wide receiver Justin Jefferson, linebacker Patrick Queen, and running back Clyde Edwards-Helaire, was special. It’s not often that one college program will flood the NFL with that amount of elite talent. On the Tigers’ current roster, their best draft prospect is cornerback Derek Stingley Jr., As a sophomore, however, he is not eligible for the 2021 NFL Draft.

But fear not, as the LSU program has quite a few prospects that will be at the top of NFL team’s draft boards for the 2021 Draft.

With that being said, the best player at the position from either draft class is the sensational Ja’Marr Chase from LSU. Chase is coming off an elite 2019 season, where he caught 84 passes for a mind-blowing 1,780 yards and 20 touchdowns. Even more impressive, Chase averaged 21.2 yards per reception during his brilliant sophomore season.

Chase is a great route runner, as he can seamlessly transition in and out of his breaks. He has strong mitts, outstanding body control, and is elite at the catch point. When the ball is in his hands, he is dominant, possessing the ability to break tackles are create yards in chunks.

As I have mentioned in regards to Chase previously: “Chase has extraordinary hands and can pluck the ball with ease. He is a smooth operator, who can consistently find soft spots in opposing defenses. He is a stunning deep ball threat, as he possesses the ability to run by defensive backs, and excels at winning the contested catch.”

For my money, outside of Clemson’s Trevor Lawrence and Oregon’s Penei Sewell, Chase is the best prospect in the 2021 NFL Draft. You can’t deny his production, nor his ability to create separation with ease. In today’s pass-heavy NFL, teams will be lined up to draft Chase. When all is said and done, Chase is at worst a top-10 selection in the 2021 Draft.

The mammoth LSU nose tackle Tyler Shelvin might not fill up the stat sheets, but his work is the reason why everyone around him does. For his size, he is extremely athletic, possessing impressive off-the-snap quickness. He is powerful and demonstrates the ability to take on double teams on a consistent basis.

When you watch tape on Shelvin, one thing that you notice is that his motor is always running hot. His effort is outstanding and he is absolutely stout against the run. Matt Valdovinos is a fan of Shelvin, stating: “Shelvin is a dominant run defender whose motor is always running at 150%. He has the ability to make plays down the line of scrimmage.”

It’s not often that nose tackles hear their names called on Day 1 of the draft, but Tyler Shelvin might be the exception to the rule. At worst, he is a top-40 pick in the 2021 NFL Draft. Teams that play a physical brand of football, such as the Baltimore Ravens and Pittsburgh Steelers, would be ideal landing spots for Shelvin.

The 2021 safety class is loaded and one name that warrants more attention is LSU’s JaCoby Stevens. Stevens was splendid in 2019, showcasing that he can impact the game in various ways, accumulating 92 tackles, five sacks, three interceptions, and six passes defended.

Stevens is a hybrid linebacker-safety in the mold of Derwin James. He isn’t as athletic as James, but he does offer the capacity to make plays in the box and is versatile enough to eliminate tight ends in the passing game. Against the run, Stevens is sensational, as he is extremely physical and is quick to the football.

Dalton Miller has some strong praise for Stevens, calling him “an old school gladiator that can be used as a chess piece in a modern defensive scheme. He’s a perfect candidate to cover big, physical tight ends, yet he possesses the athleticism to hang with the freak athlete tight ends as well.”

As mentioned previously, the 2021 safety class is loaded and Stevens might not even be the best hybrid of the group. Those honors go to Florida State’s Hamsah Nasirildeen. Despite this, Stevens is a solid Day 2 pick who should be able to thrive in a defense that takes advantage of his versatility.

While his teammate Ja’Marr Chase steals the headlines, Terrace Marshall Jr. is a legit wide receiver prospect in his own right. Like Chase, Marshall Jr. was extremely productive in 2019, catching 46 passes for 671 yards and a staggering 13 touchdowns. He put up this impressive production despite being sidelined for three games.

Marshall Jr. is a big-bodied wide receiver and he uses his size well. He is a capable deep threat who displays exceptional ball-tracking ability. As Tony Pauline points out, “Terrace Marshall Jr. would be the No. 1 receiver at most other universities in the nation, and he’s a legitimate next-level prospect. Marshall is slightly taller than Chase, though he’s not as fast or dynamic. He, too, possesses next-level pass-catching ability and big upside.”

While he needs some polish, Marshall Jr. possesses traits that with excite scouts and will likely be a late Day 2 selection in the 2021 NFL Draft.

Now, Cox finds himself playing in the most competitive conference in college football. He is long and athletic, certainly passing the “eye test” for the position. The combination of explosiveness and athleticism that Cox brings to the table is impressive.

Will Cox be as dominant in the SEC as he was in the Missouri Valley Conference? The answer to that question remains to be seen, but if Cox is half the player he was at North Dakota State, he will solidify himself as a Day 2 prospect in the 2021 NFL Draft.