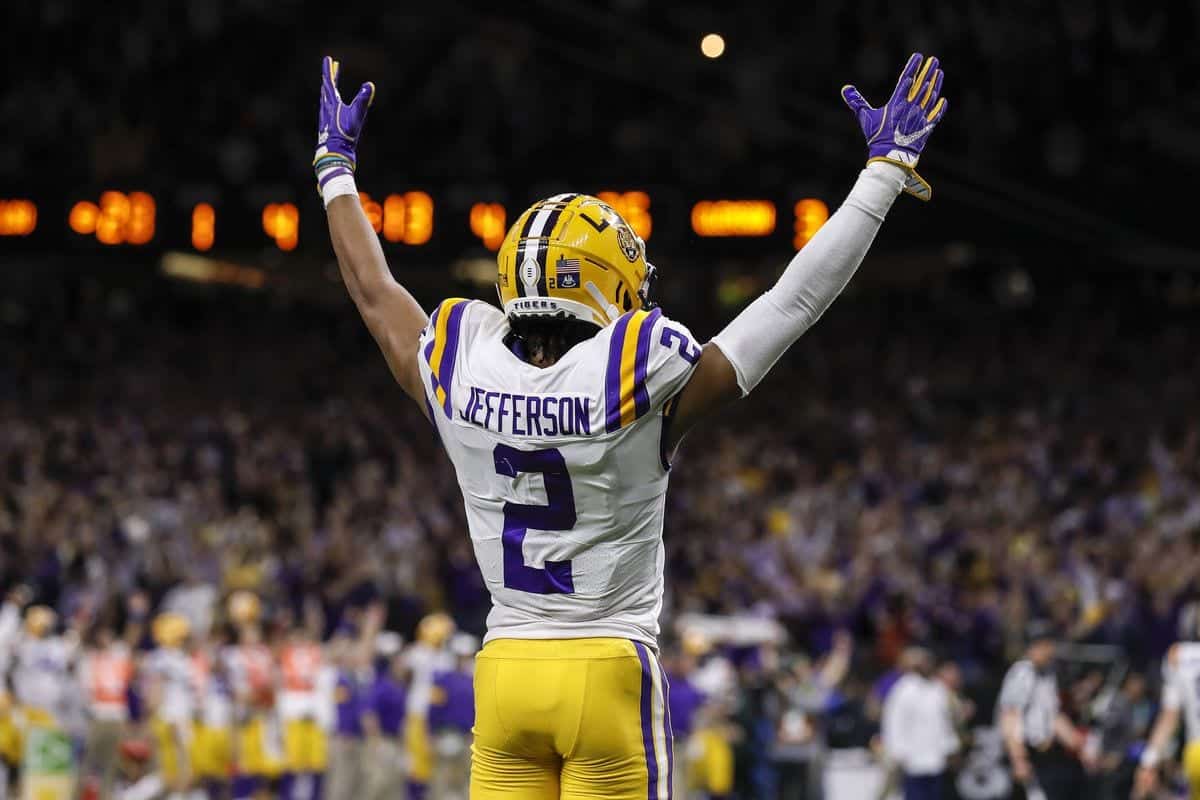 The first round of the 2020 NFL Draft has officially drawn to a close, but not without copious draft day slides and eyebrow-raising selections. Going into Thursday evening, there was growing speculation that former LSU wide receiver Justin Jefferson, a prospect widely regarded as one of the draft’s premier receiving options in a historically deep class, would not be on the board when the Philadelphia Eagles were on the clock with the 21st pick. The Philadelphia Eagles, of course, were the team most often associated with the LSU standout throughout the pre-draft process. But Jefferson would ultimately slip past Philadelphia in round 1, and carry on his legacy to the north.

Jefferson arrived in Baton Rouge in 2017, but only appeared in two games, his only contribution being a single carry for four yards. He experienced a breakthrough season in 2018, however, compiling 54 receptions for 875 yards and six touchdowns in 13 games. The LSU offense essentially went through Jefferson and running back Nick Brossette.

A top wide receiver on the nation’s most prolific offense a season ago, Jefferson finished second on the team with 111 receptions for 1,540 yards and 18 touchdowns en route to a national championship. Though hardly utilized as a vertical threat during his time in Baton Rouge — that would be Jamarr Chase — Jefferson was arguably one of the more dependable wide receivers in college football over the past two seasons.

So, how did a pro-ready prospect with significant college production slip past multiple wide receiver-needy teams in the opening round?

While Jefferson played on the outside a good bit in 2018 and experienced varying degrees of success, the 6-foot-1, 202-pound receiver was mostly relegated to slot duties in 2019, where he saw his yards per reception dip from 16.2 to 13.9. He served as a high-volume target monster last season, though, and tripled his touchdown total. But with more and more offenses looking to add dynamic, explosive components on offense, it appeared the trusty pass-catcher was bypassed for other needs, or, in Philadelphia’s case, a downfield presence.

The first logical team fit I pinpointed for Jefferson was the Dallas Cowboys at 17. Now, this inevitable snub had a lot to do with how the board fell. Oklahoma’s CeeDee Lamb — lauded by many to be the top wide receiver prospect in the class — was there for the taking by the time the Cowboys were on the clock. The prospect of adding a big-bodied perimeter pass catcher with phenomenal ball skills, coupled with the ability to manufacture yards after the catch, was ultimately too rich to pass up. Hard to fault Dallas, who pounced at the chance of assembling potentially one of the top receiving corps in football, with Amari Cooper, Michael Gallup, and Lamb.

With Lamb off the board at 17, Miami, another potentially enticing destination for Jefferson, followed the Dallas pick. Instead of adding another offensive weapon to an arsenal that already featured DeVante Parker, Preston Williams, and Albert Wilson, the Dolphins wisely made a move to acquire some much-needed protection upfront for new quarterback Tua Tagovailoa, selecting USC’s Austin Jackson.

The Jacksonville Jaguars, another team devoid of wide receiver depth, unexpectedly stumbled on edge rusher K’Lavon Chaisson at pick No. 20, and shrewdly made the call to secure the Tigers pass rusher.

Sure enough, the prospect that seemed unlikely to be on the board at 21 merely hours before dropped to the Philadelphia Eagles. But, after months of countless mock drafts slotting Jefferson to the receiver-deprived Eagles, Philadelphia opted to go in a different direction.

Since Carson Wentz has been at the helm, the Eagles have struggled to develop a long-term deep threat to grow with their young quarterback. In 2016, they tried to force Bryce Treggs into that role. A season later, they drafted Mack Hollins and Shelton Gibson to assume the role, but those plans never materialized. They were fortunate enough to have Torrey Smith on the roster, however. While the veteran struggled with drops during the regular season, Smith came alive down the stretch and played a key role in their magical Super Bowl run.

The Eagles then signed Desean Jackson last offseason — after the Mike Wallace experiment failed to pan out — and aside from a breakout debut performance, Jackson spent the entirety of 2019 on the shelf.

The glaring absence of speed resulted in a largely lethargic offense that struggled to sustain drives. In fact, aside from tight end Zach Ertz, the Eagles had little in terms of play-making pass catchers. With Wentz essentially playing out the 2019 season with one hand tied behind his back, the front office prioritized speed in 2020, which lured them to Jalen Reagor.

With Stefon Diggs now in Buffalo, the Vikings had an obvious need at wide receiver. In fact, outside of Adam Thielen, it is fair to say the cupboard is bare in terms of receiving weapons. Arizona State’s Brandon Aiyuk may have been an alluring option, or perhaps even Clemson’s Tee Higgins, but Minnesota opted to go with Jefferson, arguably the most pro-ready pass catcher of the talented bunch of prospects.

Now, Jefferson has speed, though not what I would call game-breaking speed, but often relies on other methods to get open. The lengthy receiver has an innate feel for spacing and a strong pair of hands to win on contested jump balls. He boasts inside-outside versatility, though his primary home at the next level will likely be on the inside, where he should thrive as a chain-moving first-down machine for the Vikings offense.

Minnesota could still stand to inject some explosiveness into their receiving corps later in the draft, but the prospects of adding a Day 1 starter at a position of need was simply too tempting to pass up. Jefferson will be a security blanket for quarterback Kirk Cousins and should quickly evolve into a key contributor as a rookie.