After you get past the hype of CEH, what's left is a combination of mediocre stats, a coach who's changed his ways, and an undersized running back who could very easily destroy your fantasy team from the inside. Don't let it happen to you.

The vast majority of the dynasty community is considering new Kansas City Chiefs running back Clyde Edwards-Helaire to be a lock as a top-five RB. Not only is he being drafted at the 1.01 in rookie drafts, but he’s also being taken in the first round of some startup drafts. He’s going as 13th overall per Dynasty League Football ADP data for June 2020. But why? Is Edwards-Helaire really good enough to be the 13th best player taken in a new dynasty league? Let’s see what the stats tell us.

Prior to the draft, NFL Draft Expert Tony Pauline had Edwards-Helaire as the RB4 in the class behind Jonathan Taylor, J.K. Dobbins, and D’Andre Swift. In his final mock draft before the NFL draft, Pauline picked the Chiefs to select Swift at 32 as the first RB taken, not Edwards-Helaire. On the fantasy side, most pre-NFL draft dynasty rankings had Edwards-Helaire fourth as well. In terms of talent, everyone agreed that Edwards-Helaire was a great choice, but that he wasn’t the best option on the board as a whole.

Let’s dig deeper to see how these top four rookie RBs stack up against each other in terms of raw talent and college production. 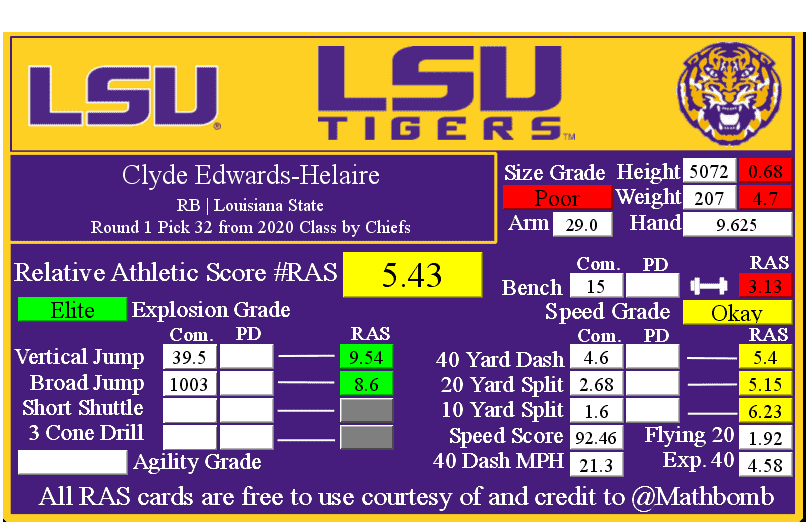 Edwards-Helaire has a Relative Athletic Score (RAS) of only 5.43 out of ten. This makes him comparable to guys like Ke’Shawn Vaughn, Eno Benjamin, and Lamical Perine. Both Taylor and Swift had higher scores, and Dobbins didn’t qualify due to skipping the combine. A score that low doesn’t instill a lot of confidence for me if I’m spending an early draft pick on him as it would mean that I am passing on more “sure things” to make that pick.

From 2000 to 2020, players who had a RAS between 5 and 8 had a single 1,000-yard season at some point in their career, accounting for only 28% of the time. That’s not great, and Edwards-Helaire is at the lower end of that range. In contrast, players who score over 8 have a 57% chance of having a 1,000-yard season. This means that Edwards-Helaire’s lower RAS makes him much less likely to be the kind of player worth drafting in the second round of startup drafts.

If we look purely at the college production of this same group, we see another trend appear. All three of the other running backs played significantly more in their college careers, but Edwards-Helaire had similar numbers for 2019. To me, this shows that while he had a great year, he might not have the longevity that we look for in dynasty since he only has one solid year of production on his resume thus far.

Regardless of college performance, the one thing everyone seems to focus on is that he went to, arguably, the best offense in the league as the first RB taken in the draft. Draft capital and landing spot are definitely huge factors in a rookie’s success, but they aren’t everything.

The draft capital and landing spots of the other top rookie running backs are all pretty similar if you ask me. Sure, Edwards-Helaire went in the first round, but is 1.32 really all that different than 2.03 or 2.09? Not really. All four went within a round of each other, and all to teams that could use help at the position. In terms of draft capital, Edwards-Helaire wasn’t taken dramatically higher than the others to warrant moving him up draft boards on that fact alone.

In addition to that, the competition for each of these rookies is also pretty similar. None of the incumbent running backs on these teams are washed up and ready to hand over the mantle to a rookie just yet. I recently covered all four running back battles between the Indianapolis Colts, Baltimore Ravens, Detroit Lions, and the Chiefs in more detail if you want to read more about the specific competition each player faces. In general, all four of these backs have their work cut out for them in 2020, as well as down the road.

In summary, it’s hard to imagine any of these rookies walking into a starting role right away without an injury or major change on the depth chart, making it even harder to spend an early-round dynasty pick on any of them, let alone Edwards-Helaire.

Something rookie running backs have to adjust to at the NFL level is the speed of the game and adjusting to a new offensive line. Based on Football Outsiders rankings of how the teams finished in 2019, Edwards-Helaire went to the worst team of the four in terms of run blocking. The Chiefs do okay in pass protection, meaning Edwards-Helaire may not be asked to do much of that initially, but as soon as NFL MVP Patrick Mahomes takes a sack because Edwards-Helaire missed a blitzing linebacker he’s going to see the bench.

Based on all of this, I firmly believe that Edwards-Helaire should still be the fourth RB taken in rookie dynasty drafts. However, everyone seems to focus on the Chiefs and their historical passing attack as a game-changer that helps elevate Edwards-Helaire to the top of the pile. What exactly is so impressive about Andy Reid’s scheme that makes Edwards-Helaire look so much better than the other rookies?

Everyone says that Andy Reid prefers a single running back that plays on all downs. He loves guys that can run hard between the tackles but who can also break outside on a screen and take it to the house. Images of Brian Westbrook and the Philadelphia Eagles of the 2000s always spring to mind whenever I think of Andy Reid, but Edwards-Helaire isn’t quite Brian Westbrook. 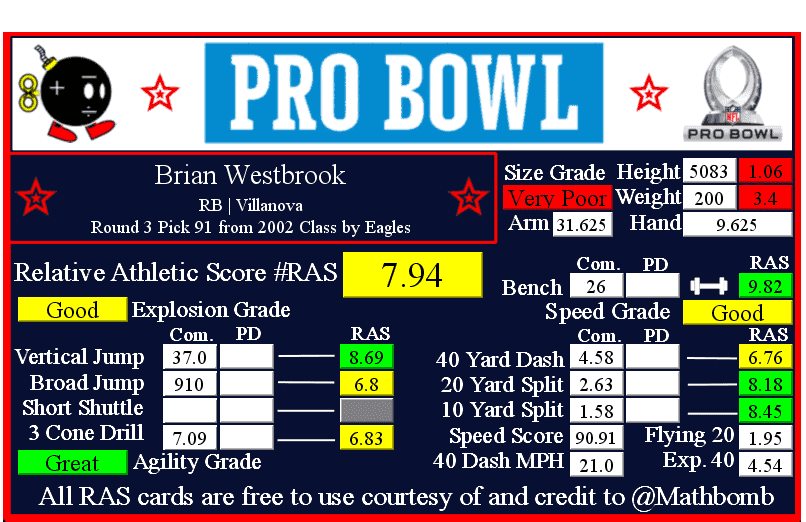 Westbrook’s RAS in 2002 was 7.94. At first glance, he and Edwards-Helaire have a few things in common such as their similar 40-yard dash times and similar height and weight, but Westbrook was better at the bench press where Edwards-Helaire was better at the vertical and broad jumps. I take this to mean that the two could play similarly in the passing game, but Edwards-Helaire’s lack of strength could be a problem between the tackles and in pass protection, as I mentioned earlier. This could keep him on the sidelines more than Westbrook was in his prime.

Another thing that’s being talked about a lot lately is that Reid likes to throw the ball to his running backs out of the backfield and that Edwards-Helaire is a specialist at this. Based on Edwards-Helaire’s 2019 stats of 55 catches for 453 yards, I’m not so sure. In addition, I’m not so sure that this is generally true of Reid, either.

In his entire coaching career, the highest number of targets that went to a single running back was 118 with Westbrook in 2007 with the Eagles. This is a very impressive number! But in Reid’s 21 seasons, the top pass-catching RB only has 70 targets or more in eight of those seasons (38%). Five of those eight years were when Westbrook himself was on the team. Outside of Westbrook, it’s hard to see a trend that makes this something Reid does in general. Instead, it looks like the gameplan they used when they had Westbrook to throw to.

On top of that, teams are moving away from the true workhorse “do-it-all” type of running back due to injury and contract concerns. This makes it difficult to project Edwards-Helaire getting 70 targets out of the Chiefs’ backfield, which greatly limits his upside. If you’re taking him in the second, you will likely be disappointed.

There is a bigger strategy in terms of dynasty startup drafts that should be discussed at this point. For the most part, WRs and QBs should be the base of your team as you build from scratch. Those players tend to last longer in the NFL and are much less volatile than RBs or TEs in terms of their surrounding situation.

In addition, rookie RBs are joining the league every year and can make an immediate impact while rookie WRs tend to struggle as they adjust to their new surroundings. If you miss out on a stellar RB in the startup draft, just wait a year and a whole new crop will be ready and waiting for you in the rookie draft.

This also means that if you are willing to risk taking an RB in the early rounds, you need to be ABSOLUTELY CERTAIN that the RB that you select will be a stud for at least 2-3 years, if not longer. To me, Edwards-Helaire is far from a certainty and is much too risky for me to take any earlier than the fourth round in startup drafts, if at all. He just hasn’t done enough in college to prove that he can do it, and teams are moving more and more to a committee approach at the position, including the Chiefs as recently as last year.

Other players going immediately after Edwards-Helaire in startup drafts include RB Josh Jacobs, fellow rookie RB Jonathan Taylor, WR Chris Godwin, WR D.J. Moore, TE George Kittle, WR JuJu Smith-Schuster, among others. Give me all of these guys over Edwards-Helaire.

I’ve already discussed how Taylor should be going ahead of Edwards-Helaire in rookie drafts and nothing has happened to change my mind yet. The rest with similar ADPs are more veteran players with a proven track record of production for at least one year. Any of these will be much more likely to help your dynasty team than taking a flier on a rookie like Edwards-Helaire. When you are starting a new dynasty team, you need to make sure that your early picks don’t blow up in your face, and we just don’t have any evidence that Edwards-Helaire can succeed yet.

Edwards-Helaire is a first-round NFL draft pick, on a great team with a lot of upside, and should go in the first five picks of your rookie drafts in dynasty. This is all true, but I am not sold on him as a stud RB just yet. Based on what we know, he’s got a very high ceiling and a very low floor. Players with lower RAS scores like his don’t generally produce well in terms of fantasy very often, and his low floor makes me pick more stable players over him when I’m drafting my own teams.

If you do take Edwards-Helaire in the second round of your dynasty startup like our own Dennis Sosic did at 2.12 in his recent mock Superflex draft, there is a high likelihood that you will regret it based on what we know today. That will be even more true for redraft or keeper leagues.

My advice, let someone else take that risk on Edwards-Helaire while you select someone more stable with those precious early picks. Don’t get risky or have “rookie fever” when you’re on the clock. You, and your dynasty team as a whole, will thank me for it.

Continue to visit the Pro Football Network for NFL news and in-depth analysis like the #PFNOSM data and NFL Draft news and analysis while also visiting our Dynasty Fantasy Football section for more coverage.