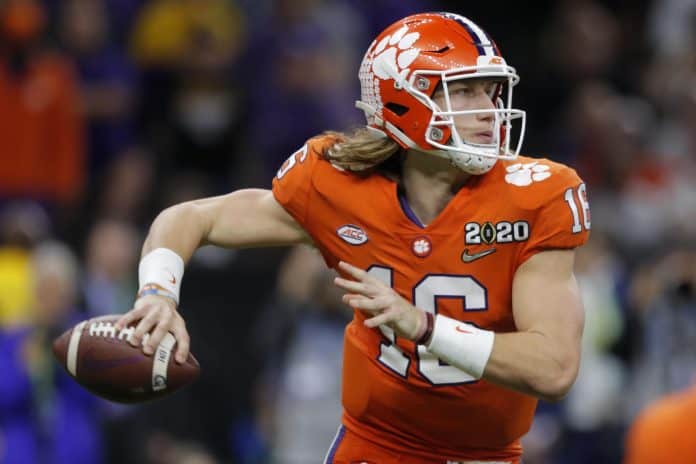 Buckle up and get ready for this 7-round 2021 NFL mock draft, which features three quarterbacks being selected within the first five picks.

The 2021 NFL Draft is roughly 8 months away, and it’s going to be as interesting as any other draft in NFL history. One word that can be used to describe the current status of the 2020 college football season is “uncertainty.” Some conferences such as the ACC and SEC plan to play the 2020 season under revised schedules, while conferences such as the Big Ten have decided to cancel fall sports. On top of this mess, many 2021 NFL Draft prospects are opting out of the 2020 season to focus on next April’s draft. In my 7-round 2021 NFL mock draft, I try to predict every pick of next year’s draft while taking all of the current chaos and uncertainty into consideration.

Each pick in all 7 rounds was made with the goal being to either fill a major position of need or select the best player available while taking things such as salary cap space, potential free agency losses, and draft capital into consideration. Spoiler alert: like a majority of 2021 mock drafts out there, Clemson’s Trevor Lawrence is the first overall pick. After the Jacksonville Jaguars select Trevor Lawrence, madness ensues.

In putting together this mock draft, the team order is as defined by the Pro Football Network Mock Draft Simulator, which uses the current Las Vegas odds for the 2020 NFL season.

Put this pick in chalk. It doesn’t matter who holds the first pick in the 2021 NFL Draft, the player being selected is Trevor Lawrence.

Lawrence just might be the most complete quarterback prospect to enter the NFL ranks since Peyton Manning in 1999. Instantly, Trevor Lawrence becomes the most legitimate offensive threat for the Jaguars since the days of Maurice Jones-Drew.

If the Washington Football Team holds the second pick in the 2021 NFL Draft, it spells the end for Dwayne Haskins in the Nation’s capital.

Fields is an electrifying dual-threat player, who should find the field immediately. While he attends Ohio State like Haskins, their games couldn’t be more different. Fields has many desired traits to thrive in today’s NFL.

The Bengals have Jonah Williams returning from injury for the 2020 season, but that shouldn’t stop them from selecting the most complete left tackle prospect we’ve seen in over a decade.

Selecting Sewell will allow Cincinnati to kick Williams inside to guard and protect Joe Burrow’s blindside with a dominant left tackle for the next decade.

Teddy Bridgewater is a solid stopgap in Carolina, but the keyword is “stopgap”. The Panthers are not a legitimate threat with Bridgewater at the helm, so it is imperative that they find a dynamic franchise quarterback.

While Trey Lance hasn’t played a high level of competition at the collegiate level, he has some tools that are reminiscent of Pat Mahomes. In a league that is driven by quarterback play, it is a no brainer that the Panthers spend this pick on a player with such intriguing upside at the position.

Not often does a game-changing linebacker enter the NFL ranks, but Micah Parsons is going to put that trend on a hiatus. Parsons is a complete linebacker, who also possesses elite pass-rushing ability. Parsons has the potential to blossom into one of the best defenders in the league.

This pick goes against the fabric of the New York Giants; however, DeAndre Baker’s arrest leaves a major hole in an already inferior Giants secondary. If the Giants want to compete in an NFC East that features Carson Wentz and Dak Prescott, they must spend significant resources in improving their pass defense.

The Lions don’t exactly need wide receiver help, as Marvin Jones is as dependable as they come and Kenny Golladay is one of the league’s ascending receivers. With that said, talents like Ja’Marr Chase do not fall into your lap too often and when they do, you run the card to the podium.

Chase is coming off the heels of a marvelous 2019 season where he hauled in 1,780 receiving yards and 20 touchdowns. Detroit’s selection of Chase would give Matthew Stafford one of the league’s best receiving corps.

Gregory Rousseau is raw, but his eye-popping production speaks for itself. Rousseau’s 15.5 sacks finished second in all of college football in 2019, only behind Ohio State’s Chase Young.

While Rousseau needs to improve the technical aspects of his game and build an arsenal of pass-rushing maneuvers, the raw talent is there for him to become a perennial double-digit sack type of player.

The Cardinals could go many routes with this pick, but ultimately they select a player that could possibly take their defensive line to the next level. Before suffering a significant hand injury in 2019, Wilson was the best defensive tackle in college football. He possesses the ability to dominate the line of scrimmage and cause constant penetration.

While this may be too rich for some, Dylan Moses is a sensational prospect that fills the Raiders’ biggest need. Moses tore his ACL prior to the 2019 season and in a surprise, he announced his intentions to return to Tuscaloosa for his senior season. Moses checks all of the boxes and brings much-needed leadership to a young Raiders’ defense.

It seems that chargers have had a need at offensive tackle for years. They signed Bryan Bulaga in the offseason, but he is better suited to play on the right side of the line. Samuel Cosmi can come in and instantly bring credibility to the left tackle position. If anything, Justin Herbert would love this pick.

In a modern-day NFL where defensive chess pieces in the mold of Derwin James and Isaiah Simmons are desired, I’d like to introduce you to Hamsah Nasirildeen. Nasirildeen has amazing God-given traits and a prolific athletic profile. He is versatile, possessing the ability to impact every facet of the game.

The Dolphins finally got their quarterback in Tua Tagovailoa and they have some good receivers in DeVante Parker and Preston Williams. With that said, their offense lacks speed, and Jaylen Waddle might just be the most electric prospect in the 2021 NFL Draft. His familiarity with Tagovailoa is an added bonus.

If Jaylen Waddle is not the most electric player in the 2021 NFL Draft, Purdue’s Rondale Moore more than likely is. Moore is coming off a significant injury; however, as a true freshman, he showcased game-changing potential.

Whether it is Nick Foles, Mitch Trubisky, or someone else, a receiver core featuring the likes of Moore and Allen Robinson is something to get excited about.

Christian Barmore is a top-10 type of talent that falls due to a limited sample size. He is powerful, explosive, and has the potential to dominate the line of scrimmage.

The clock is ticking on Olivier Vernon’s tenure as a Cleveland Brown, so the team must be searching for his successor.

Carlos Basham Jr. can set the edge and would form quite the tandem with the recently paid Myles Garrett.

Next Page: Picks 17-32
RELATED ARTICLES
NFL How to Watch