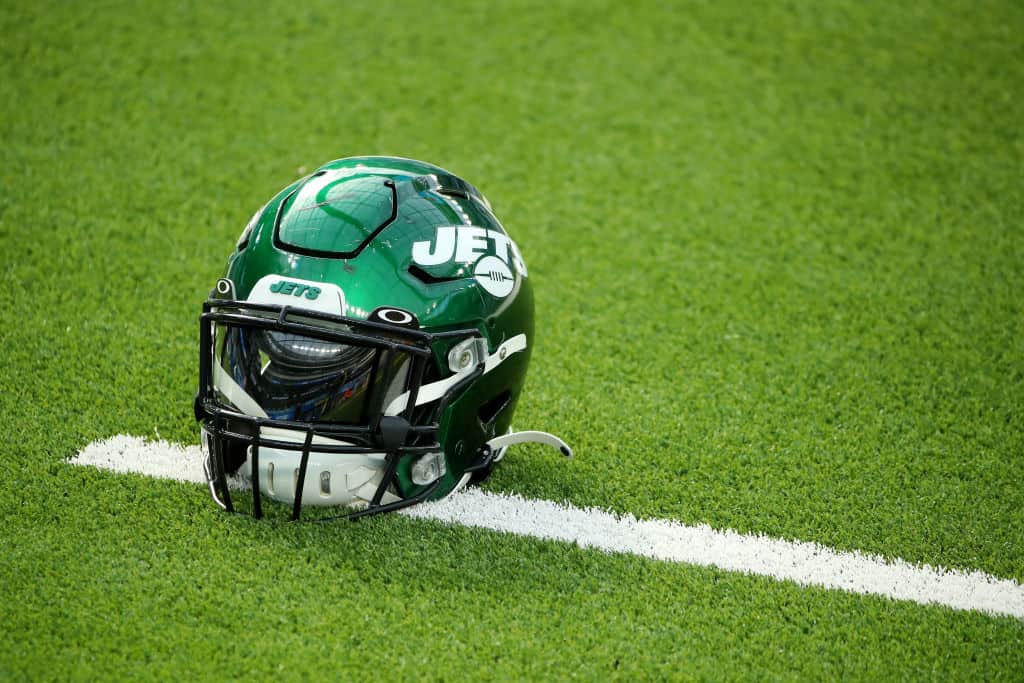 INGLEWOOD, CALIFORNIA - NOVEMBER 22: A detailed view of a New York Jets helmet before the game between the Los Angeles Chargers and the New York Jets at SoFi Stadium on November 22, 2020 in Inglewood, California. (Photo by Katelyn Mulcahy/Getty Images)
What's in this article? Click to show
Jets Pre-Senior Bowl 7-Round 2021 Mock Draft
Jets 2021 NFL Mock Draft pick-by-pick analysis
Want more 2021 NFL Draft prospect news? Want to do your own mock draft?
Finishing second in the race for Trevor Lawrence, Joe Douglas will be tasked with not only finding a franchise quarterback in the NFL Draft but hiring a new coaching staff and rebuilding a flawed roster as well. This pre-Senior Bowl Jets 7-round 2021 NFL Mock Draft attempts to take on such a tall order.
The New York Jets have officially concluded a unique season in which wins led to disappointment. Losses, however, gave fans a glimpse of the light at the end of the tunnel. In familiar New York fashion, their poor 2-14 finish still came up short in a big way.

After losing out on the Trevor Lawrence sweepstakes, New York’s brass will face two options — settle and take the draft’s second quarterback, or trade down to acquire more assets. With the uncertainties of the NFL Draft and the likelihood of picking this high next year seeming slim, it becomes clear that quarterback is the way to go.

Both Zach Wilson and Justin Fields have serious questions to answer before finding professional success, but the former has outplayed the Buckeye in 2020. Wilson’s arm talent and out of structure prowess have propelled him towards the top of big boards and mock drafts alike. He’s checked off just about every box possible en route to securing a top-five selection.

The past few seasons have played host to a suspect Jets defense, headlined by an absence of outside cornerbacks and edge rushers. Without a pass rush or quality secondary, no defense will succeed.

The Jets address one of those needs here, acquiring a converted wide receiver with unlimited potential. Derion Kendrick joins a cornerback room crowded with young players like Blessuan Austin and Bryce Hall. Despite a rough outing in the College Football Playoffs, he offers upside as a ball hawk on the boundary. Kendrick is raw, but the ability to have an athletic advantage against most WR1s would immediately place him atop the depth chart.

Vera-Tucker has played himself into the first-round conversation due to his athleticism and versatility. Although he aligned mostly at left tackle for the Trojans, many project Vera-Tucker will kick inside to start his NFL career. Given New York’s black hole of an interior offensive line group, the USC product would likely start from the jump.

Right tackle George Fant played well this past season, but an eventual shift outside may be possible for Vera-Tucker if Fant plays in a manner reminiscent of his days in Seattle. This Jets 7-round mock draft assumes Fant will not be cut, though the pick is viable either way.

Another Trojan deserving of a top-50 selection, St. Brown possesses the requisite route running and after-the-catch skills to be a Z receiver in the NFL. He can also see snaps in the slot, where he has spent much of his time at USC. Pairing him alongside Denzel Mims creates a high-upside target pool to support Wilson, a group that only gets stronger if Jamison Crowder is not cut. Whoever is calling the plays in MetLife next year would be tasked with giving Wilson easy reads. Manufactured touches to St. Brown behind the line of scrimmage would be an effective way of doing so.

The first controversial pick in this mock comes from the ACC, where Charles Snowden roamed at Virginia. Linebacker may not be a priority this offseason. Still, C.J. Mosley isn’t getting any younger, and some say Snowden may end up as a 3-4 outside linebacker, where he can rush the passer and play the run while dropping into coverage on occasion.

What makes Snowden unique is his frame and athleticism. Listed at 6-foot-7 and 240 lbs., Snowden is undeniably a freak of nature. Snowden is an absolute eraser with the size to cover tight ends, the length to terrorize mesh points, and the speed to dominate the middle of the field. He’s far from a finished product, but Snowden is a chance for general manager Joe Douglas to hit a home run at the end of day two.

Last year, Douglas drafted the man that epitomized his preferred style of play, Mekhi Becton. He has a chance to do that again, this time on the draft’s third day.

Smith is an interior offensive lineman that gives Becton a run for his money on the scale, weighing in at 330 lbs. Medical scares suppressed his stock, but Smith is a mauler that brings the size and physicality the Jets have been trying to employ.

It is yet to be seen if the current rookie guard (and fellow heavyweight) Cameron Clark will start at right guard next year. If not, Smith would only add to the run-blocking dominance set forth by Becton. A potential rookie starter in the NFL, this mock draft would have the Jets finding great value here for 2021.

New York has some difficult conversations coming up regarding their safety room. Bradley McDougald struggled mightily after departing from Seattle. Ashtyn Davis looked very much like a third-round rookie and failed to lock down a starting spot for 2021. Marcus Maye requires re-signing, but given the cost, age, and potential frustrations with the organization, there’s no guarantee he returns.

Therefore, the Jets seem destined to take a safety on day three. Washington is a somewhat late declaration who may see his stock fall due to his 5-foot-8 stature. He’ll either play free safety or nickel cornerback at the next level. Considering the uncertainty surrounding Brian Poole, Gang Green could use his services in either spot.

To end the fifth round of this 7-round Jets 2021 Mock Draft, New York fills a grave need for 2021. La’Mical Perine is not the answer at running back; neither is Frank Gore. New York desperately needs help in their running back room, and after passing on Najee Harris in the draft’s top 40 picks, Trey Sermon presents a good value pick at 135.

He lacks breakaway speed, but Sermon’s power and contact balance combine with adequate footwork to create an effective back. He can pack a punch in pass protection and stay on the field for third down. Sermon’s a far cry from the potential superstars towards the top of the class, but he’s a capable body in a room without one and would likely split time with a free agent acquisition.

Merely a depth selection, Terry offers excellent size at 6-foot-4 and the potential to make an impact in the red zone. Like most at Florida State, his stock has fallen since the summer months. He can slide in as the fourth or fifth wideout on the depth chart and provide ample depth. Terry struggles with drops and isn’t the sharpest route runner, but his size and speed will likely get him drafted.

In this 2021 NFL Mock Draft, the Jets largely focus on future starters, but the wide receiver room needs backups with size.

One name I expect to rise this draft season is Houston’s Payton Turner. At 6-foot-6 and 270 pounds, Turner has a size/speed/strength combination to die for. He’s exceptionally raw, but that won’t stop scouts from honing in on him in Mobile for the Senior Bowl.

Turner is as malleable as anyone in this class and is a coach’s dream to develop. Assuming the Jets plan on upgrading the pass rush without spending heavy capital, gambling on freaks like Snowden and Turner is the way to do it. If one hits, you’ve got your guy. In the event that two hit, your defense is elite.

The final selection of this pre-Senior Bowl Jets 7-round Mock Draft comes from the same school from which it started. Bushman was fairly highly-touted coming into the year but suffered a ruptured Achilles that ended his collegiate career. He was BYU’s leading receiver for the last three seasons, and presumably, had chemistry with Wilson.

New York will have to do everything they can to hit on their new quarterback. If that means spending a seventh-round pick on his favorite target, Douglas will gladly pull the trigger. Nevertheless, Chris Herndon’s struggles and Ryan Griffin’s limited ceiling render the Jets buyers in the tight end market this offseason. Hopefully, the picks in this 2021 NFL Mock Draft help the Jets forget about Trevor Lawrence and embrace Zach Wilson.