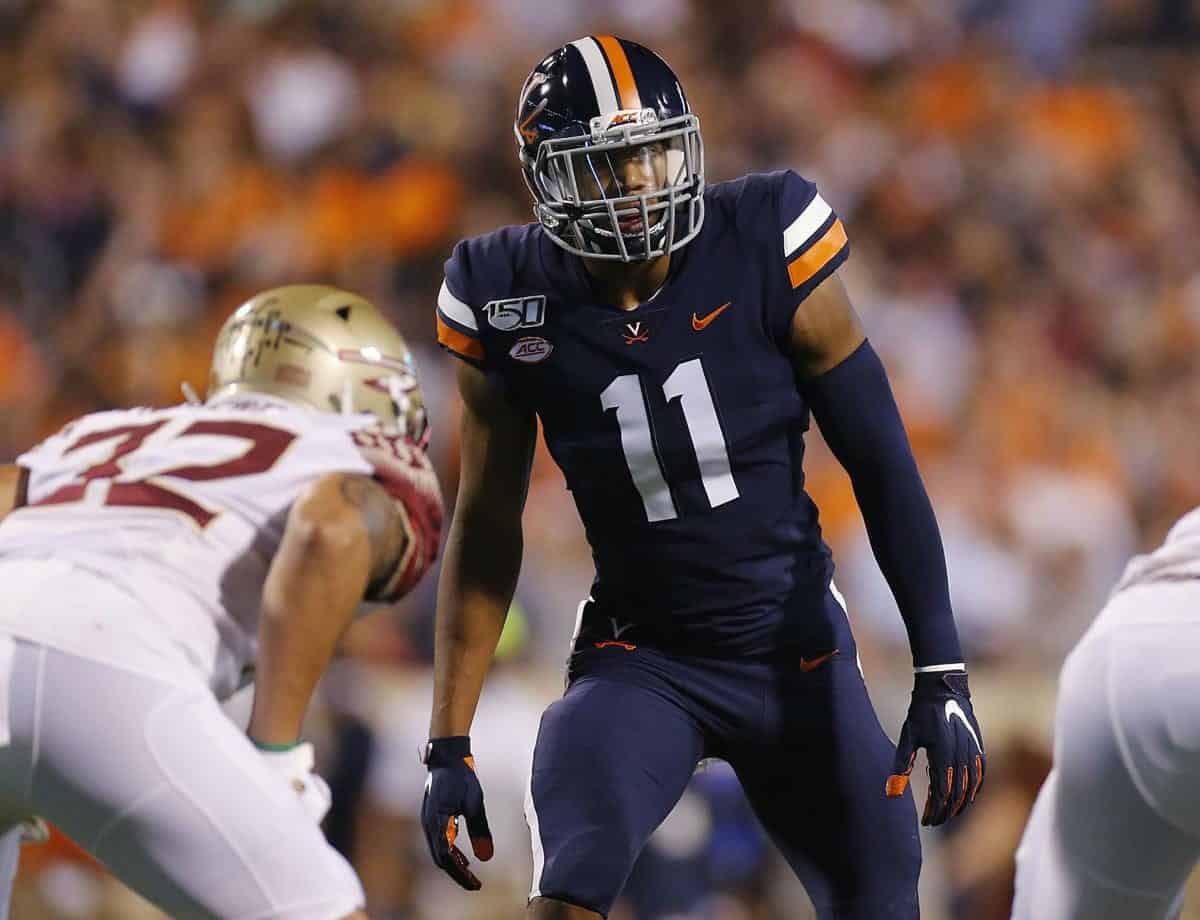 In a concerted effort to combat the growing trend of spread offenses and 12 personnel that has become increasingly prevalent in today’s game, second-level defenders that possess the requisite blend of speed, athleticism, and coverage acumen have never been more in-demand. Fortunately for Virginia Cavaliers standout linebacker Charles Snowden, his skill set fits the mold of the new-age NFL defender.

While the days of the traditional, two-down run defending linebackers are headed toward an inevitable countdown to extinction, the paradigm shift at the position has created opportunities for discarded hybrid players that would have otherwise found themselves on the outside looking in during the evaluation process.

PFN launches 2021 Mock Draft Simulator!
Although the 2021 draft season is almost a year away, it is never too early to start building your favorite team with future draft prospects. The PFN Mock Draft Simulator has been updated to include over 350 prospects in the 2021 NFL Draft Class. Choose your speed, trade all you want (for free), and put together a winning draft class for your favorite team! Click here to enter the simulator!

A two-way standout at linebacker and wide receiver for coach Gary Schnell at St. Albans High School (Washington, DC), Snowden was a highly-coveted prospect among recruiting circles. After carefully weighing his options, the heralded three-star prospect and unanimous 2016 first-team All-Interstate Athletic Conference selection ultimately decided on the University of Virginia.

Unlike many incoming freshmen who are typically coerced into assuming the oft-dreaded redshirt designation, the Washington native proved to be in the Cavaliers’ immediate plans. Appearing in 10 games as a key reserve and special teams ace in his first season, Snowden notched 13 tackles (2.0 for loss), 1.5 sacks, and a forced fumble. One of 17 true freshmen to take the field for the Cavaliers in 2017, Snowden capitalized on his scarce opportunities.

His sack on Duke quarterback Daniel Jones in the waning moments on a crucial third-and-6 proved to be a defining play in a narrow Cavaliers’ victory, and his blocked punt against a second-ranked Miami Hurricanes team exemplified the intriguing physical traits that made him such an alluring talent throughout the recruitment period.

Starting all 13 games, Snowden recorded 61 tackles (7.5 for loss), 11 passes defended, 2.5 sacks, two interceptions, one forced fumble, one fumble recovery, and one blocked kick. Snowden finished his sophomore campaign first among the nation’s linebackers in pass breakups (9) and passes defended, and his dominant performance over Louisville — which included 8 tackles (1.5 for loss), two pass breakups, 1.0 sack, and one interception — garnered ACC Linebacker of the Week recognition.

With Thornhill, Harris, and Peace graduating to the professional level the following spring, Snowden would be counted on to shoulder a distinguished leadership role in 2019.

While the 2018 season served as a building block in what has been a slow and steady return to prominence — the Cavaliers produced their first winning season since 2011 — heightened expectations surrounded the team’s 2019 prospects.

Defensively, Bryce Hall was expected to firmly entrench himself among the nation’s premier cornerbacks, the immensely talented Joey Blount was primed to fulfill Thornhill’s role on the back end, and the linebacking tandem of Snowden and Mack was among the ACC’s elite.

Aside from an early season-ending injury to Hall, the 2019 campaign that culminated in an ACC Championship clash with Clemson took many casual observers by surprise — and Snowden served as the defensive catalyst to Virginia’s resurgence.

In 14 starts, Snowden contributed 72 tackles (11.0 for loss), 5.0 sacks, and one fumble recovery. The 6-foot-7, 235-pound linebacker undoubtedly enjoyed his best performance in a victory over Old Dominion, registering 15 tackles (3.5 for loss) and 2.0 sacks, earning ACC Linebacker of the Week and Walter Camp National Defensive Player of the Week recognition. Snowden also delivered when the chips were down, producing four stops against Clemson, along with five tackles and 1.0 sack in the Orange Bowl against Florida.

Criminally overshadowed by many of his ACC counterparts over the past two seasons, Snowden enters the 2020 season as one of the premier linebackers in college football.

Aside from his tantalizing athleticism and rare size for the position, Snowden offers exceptional closing speed, innate instincts, sideline-to-sideline range, and the ability to match up with a myriad of moveable offensive weapons.

His enormous wingspan often shortens throwing windows, and his wiry frame and short-area quickness play to his advantage in space. Snowden’s early-season performances against Georgia and Clemson will serve as crucial measuring sticks in determining his draft stock.

Snowden has the requisite intangibles that suggest he could feasibly evolve into a blue-chip prospect by season’s end. Though his ideal fit will be as a 3-4 outside linebacker at the next level, Snowden offers the versatility to thrive in multiple schemes.

The Washington native is still very much in the developmental stage and has yet to scratch the surface of his capabilities, so I anticipate Snowden adding some much-needed size to fill out his hulking frame in the coming months.

If Snowden can continue his upward trajectory in 2020 and refine certain areas of his game to maximize his potential at the next level, the Cavaliers standout will assuredly be a rapid riser come draft season.