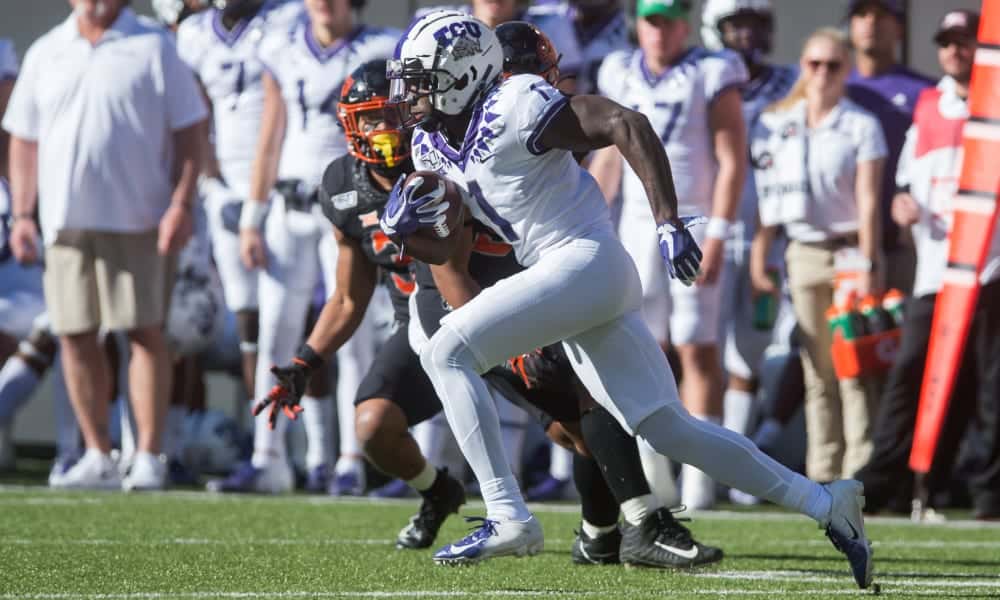 The 2020 NFL Draft will likely be remembered as one of the deepest wide receiver classes that we have ever seen. In total, six receivers were taken in the first round, with another seven in the second round. Of the first 64 picks, 13 were wide receivers, making up close to a quarter of the draft pool across those first two rounds. For the most part, the order of the picks was exactly as expected, but there was one pick that shocked the majority of people watching the coverage.

While Jalen Reagor was a surprise pick at 21st overall by the Philadelphia Eagles, his selection may actually provide an opportunity for a great value in dynasty leagues when it comes to the 2020 rookie class.

Heading into the 2020 NFL Draft process, Reagor was considered to be a wide receiver who offered a lot of danger as a speed threat. Then he turned in a strange performance at the combine, where his overall time was good, but his splits and agility grades were among the worst at the position. However, Reagor appears to have bulked up for the combine, weighing in around 15 pounds heavier than his playing weight, which may have contributed to a performance that left many scratching their heads.

When you watch Reagor on tape, however, his ability to get in and out of breaks stands out, and he can create separation with ease. A receiver with the abilities that Reagor has shown on tape, to be able to blow defenders away off the line in press coverage, but also make smooth and effective cuts to get the ball underneath if the cornerback gives him space, is as dangerous as it comes for an NFL offense.

Now that they have taken the risk of drafting him, the Eagles need to get Reagor to what they feel is the optimal weight for him to be able to avoid injury, but also get back to being the player he was in college. Physicality is never going to be his strong point, measuring in at 5’10, so they need to work on getting him open using the natural abilities he does have. If the Eagles can get him playing as he did at TCU, then Reagor could be a very dangerous weapon in that Philadelphia offense.

Philadelphia is perhaps the dream landing spot for any wide receiver in this class. Among the receivers on the Eagles last year, only one played more than 50% of snaps, Nelson Agholor, and he is not on the team anymore. So while Reagor may not be considered a starter in that offense right now, with DeSean Jackson, Marquise Goodwin, and Alshon Jeffery on the team, history would suggest he will have a chance to replace them on the field pretty quickly.

Reagor has the chance to be Carson Wentz’s dream target as he is not only able to get deep, but he can create space off of his cuts as well. If he continues those traits in the NFL, then he is quickly going to find Wentz looking his way regularly in 2020 and beyond.

While his college stats may be underwhelming, they do not tell the full story for Reagor. If you go and find any game from last season, you will find an example of Reagor getting wide open only for his quarterback to miss him. In some cases, this has been blamed on Reagor’s inability to track the ball, but on many receptions, he has shown a remarkable ability to track the ball and bring it in. With Wentz throwing him the ball, the issue of simply having his quarterback fail to get him the ball when open should reduce.

Could Reagor be the best value wide receiver in 2020 dynasty drafts?

The overwhelming reaction to the Eagles picking Reagor has been negative, especially with Justin Jefferson still on the board. However, that negativity could present opportunities in dynasty leagues. It is hard sometimes to separate negativity surrounding a draft pick with his value in fantasy, but they are two very separate things.

That has led to Reagor going as around the 10th wide receiver overall on some sites, which is superb value. Not many receivers have a better chance to be an immediate contributor than Reagor. Yes, the depth chart is crowded, but we have already discussed the injury concerns among the top-three options. Jerry Jeudy and Henry Ruggs should both be immediate starters, as should Justin Jefferson. However, CeeDee Lamb could find himself penciled in as the third receiver on a team that very much loves their running game, and Tee Higgins is also in a very crowded depth chart in Cincinnati. Short-term, Reagor could become a contributor quicker than many in this class.

Looking longer-term and the future is just as rosy. The likelihood is that both Jackson and Jeffery are on their last year or two in Philadelphia, and Goodwin is no lock to stick around beyond this year. That could leave Reagor as the top option among the receivers as soon as 2021. While he will still have to contend for targets with the tight end position that the Eagles love to utilize, he could be a 100 target receiver as soon as 2021.

His slight frame does give me some concern for injury, especially as the Eagles seem unable to keep their receivers healthy. Injuries here and there can be hard to avoid for a position that is so often left vulnerable by stretching out for receptions and cutting in the open field. Reagor’s speed and slippery play should hopefully help him avoid big collisions and keep him on the field.

Entering rookie drafts in 2020, Reagor is firmly in my top-five receivers, and in non-Superflex formats is a receiver I am targeting with the eighth or ninth pick in the first round. In Superflex, he slips a fraction, with the addition of Justin Herbert, Joe Burrow, and Tua Tagovailoa to the first round, but he should still be a late first-round pick. If you are challenging this year, I may even consider him over Lamb as the second receiver off the board behind Jeudy.