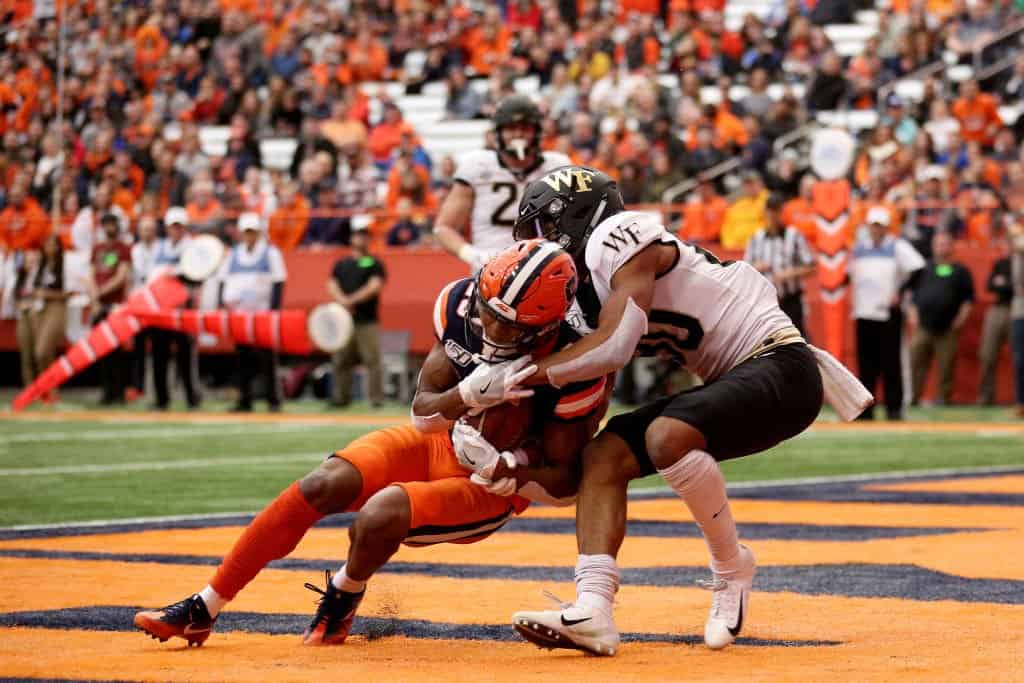 Four years ago, UConn defensive back Obi Melifonwu drew the attention of the nation with an absurd NFL Combine performance. Now, in 2021, his younger brother, Syracuse cornerback Ifeatu Melifonwu, hopes to distinguish himself similarly at the 2021 NFL Draft.

Positives: Athletic cornerback with outstanding size and upside potential. Smooth flipping his hips in transition, stays with assignments, and effectively covers receivers on crossing patterns. Runs downfield with receivers, has a nice move to the throw, and bursts to the ball out of his plant.

Engages receivers at the line of scrimmage and mixes it up throughout the route. Keeps the action in front of him. Fires upfield and gives effort defending the run or screen passes.

Negatives: Must improve his backpedal, as he’s neither quick nor fluid moving in reverse. Loses the receiver he’s supposed to be covering on occasion. Shows hesitation in his game.

Analysis: Melifonwu is a physical specimen who flashes ability but must improve the details of his position. Better facing the action, he may ultimately move inside to safety and comes with a large upside.

When his brother Obi was drafted, Ifeatu Melifonwu was wrapping up the recruiting process. He was due to enroll with the Syracuse Orange. The younger Melifonwu followed in the footsteps of his brother from an early age. Like his brother, he was a well-sized, athletic high school prospect, and football appeared to be in his future. He played running back, receiver, and cornerback, and excelled in all areas.

Melifonwu was a three-star recruit in the 2017 class. He could have followed his brother’s footsteps even closer, as the UConn Huskies offered him a scholarship. Yet, Ifeatu Melifonwu instead chose to sign with the Syracuse Orange, choosing to help build with second-year head coach Dino Babers.

Melifonwu redshirted his first season with the Orange. Still needing to polish, he chose to sit and learn for his first season. He also packed on extra pounds to better ready his frame for the college level.

In 2018, Melifonwu saw his first playing time as a true freshman. He wasn’t a starter, but he put in the work on special teams and got his first chance to show his defensive promise against the Tar Heels in October. After one starting CB got hurt, Melifonwu came in and delivered four pass breakups, as well as a tackle for loss. From there, his potential was evident. He’d be rewarded for his flashes the next season.

Melifonwu’s elevation to a starting role

In his redshirt sophomore season, Melifonwu became a full-time starter. He logged 20 tackles, two interceptions, and seven deflections in nine games. His production began to warrant NFL Draft hype, something he’d already been getting with his name. Now, Melifonwu was starting to back it up.

Still needing more growth, Melifonwu came back in 2020 and continued to produce. Despite the Orange going 1-10, Melifonwu added to his career totals. The Syracuse cornerback more than doubled his tackle output with 54 total takedowns. He also earned 3.0 tackles for loss, 1.0 sack, one interception, and six pass breakups.

The Associated Press gave him second-team All-ACC recognition. On top of his on-field accomplishments, he also made the All-ACC Academic Team twice in his career.

Melifonwu, Trill Williams, and upstart freshman Garrett Williams (who’s a prospect to watch in the coming years) made a name for themselves as one of college football’s better CB groups. But Garrett Williams will be on his own next year.

On December 18, 2020, Adam Schefter reported that Melifonwu intended to enter the 2021 NFL Draft along with Andre Cisco. The decision meant forgoing his final year of eligibility at Syracuse. Melifonwu also accepted an invite to the 2021 Reese’s Senior Bowl. There, he received an opportunity to keep setting himself apart with his traits.

Like his brother before him, Ifeatu comes with great upside. Standing at around 6-foot-3, 205 pounds, he is a tall, long cornerback with a big radius when making plays. Melifonwu’s length allows him to blanket wide receivers in man coverage. He also has the wingspan to be a dangerous defender in zone. Furthermore, he’s proactive in using his length. He can be disruptive and physical, both in press coverage and at the catch point.

Melfionwu’s testing confirmed what was visible on tape: The Syracuse cornerback is an elite athlete. Melifonwu logged a Relative Athletic Score of 9.69, with a 4.48 40-yard dash, a 1.48 10-yard split, a 41.5-inch vertical, a 134-inch broad jump, and 16 bench reps. Even in a hyper-athletic cornerback class, Melifonwu has better tools than most.

Melifonwu also uses his physical tools fairly well. He combines them with decent instincts and flashes of processing speed. As Nick Farabaugh wrote in an earlier article on Melifonwu, he has the ability to recognize tells in a receiver’s route running, and how to anticipate and jump in-breaking routes. He can be more consistent here, as we’ll explain soon. But the fact that he shows the capacity for that kind of awareness is promising.

Where can Melifonwu improve?

Melifonwu has a terrific physical foundation. He’s also fairly smart and skilled. The key at the next level for the Syracuse cornerback will be consistency. As one might expect from a prospect of his mold, he is somewhat raw. There are times when improper use of his length can get him into trouble. He can also make the wrong reads at times, especially in zone.

While he shows flashes of anticipation and route identification, he’ll need to act on those keys with more consistency at the NFL level. Otherwise, his lapses could yield big plays.

Among other things, Melifonwu can also bring more play strength and pace in run defense. He improved in 2020, but there remain several traits that lack consistency on his profile. Luckily, he has the athleticism, length, and mental aspect to be a playmaker. However, if he wants to reach his max projection, he’ll have to continue to refine his mental game and turn those flashes into the expectation.

Ifeatu Melifonwu is one player whose projection will likely be all across the board. It will likely depend on who you ask.

He still has quite a bit of refinement to undergo at the NFL level. His athletic profile, however, is one of the most enticing in this cornerback class. He’s long, athletic, physical, and he has the upside and ingrained versatility to be position-diverse in the secondary. You always want to have the “investment” mindset in the NFL Draft. An investment in Melifonwu has the potential to bear serious fruit in the long run.

Of course, the value of that investment still deserves careful thought. Melifonwu is an exciting prospect with both boundary CB and safety potential. But is he worth a Round 1 pick? I think he is, especially after seeing him play well at the Senior Bowl. However, he may be a better value acquisition early on Day 2.

There are still some questions regarding the Syracuse cornerback’s consistency. He clearly has the athletic promise and play-by-play urgency. Nevertheless, there is a need for polish in several areas. Of course, as we’ve seen in the past, athleticism can be a driving tool for prospects. Elite athletes sometimes go higher than their current state of polish demands. This is simply because they have the potential to do more.

Teams that could covet Melifonwu’s traits

Having said that, Melifonwu seems like a solid Day 2 pick who could sneak into Round 1. Factoring in his athleticism and the relative subjectivity of this year’s CB rankings, it seems like a perfect storm for Melifonwu to rise. Teams like the Washington Football Team, Seattle Seahawks, San Francisco 49ers, and Tennessee Titans could use his upside and versatility at that price. But the potential suitors expand beyond that.

Some might be scared of selecting Melifonwu after seeing his brother underwhelm with the New England Patriots and Las Vegas Raiders after going in Round 2. I wouldn’t conflate the two. Ifeatu is different. Although he too isn’t perfect, he’s a much better prospect, and he also has the same upside — upside which can be magnified in the right situation.