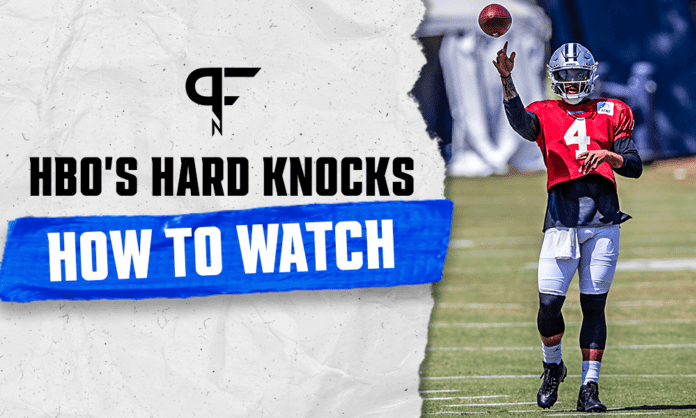 Hard Knocks on HBO often marks the unofficial beginning of the NFL season, but how can you watch the 2021 premiere on August 10?

By Ben Rolfe
August 3, 2021
What's in this article? Click to show
How to watch Hard Knocks
HBO’s NFL training camp show featuring the Dallas Cowboys
Will we witness another version of the Jerry Jones show on Hard Knocks in 2021?

The latest series of HBO’s Hard Knocks will feature the Dallas Cowboys and will premiere on August 10. “America’s Team” is already the franchise that people love to hate, and their appearance as part of HBO’s latest sports offering will likely only cement that status. Let’s take a look at how you can watch the premiere of Hard Knocks on HBO.

How to watch Hard Knocks

The 2021 Hard Knocks series will be available to watch on HBO. Alternatively, the series is available to stream on HBO Max.

HBO Max can be purchased for $9.99 a month ($99.99 for a full year) for the version containing adverts. The ad-free version costs $14.99 a month or $149.99 a year. If you have HBO, you most likely already have access to HBO Max. The service is available to stream on numerous devices, including Amazon, Android devices, Apple TV, Google Chromecast, and Roku.

You can also add HBO Max to Amazon Prime and Hulu subscriptions for $14.99 a month.

After the Los Angeles Rams and Chargers took center stage on Hard Knocks in 2020, it is the Cowboys’ turn in the spotlight. There are several intriguing storylines heading into the show’s premiere.

The biggest storyline will of course revolve around QB Dak Prescott. Coming off his ankle injury, and now with an additional injury in 2021, how will the Cowboys’ QB fair?

After a tough first season, head coach Mike McCarthy is under the spotlight. Not always viewed as the most charismatic of head coaches in the NFL, all eyes will be on the leader of the Cowboys. Can he lead his team to the playoffs in 2021, or could Hard Knocks reveal the beginning of the end of his time in Dallas?

In terms of other on-field storylines, there are already injury questions surrounding Amari Cooper and Demarcus Lawrence. There will be a number of Cowboys fans desperate to see how those two superstars are handling their return to the field. Elsewhere, we already saw an injury to Michael Gallup early in Cowboys’ training camp.

The performance of the Cowboys’ defense will also be in sharp focus. With an explosive offense expected in 2021, the defense is viewed as the weak link. Can they put together a strong camp and preseason heading into the 2021 season?

Will we witness another version of the Jerry Jones show on Hard Knocks in 2021?

The Cowboys were previously featured on the Amazon Prime special of All or Nothing in 2017. While the show was following the story of the team’s season, it was the Jones family that really took center stage.

The Jones family, especially Jerry Jones, are never far from the headlines when the Cowboys are involved. That will likely be no different on Hard Knocks this year. The Cowboys have made big financial commitments to players in recent years. Expect to see a lot of posturing and excitement from the entire Jones family in the coming weeks.