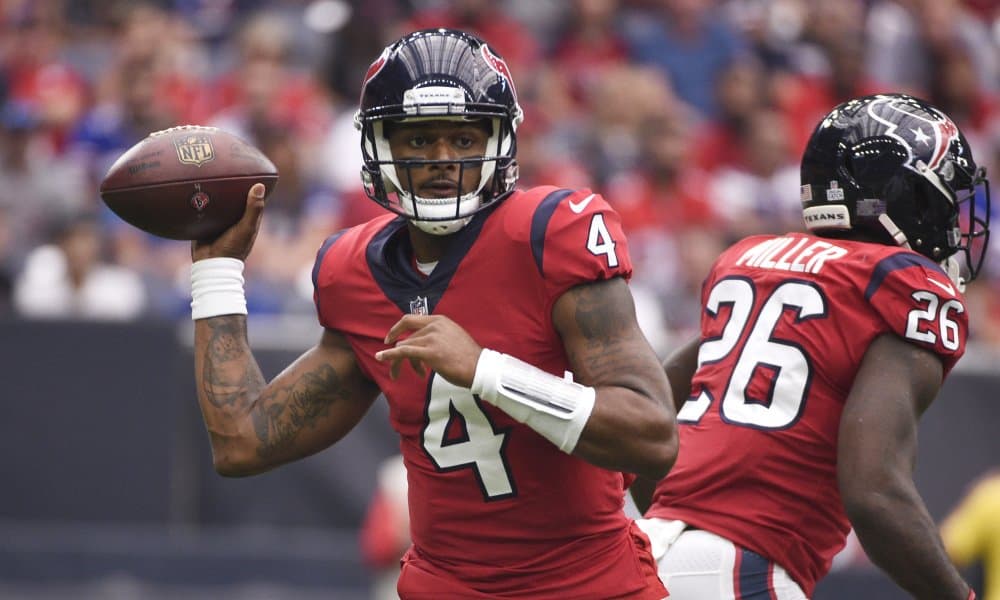 When you look back on historic teams such as the 2010 Seattle Seahawks, among many others, you can’t help but admire the young core which was instrumental in their success. The Seahawks drafted well, had the right pieces in place and ultimately reached their goal of hoisting the Lombardi Trophy. This is a testament to how quickly a successful franchise can be built.

In terms of roster construction, it starts with the quarterback. Luckily for the Texans, Deshaun Watson just happens to be one of the best young signal-callers in the game. With a franchise QB as the team’s best building block, Houston has glory in their grasp – just as long as they continue to build around him.

The NFL has continued to evolve into a young man’s game. When teams lump together a sound core of young players within recent draft cycles, the expectations are seemingly endless. Who else joins Watson as the top building blocks of the Houston Texans?

A prime breakout candidate for the Texans, Keke Coutee enters his sophomore season with high expectations. The perfect compliment to DeAndre Hopkins and Will Fuller, Keke Coutee stayed in-state after spending his college days at Texas Tech. Hopkins can expose opposing defenses in any area of the field, while Fuller is the homerun hitter.

Where Coutee is best implemented is in the underneath game. While he has the speed to stretch the field, Coutee is a menace in space and chews up yards off of drag routes. The drafting of Coutee provided Houston with a trifecta aerial attack. Each of their starters brings a diverse skillset and attacks different levels of the field.

Despite being limited to six games, Coutee posted solid production. He was on pace to rank third among rookie receivers in receiving yards, behind Calvin Ridley and D.J. Moore – the only WRs selected in the first round of the 2018 NFL Draft.

Returning for the AFC Wildcard round, Coutee lit up Indy’s secondary for the second time in two games. He could be a key piece in the rivalry. With hopefully a full, healthy 16 game season to the ledger, Coutee will establish himself as a lethal weapon in the Texans’ offense.

Keke Coutee vs everyone else (5 games):

If not for injuries, Will Fuller could find himself higher on this list and a more highly regarded receiver within the media. Drafted in the first round back in 2016, Fuller’s main appeal was his 4.3 speed and prowess as a deep threat who could stretch the field. Pairing him with Hopkins seemed like a no-brainer.

There has been a fair share of highlights for Fuller. However, durability has hindered his progress as he’s missed 15 games over the past two seasons. Plus, he’s been inconsistent overall on a week-to-week basis. Still, he brings a rare skill set and is one of the best pure vertical threats in the league.

With the emergence of Coutee, Fuller’s spot on the depth chart isn’t as comfortable as it once was. Staying healthy is obviously the top priority. However, Fuller must prove he can be a consistent factor in the offense. Although, opposing defenses always have to keep his speed in check.

Having already exercised his fifth-year option, the Texans have committed at least the next two years to Fuller. Houston’s receiving corps is on the brink of something special with the exposure of Coutee. If Fuller can prove stability and take the next leap in his development, that will elevate Houston’s group among tops in the league.

Lost in the Watson hype when we look back on the 2017 NFL Draft, many forget Zach Cunningham was selected with their very next draft choice. Starting 27 games in his first two seasons, Cunningham returns as the team’s leading tackler. The former Vanderbilt Commodore has been an integral piece in Houston’s front seven since day one.

Drafted out of Vandy, Cunningham joined fellow SEC linebacker Benardrick McKinney on the inside of Houston’s LB corps. The two make up one of the best young, linebacking duos in the NFL. Coming out, I even compared Cunningham to his eventual teammate.

Like McKinney, Cunningham is also a stout run defender. He excels working downhill and closing on the football. His best trait is his ability to weave through traffic and fit through tight spaces en route to the ball carrier. While Cunningham isn’t a remarkable athlete, he counteracts that with size, length, and range.

A tackling machine in the SEC, Cunningham has been every bit of that at the next level. After leading the team with 107 tackles in 2018, he should produce a routine 100 tackles per year. While he won’t be a perennial Pro Bowler, Cunningham will continue to rack up productive seasons and remain a mainstay in the middle of Houston’s defense.

Brandon Dunn eats up two blocker and Zach Cunningham stuns the back in the hole. This is what you want from an ILB. Mathieu is right there too with his run fill. #Texans pic.twitter.com/ch4pEopmSy

The crown jewel of the Brian Gaine era. Justin Reid was prompt in putting the NFL on notice of his talent. Without a first or second-round selection in the 2018 NFL Draft, Reid was Houston’s first selection towards the top of the third round. While they had to be patient before walking up to the podium, the Texans made the most of it.

With Mathieu gone and a bunch of new faces occupying the defensive backfield, Reid inherits a leadership role. He’s proven to be the alpha male on defense. With talent, leadership skills and a competitive edge, Reid is the exact player teams want patrolling the backend of their defense as he fits that hybrid mold.

With his impressive showings as a rookie, Reid is just scratching the surface of what he could become. The Texans have a budding star in the former Stanford standout. Reid will be the staple of Houston’s secondary for the long haul. It’s only a matter of time before he finds himself playing in Pro Bowls.

This was clearly a no-brainer. Not only is Deshaun Watson the most important player on the team, but he’s also one of the best building blocks in the NFL. The Texans have been the subject of criticism throughout the offseason. At least they can sleep a little easier at night knowing they have their franchise quarterback for the next decade.

We all remember the gutsy trade up in the 2017 NFL Draft where the Texans snagged Watson 12th overall. That roll of the dice proved to more than worth the gamble. After suffering from mediocre QB play since around the turn of the decade, Watson measured up to the high expectations and then some.

It didn’t take long for Watson to take the league by storm. He finished his shortened rookie year averaging four TD passes in his final four weeks. This before suffering a season-ending knee injury. He followed that up by eclipsing 4,000 passing yards and placing inside the top 10 in completion percentage (68.3%) this past season.

After winning a National Championship at Clemson, Watson has transferred that winning mentality to the next level. Despite poor velocity numbers at the 2017 NFL Combine, he sports prominent arm strength evidenced by numerous hookups with Hopkins. Watson’s accuracy has continued to take strides since his college days. Most importantly, he brings the “it” factor under center. If Watson can keep on this development track and round out the corners, there’s no reason he won’t be a top 10 QB for years to come.

Jonathan Valencia is a writer for PFN covering the Houston Texans and Pac 12 NFL Draft. You can find him on Twitter @JonValenciaBF.