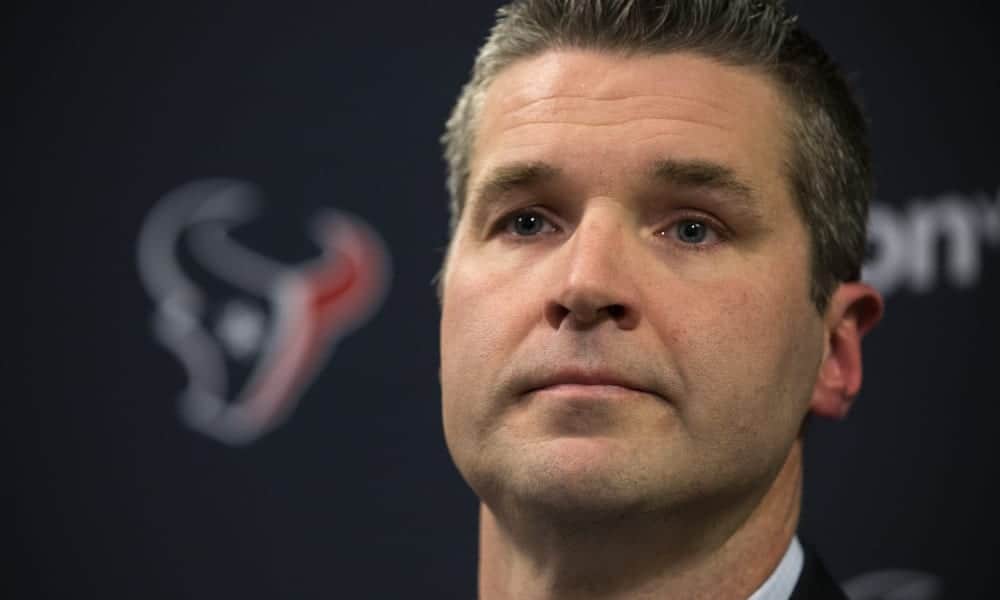 Photo Credit: USA Today
What's in this article? Click to show
Why the Houston Texans fired Gaine
What this means for Bill O’Brien
Possible GM replacements

In a stunning move on Friday afternoon, the Houston Texans fired general manager Brian Gaine. Not the start to the weekend he had hoped for, but a move that was probably inevitable. Although, the timing is vastly suspect.

Not even year and a half into a five-year contract, Gaine finds himself looking for a new job. Chris Olsen, Senior Vice President of Football Administration, will take over as interim GM. Olsen’s expertise came on the financial side as he helped Gaine manage the cap and negotiate player contracts.

I’ve been digging around on Brian Gaine’s firing and there won’t be any crazy stories coming out. Their press release was pretty accurate from what I’ve been able to find out. Rick Smith isn’t coming back. Let’s see if the Pats allow their guys permission to interview this time

Why the Houston Texans fired Gaine

Fresh off an 11-5 season and an AFC South division title, it looked like Gaine built some job security. Without a pick until the third-round of his inaugural draft class of 2018, Gaine brought in a healthy cast of contributors. This included a gem in third-round pick Justin Reid, who emerged as the leader of the secondary. Solid rookie contributors Keke Coutee and Jordan Thomas were also part of that haul.

Entering the offseason, expectations were high for Gaine to make improvements to the roster and maximize their Super Bowl window. With DeShaun Watson still on his rookie deal, the time was now to strike. Not to mention, Gaine had among the most cap room of any team at his disposal.

The big splash was signing Bradley Roby, albeit to a one year deal. Matt Kalil was his best attempt at patching together an abysmal offensive line, and he may not even secure a starting job. Tashaun Gipson was the only player signed to a multi-year deal this offseason as Gaine watched Kareem Jackson, Tyrann Mathieu, and Kevin Johnson leave in free agency.

After an extremely disappointing free agency period, Gaine needed to redeem himself with a dynamite draft class. Although, it probably made an impact much sooner than he had anticipated. Many are pointing towards the mind-boggling draft class as the catalyst that ultimately fueled Gaine’s. I corroborated this theory in my Houston Texans draft grades piece.

Allowing the Philadelphia Eagles to outmaneuver and leapfrog them to pick 22 for Andre Dillard was a major drop of the ball.  A subsequent reach for Tytus Howard looked like the ultimate panic move. From there it didn’t get much better. On top of that, it seems ownership became frustrated with the misdealing of Jadeveon Clowney‘s contract situation.

It’s not surprising that Gaine ultimately got fired, but the timing is strange. It’s extremely rare for a general manager to get the hook at this point in the process leading up to the season. Although, I can admire the Houston for recognizing a problem and being proactive in dealing with it. Now we sit back and wait to see who becomes the fourth general manager of the Houston Texans.

On #Texans firing Brian Gaine, remember Gettleman getting fired by #Panthers partially due to extensions not getting done. Not only did Gaine make zero progress extending Clowney, he shopped him to the #Chiefs in April. Overall, this pivotal offseason in Houston was pretty quiet.

What this means for Bill O’Brien

With the firing of Gaine, many indicate that displays clear power within the organization for head coach Bill O’Brien. While I’d agree with that, I don’t necessarily believe that means his job is safe. The firing of Gaine could be a sign of things to come.

During his tenure in Houston, O’Brien has led the Texans to four winning seasons and a couple of playoff appearances. However, he has just one playoff win to his credit. This came against a Connor Cook-led Oakland Raiders in 2016. Last year’s playoff appearance saw him get shellacked by a better prepared Colts team. Time and time again O’Brien has proved unable to win the big games.

On paper, the Texans don’t look like a playoff team. The argument is there that they’re the worst team in the AFC South, especially after what has transpired over the past few months. We saw all three other AFC South teams improve drastically through free agency and the draft. All while the Texans sat there and made questionable decisions.

In what could be a season of regression and disappointment for Houston, it could come at O’Brien’s expense. You can’t waste the prime years of Deshaun Watson with mediocrity. Based on what happens this season, it’s possible we see a major shakeup next January.

Considering Nick Caserio was Texans’ first choice as GM the last time and he and Bill O’Brien are good friends, I’m sure the first call will be to him to replace Brian Gaine.

With such strange timing to the Gaine firing, there isn’t an excess of candidates to succeed Gaine. We saw Joe Douglas accept the Jets GM gig just moments after Gaine was fired. I wouldn’t be surprised if we see Olsen hold the interim GM tag throughout the season. The Texans should give themselves time and the course of a season before making a franchise-altering decision.

Instrumental to the Brian Gaine hiring, Bill O’Brien is expected to have a say in who is brought in to be the successor. The early favorite seems to be Nick Cesario, whom the Texans tried to interview for their GM vacancy back in 2018 when they hired Gaine. O’Brien has previous work experience with Cesario back from his days in New England. The interest is there and O’Brien will pull hard for him.

The first candidate Houston interviewed was former Cleveland Browns general manager Ray Farmer. Farmer’s tenure in Cleveland was brief, much like Gaine’s. Early rumblings cite this interview is purely to comply with the Rooney Rule early on in their search. Farmer doesn’t appear to be a serious candidate for the job and it would be shocking if he’s hired.

Ultimately I feel it’d be best for Houston to wait it out and just ride the rigors of a season with an interim GM. Let the season transpire, see where the team finishes and go from there. Making a thoughtful, sound decision is the most important thing a team can do and the Texans don’t want to be impulsive.