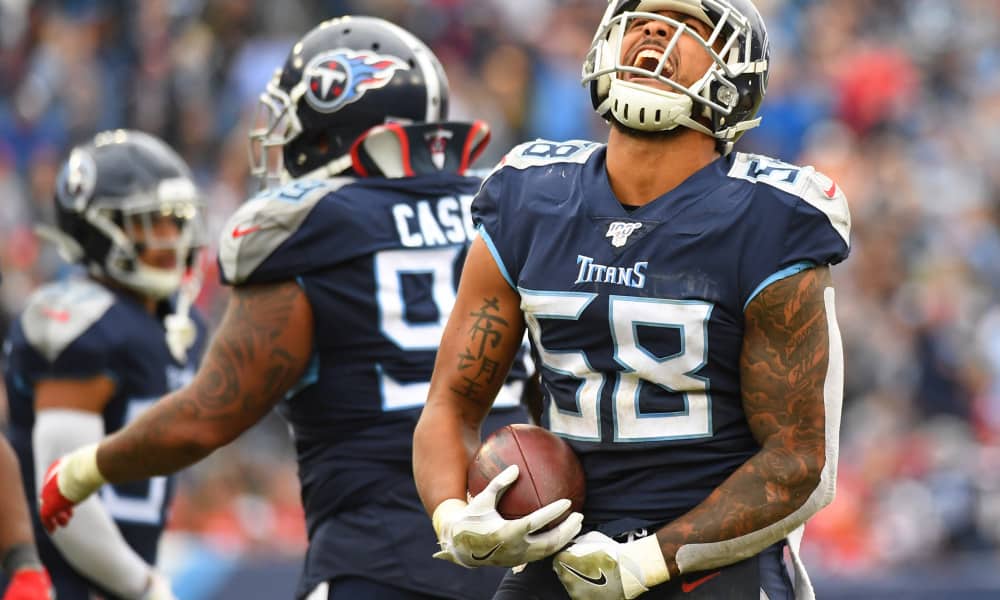 It’s still head tilting to hearken back to the 2018 NFL draft. Harold Landry, an EDGE prospect with all the explosion and bend in the world was still available when the Titans second-round pick rolled around, a team needing a boost in pass rush. Only Marcus Davenport and Bradley Chubb were drafted as primary ingredients for their teams’ pass rush before Landry fell into the Titans’ hands.

Just five picks later, the Kansas City Chiefs drafted Breeland Speaks. Landry would have been a sure-fire first-round pick had he declared after his junior season, but he went back to school and proceeded to sustain an ankle injury that he worked through, to the detriment of his game. Because a Harold Landry pass rush is predicated on burst and bend, and a bum ankle significantly hurts that ability.

That is 16 of the 17 sacks in his young career so far. There’s a sack against Green Bay but it didn’t have the end zone view and, well, continuity is important. Can anybody catch any trends throughout these videos?

Speed and bend are his calling card

That ankle injury from his final season at Boston College has not lingered. This young many can really work the outside shoulder of an offensive tackle. His first step is up there with the best of the position, and he’s able to flatten out and create tight rush angles up the arc. He supplements his burst by reducing the surface area for tackles when he’s able to win the arc, and they often aren’t able to land strikes with any consistency.

Watch in particular his sacks against the Dallas Cowboys and Philadelphia Eagles. Even though La’el Collins didn’t show his true potential until 2019, he’s a talented offensive tackle. Although he’s over-set and the chip from Ezekiel Elliott brings Landry inside, his ability to drive off his left foot and accelerate through proves his juice in a straight line.

Against Lane Johnson, who should be unanimously considered an outstanding right tackle, Landry’s superior athleticism from the position allows him to dip that shoulder and explode through contact, and in turn through quarterback Carson Wentz.

His hustle allows for cleanup sacks

That should be lesson number two from the montage. Take the first sack against the Indianapolis Colts, for example. He’s pushed up the arc and Jacoby Brissett escapes out left, but he keeps his motor hot and gets a nice little cleanup sack for a yard or so.

And this is not a young man put on the field as a pass rush specialist for 30 snaps a contest. No, Landry played a whopping 85.84% of the snaps on defense in 2019, which landed him fourth on the Titans roster and ahead of off ball linebacker Rashaan Evans. He never stops working, and that should be recognized. However, it’s tough to look at what his game is predicated upon and not imagine what he could be if he did play less snaps and was fresh on obvious passing downs.

Multiple times in the video above, and throughout the course of games where he won pass rush reps but wasn’t rewarded with a sack, he showed his hand fighting chops as he captured the arc on the way to the quarterback. It’s not always successful, which we’ll touch on later, but when he’s patient with his strike and uses his twitch to work reactively against offensive tackles, he can really get overzealous tackles up over their skis and onto the ground.

Landry is a hard worker. So, in year three we should expect an improved technician attacking tackles. Demarcus Lawrence and Harold Landry are different types of pass rushers, but the Euro-step Lawrence uses to set up tackles to overset the perception of an inside counter would be deadly in someone with the burst to attack the outside shoulder as Landry does.

Having the ability to, or at least occasionally acting as if the inside move is a legitimate threat, would be enough to free Landry on speed rushes from time to time. Also, mixing up his tempo and starting angle of attack would help as well. Jacksonville Jaguars Yannick Ngakoue is someone who comes to mind not only as a technically-proficient edge rusher, but one that Landry could mold himself after.

Priorities for the Jaguars and their roster in the off-season:
1. Re-sign Yannick Ngakoue
2. Everything else pic.twitter.com/K4ZWJpjoNU

Ngakoue does a great job of changing up his landmarks of the snap, which forces tackles to stay on their toes and not simply overset the arc and catch the rusher in their jaws, which is something that tends to happen to Landry. Part of the issue is simply anatomical. He’s not particularly big or strong, which doesn’t allow for strong counters with his hands when tackles are able to get inside his breast plate. This means he has to keep blockers off of him entirely, which is easier said than done.

This could also be a counter candidate. Although Landry just misses out on the 33-inch arm length mark, whatever you may think of that, his overall athletic profile should bode well for a possible candidate here. All of that burst off the line and ability to change direction is where he could generate power, even if he doesn’t naturally possess the mass and strength to generate it as bigger rushers do.

If Landry were to arc angle off the line and plant hard on that right foot and extend the left into the chest of blockers I have a hard time believing, with all the effort they must use to beat him to the spot on speed rushes, that he couldn’t catch them by surprise a few times a game to collapse the pocket.

Landry had nine sacks in 2019, and outside of a nice interior rush against Atlanta (where he also won on the outside shoulder) he primarily won off natural athletic ability and hustle. All Landry has to do going forward to take his pass rush to the next level is develop ONE passable counter.

And if he ever becomes a true technician, there aren’t many tackles in the league that can keep up with the kid.