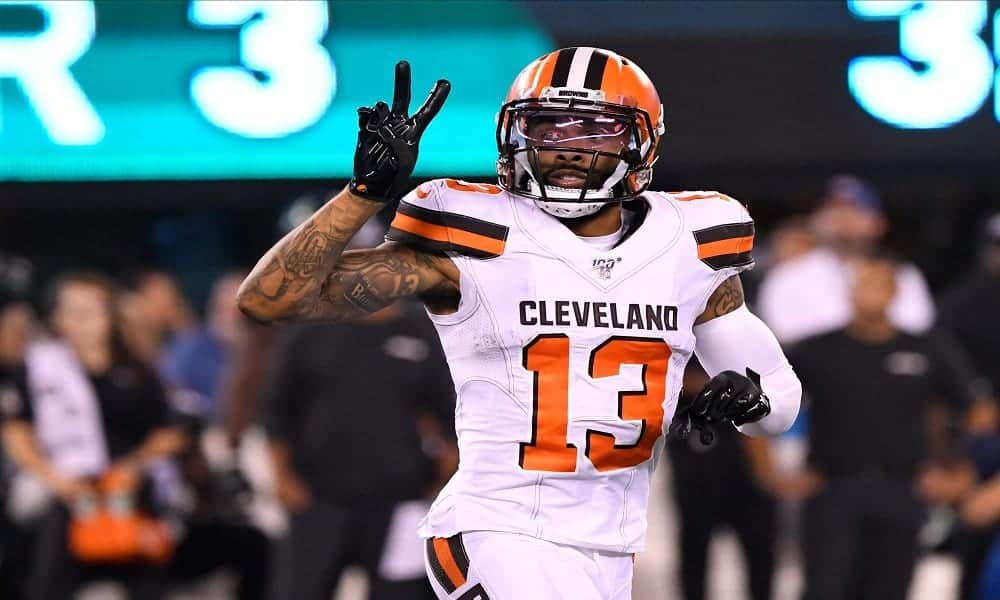 Photo Credit: USA Today
What's in this article? Click to show
Cleveland Browns Defense stymied the Jets
I can see for Myles
The Cleveland Browns offense still looks out of sync
Beckham shines in New York again
Coming up next

The Browns entered the season with plenty of hype but were blown out by the Tennessee Titans in Week 1. They changed the season’s narrative by winning a game that they were supposed to win against the injury-riddled New York Jets team.

How did the Cleveland Browns beat the New York Jets? Which players shined on Monday Night Football? Should Browns fans still be concerned? Find out the answers to those questions and a whole lot more as we dive into Four Downs with the Cleveland Browns: Takeaways from Week 2.

The Cleveland Browns manhandled the New York Jets, and they should have.

The New York Jets lost quarterback Trevor Siemian to an ankle injury in the second quarter, and Luke Falk, who was promoted from the practice squad earlier in the day was forced to play the rest of the game. Siemian was starting in place of Sam Darnold, who’s sidelined for at least a few weeks while recovering from mononucleosis.

At halftime, the Jets’ offense had produced only 45 total yards, and the passing game was going the wrong way at -13 yards. By the end of the game, the Jets put together a few decent drives thanks to Le’Veon Bell and finished with 262 total yards.

However, the Jets finished with more punts (seven) than passing first downs (six) in the Monday Night matchup.

Bell was a one-man show despite this game being a lopsided matchup from the start. Bell caught ten passes for 61 yards while rushing for another 68 on 21 attempts.

A member of the Browns defense also produced a one-man show on Monday Night Football, the player that the Pro Football Network staff predicted will win the Defensive Player of the Year: defensive end Myles Garrett.

I can see for Myles

Myles Garrett leads the NFL in sacks through 2 weeks of football (5). pic.twitter.com/0AO7BQ5AiO

Myles Garrett was unstoppable and the best defensive player on the field Monday Night. He produced a monster game, and his strength and speed overwhelmed Jets left tackle Kevin Beachum.

Garrett produced five tackles, five quarterback hits, and three sacks. His hit on quarterback Trevor Siemian, suffering a gruesome ankle injury whose leg bent backward as he hit the ground forced Luke Falk to replace Siemian for the rest of the game. That ended any hope for the Jets in this contest.

The former Aggie’s five sacks through two games are also the most of any player in the NFL since Clay Matthews in 2012, per ESPN Stats & Info.

However, we have to talk about the negative for Myles Garrett. He was called for three penalties. He was flagged twice for roughing the passer and an offsides call. The roughing penalties were boneheaded moves. Garrett needs to learn to tame down his emotions.

The Cleveland Browns offense still looks out of sync

The final results are what is expected, but overall the offense looked out of sync.

A portion can be attributed to Jets defensive coordinator Gregg Williams knowing how to attack his former quarterback. However, the Jets were without their best defensive players in linebacker C.J. Mosley, and defensive end Quinnen Williams. Outside linebacker Jordan Jenkins left with an injury during the first half. Finally, the Jets inexplicably decided to bench cornerback Trumaine Johnson in this prime-time matchup.

The Browns had everything in their favor and were still only being able to convert just 4 of 13 third downs.

At least this week, we can’t look at the penalties as an excuse for their lack of offense. After committing 18 penalties for 182 yards last week in their humiliating defeat to the Titans, the Browns had only nine penalties for 85  yards. Two of those were an intentional delay of games flags on fourth down when the Browns tried to draw the Jets offsides.

Quarterback Baker Mayfield didn’t play great, but then again he didn’t have to in this game. He finished the game having completed 19-of-35 passes for 325 yards and a touchdown with a dreadful interception in the fourth quarter.

The offense is lacking the creativity that was showcased with the Browns being so explosive at the end of last season. Is the Browns offense suffering growing pains with their new offensive coordinator Todd Monken?

Mayfield seems to be holding on to the ball too long. He is attempting to get the big play with each play consisting of long-developing routes. He continues to try to keep the play alive until the very last second like we are playing backyard football. It makes the offense look ragged, and they need more time on the field together.

Browns tight end David Njoku left Monday’s game in the first quarter with a concussion. The injury puts some doubt on if Njoku will be available next week and adds some negativity to the Browns offensive prowess.

There were two bright spots on the Browns offense. Running back Nick Chubb looked impressive on his 19-yard touchdown run. He played well and ran tough on his way to 62 rushing yards on 18 carries to go along with four receptions for 36 receiving yards. I am not sure why Chubb didn’t receive more carries in this game because he was tearing up the defense, but regardless Chubb was fantastic and should have an outstanding season.

The other bright spot made his return to New York under the bright lights. What else do you think was going to happen when Odell Beckham Jr. returns to the Big Apple?

21.70 MPH 🔥@OBJ's 89-yard TD was the fastest speed by a ball carrier on a scoring play this season! (via @NextGenStats) pic.twitter.com/4IgjawovCz

Odell Beckham showed the world why the Cleveland Browns made the massive trade with the New York Giants to acquire the three-time Pro Bowl wide receiver.

The night started with a classic OBJ one-handed grab — he’s one of the handfuls of players in the league that can do this. And he did it in the same stadium has his most famous catch. This fantastic catch set up the Browns’ first score, a 23-yard field goal. It was reminiscent of Beckham’s highlight-reel, one-handed reception for the Giants on Sunday Night Football as a rookie in 2014.

Another classic Beckham play happened in the second half. He took a short slant after  Baker Mayfield ran play action. Mayfield hit Beckham in stride, and from there it was a footrace to an 89-yard touchdown, the longest of Beckham’s career.

That enormous play sealed the Browns victory and energized a Browns team that looked like it was going through the motions on its way to a comfortable win.

“That’s how explosive we can be,” Mayfield said. “That’s the type of thing, like I’m saying with the incompletions, something like that was a long throw that we really had to scheme something up to protect it and hold on to the ball and throw it down the field. Just get the ball into his hands. Just get it into the playmakers hands. He’s a big difference maker when it comes down to it.”

Beckham shined in his return to New York, finishing with six receptions for 161 yards and that lone touchdown.

This play was gratifying for Beckham after his statements about Jets defensive coordinator and former Browns interim coach Gregg Williams last week. He said the coach, while he was with the Browns, instructed players to hurt Beckham in a preseason matchup in 2017. Williams denied Beckham’s accusation and jokingly responded to reporters: “Odell who?”

I bet Williams recognized Odell when he was running through the Jets secondary on his way to his 89-yard touchdown run.

The Cleveland Browns did what they were supposed to do on Monday Night Football. They beat an undermanned New York Jets team.

The Browns are still a work in progress in trying to incorporate Beckham into their offense with a new play-caller in Monken. Another aspect that must be mentioned is a new offensive line. Mayfield had time to throw, but as mentioned, he did hold onto the ball way too long. That will need to change immediately.

The Cleveland Browns will have to be better offensively in Week 3 when they visit the NFC Champions Los Angeles Rams on Sunday Night Football.

The Sunday Night Matchup will be a humongous litmus test for the Browns. The Rams offense is top-notch with innovative play-caller in head coach Sean McVay. They have an elite wide receiver group led by Cooper Kupp, Robert Woods, and Brandin Cooks.

The Rams defense is driven by the best defensive player in the league in defensive tackle Aaron Donald. The offensive play-calling and execution of short throws will be essential to a victory Sunday night. I can’t wait to see what game plan head coach Freddie Kitchens and offensive coordinator Todd Monken come up with for this brilliant Sunday Night showdown.

Dennis Sosic is a writer for PFN covering the Cleveland Browns. He is also a co-host of the Fantasy Fixers Podcast for PFN’s Podcast Network. You can follow him @CALL_ME_SOS on Twitter.