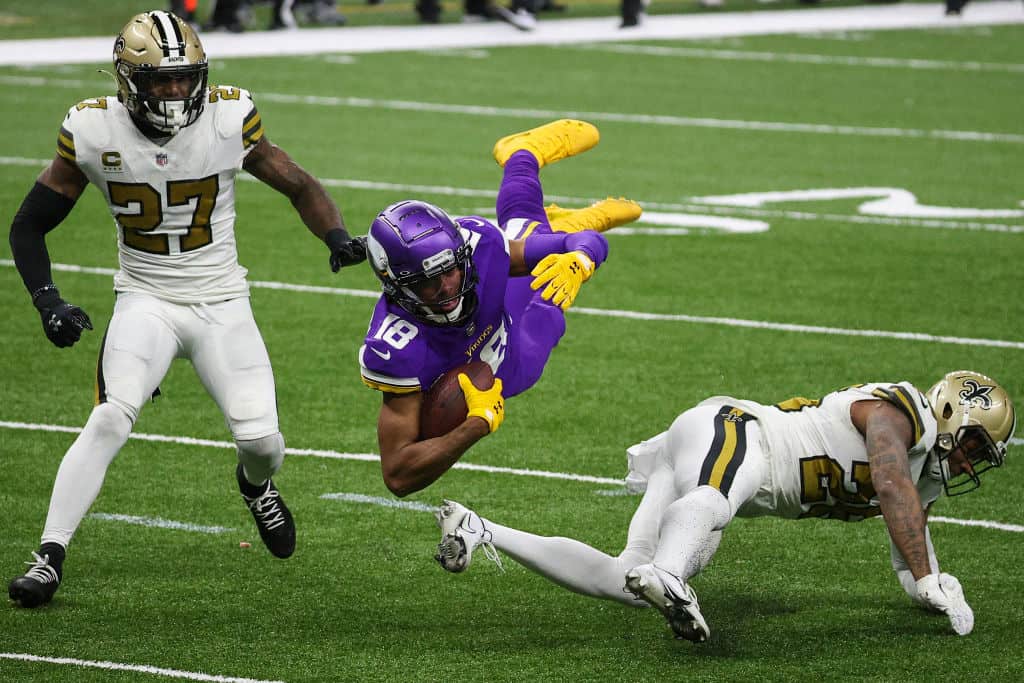 NEW ORLEANS, LOUISIANA - DECEMBER 25: Justin Jefferson #18 of the Minnesota Vikings is flipped by P.J. Williams #26 of the New Orleans Saints during the second quarter at Mercedes-Benz Superdome on December 25, 2020 in New Orleans, Louisiana. (Photo by Chris Graythen/Getty Images)
What's in this article? Click to show
What to keep in mind heading into Week 17 and searching for the best fantasy football wide receiver
Justin Jefferson leads the top 5 in fantasy WR rankings
Adam Thielen rounds out the Tier 1 fantasy WR rankings
Want more fantasy football analysis and news?

Although most fantasy football championships wrapped up in Week 16, a small number of leagues will crown a champion in Week 17. If you’re sitting down to set your Week 17 lineup and are wondering if Justin Jefferson will be one of the top fantasy wide receivers in Week 17, we have just the thing for you. Our Week 17 fantasy WR rankings will help you separate the must starts and sleepers from those costly WR busts.

Whether that be a team that has already secured a playoff place, like the Kansas City Chiefs, or a team with nothing to play for, like the Jacksonville Jaguars, players on those teams are volatile assets for your fantasy team. A number of teams will ultimately rest their star players. In addition to that, some players that are banged up are less likely to fight through that twinge in Week 17 than they would in the heart of October. Especially, if they have one eye on free agency.

The injury report will play an important role alongside these Week 17 fantasy WR rankings. A number of players are already ruled out for this week, but some will be game-time decisions. At the time of writing, a number of the top wide receivers in our Week 17 fantasy WR rankings were listed as questionable. This list includes Tyreek Hill, DeAndre Hopkins, and Allen Robinson.

Not many people had Justin Jefferson tabbed as the top rookie wide receiver in the NFL this season. However, the former LSU wide receiver has been in phenomenal form for the Minnesota Vikings. Jefferson has the eighth-most fantasy points this season as a result of 1,267 receiving yards and seven touchdowns. This, despite battling teammate Adam Thielen for target share and red zone opportunities.

Jefferson has an extremely favorable matchup against the Detroit Lions to end the season. The Lions have allowed the fourth-most fantasy points to the wide receiver position in 2020. Although Jefferson managed just 9.4 points against them in Week 9, he has scored double-digit points in three of his last four games.

Tennessee Titans wide receiver A.J. Brown is the WR2 in our Week 17 fantasy WR rankings as a result of his matchup against the Houston Texans. Brown scored 22.8 fantasy points in PPR leagues against the Texans in Week 6. He secured five receptions for 58 yards and two crucial touchdowns. The Houston defense has allowed the eighth-most points to the wide receiver position, allowing 25.8 points per game.

Mike Evans has a prime matchup to end the season

Week 16 was extremely kind to Mike Evans’ owners. He carved up the Detroit Lions defense to the tune of 40.1 points in PPR leagues. Although the Tampa Bay Buccaneers have secured a place in the playoffs, they should still put up a comfortable victory over their divisional rival Atlanta Falcons. The Falcons defense has allowed 28.4 fantasy points per game, the second-most in the 2020 NFL season.

Although Davante Adams faces a strong Chicago Bears defense, he earns his place in our Week 17 fantasy WR rankings as one of the most consistent wide receivers in the NFL. Adams ranks second among wide receivers in Phillip Caldwell’s Fantasy Football Consistency Score with a score of 8.02. He leads the NFL in touchdowns, total fantasy points, and fantasy points per game.

Adams sits just ahead of Tyreek Hill for total fantasy points. However, Hill’s outlook this week is murky with quarterback Patrick Mahomes set to miss today’s game against the Los Angeles Chargers.

Two of the worst defenses in the NFL go to battle in Week 17. Don’t just take my word for it. Minnesota Vikings head coach Mike Zimmer was scathing in his criticism of his own unit after the Week 16 defeat to the New Orleans Saints. The Lions defense didn’t do much better in trying to contain the Buccaneers.

Despite Justin Jefferson sitting atop our Week 17 fantasy WR rankings, there’s room for another Vikings wide receiver in here too. Adam Thielen has the eighth-most fantasy points per game as a result of 14 touchdowns this season.

Although Marvin Jones Jr. scored a modest 13.3 points against Minnesota last time out, he is a receiver on form. Without Kenny Golladay, he has become the main focus of the Lions offense. As a result, Jones Jr. has two 20+ fantasy games in the last three weeks. That includes against a Chicago Bears defense that has been resilient against the position this season.

Ridley, Diggs, and Metcalf finish the season in the top 10 of our fantasy WR rankings

Calvin Ridley may not receive the same acclaim as some of the top fantasy football wide receivers, but he has been a valuable weapon for Matt Ryan in the Atlanta Falcons offense. Ridley has scored 19.4 fantasy points per game, the fourth-most in the league. With injuries and age decline creeping in for Julio Jones, Ridley will be the go-to Falcons wide receiver for years to come.

Stefon Diggs has consistently been one of the top fantasy football wide receivers this season. Although he faces a tough Miami Dolphins defense in the regular season finale, he still features in the top 10 of our Week 17 fantasy WR rankings. However, uncertainty over how much playing time the Buffalo Bills starting offense plays drops him a little further down from where he would normally be found.