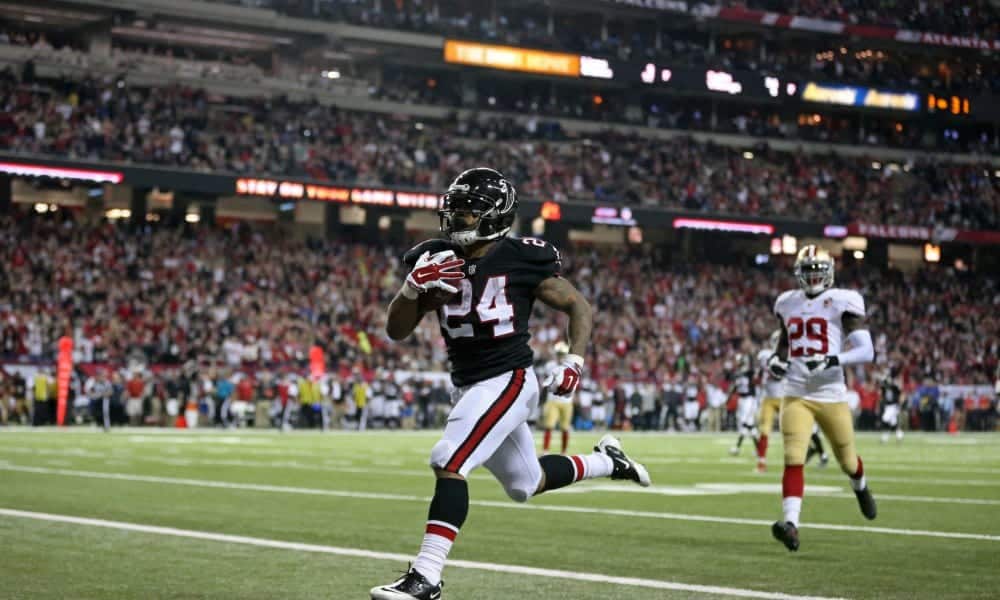 With the recent signing of Cam Newton, Running back Devonta Freeman is arguably the most talented offensive player still on the market as we head towards the middle of July still looking for a landing spot. While 2019 was a struggle for Freeman, as he finished 30th at the position when it came to Pro Football Network’s Offensive Share Metric, he still made enough of an impact, carrying the ball 184 times for 656 yards and two touchdowns to go with 59 receptions for 410 yards and four scores.

Freeman departed from the Atlanta Falcons earlier this offseason as the team looked to free up some additional cap space, and has been adamant about receiving a lucrative deal with another team, going so far as to say he’d sit out the 2020 season ‘”if his number isn’t met.”

Freeman may have to get a little more realistic about his expectations if he is to take the field this year. However, this talented running back could certainly still be an asset for a number of teams. Let’s take a look at three such teams that Freeman could immediately improve.

There’s been a lot of buzz about this one lately. While the Giants are set at the top of the depth chart with form Rookie of the Year Saquon Barkley, they could still make themselves that much stronger by adding Freeman. They’ve got the cap space to do it, with $16 million to work with. Bleacher Report’s Kristopher Knox believes this would be an ideal move for the team, given the possibility of injury for Barkley and the fact that no rusher should have to handle the full load himself.

“Though Barkley is a special back when at 100 percent, he missed three games due to injury last season and has already seen 621 touches in his two-year career The risk of him being overworked is real, and if the Giants are going to be at all competitive in 2020, they’ll need to avoid that.”

The Chargers could use a statement running back like Freeman after the departure of Melvin Gordon to the Denver Broncos earlier this offseason. Austin Ekeler has functioned well as a pass-catcher, but as is demonstrated by his low OSM grade the Los Angeles offense could benefit from having another back to allow them to rely more on the run game as new quarterback Tyrod Taylor gets settled in, assuming he’s the team’s starting quarterback this season.

They invested in Joshua Kelley in the fourth-round of the 2020 NFL Draft, but he profiles to be more of a work in progress. Had they invested in a back higher in the draft, then the need for Freeman would not be there. However, plenty of question marks remain around the consistency that will be provided by a backfield of Ekeler, Kelley, and Justin Jackson in 2020.

The Bears have David Montgomery, but not much to provide depth behind him. Tarik Cohen is certainly an asset on offense, but he’s a versatile player whose role tends to be in the passing game more frequently and isn’t a traditional three-down running back.

This is a team that needs to add another strong rusher to really solidify their run game, and Freeman could do just that. Mitch Trubisky could be getting his final chance to prove he’s the team’s quarterback of the future this season, and considering how south that could go, it would serve Chicago well to be able to fall back on the ground game.

In this article:devonta freeman, Featured, featured