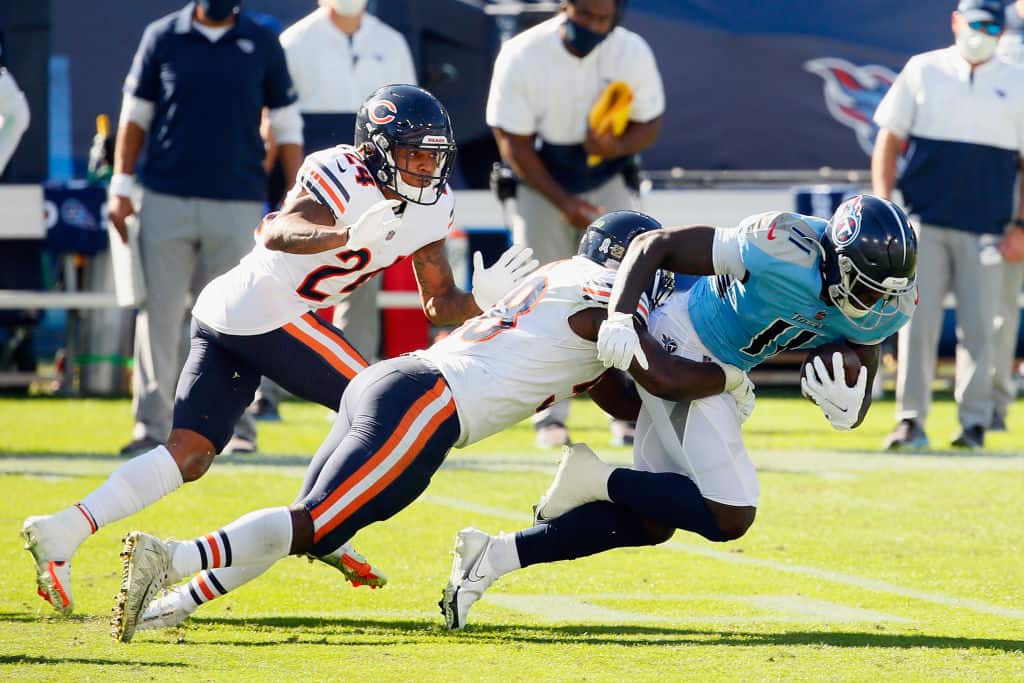 NASHVILLE, TENNESSEE - NOVEMBER 08: A.J. Brown #11 of the Tennessee Titans is tackled during the second quarter against the Chicago Bears at Nissan Stadium on November 08, 2020 in Nashville, Tennessee. (Photo by Frederick Breedon/Getty Images)
What's in this article? Click to show
Fantasy Injury Updates Week 10: Which RBs on the injury report are playing this week?
Fantasy WR Week 10 Injury Updates: Which fantasy WRs are playing this week?
Is Ben Roethlisberger playing in Week 10?
Want more fantasy football analysis and news?

With Sunday’s slate of games approaching quickly, fantasy football GMs will need to stay on top of the most recent Week 10 RB, WR, and QB fantasy injury updates and pay attention to any injury report updates. This includes the likes of AJ Brown, Nick Chubb, Kenny Golladay, Calvin Ridley, and more.

The question marks around a handful of notable players leave fantasy GMs scratching their heads when trying to set their lineups this weekend. Will they play, or do we need to look to the waiver wire to try and find some last-minute replacements?

Fantasy Injury Updates Week 10: Which RBs on the injury report are playing this week?

We start our Week 10 fantasy injury report by taking a look at the latest updates at the running back position. With some big names like Chris Carson, Nick Chubb, and David Montgomery surrounded by question marks, will your RB1s be active on Sunday?

Update November 14th, 2020: Carson (foot) has been ruled out ahead of Sunday’s divisional matchup against the Rams, Curtis Crabtree of Sports Radio 950 KJR Seattle reports.

Update November 12th, 2020: Carson was listed as a non-participant on Thursday’s injury report, Michael-Shawn Dugar of The Athletic reports.

After missing each of the team’s last two games due to injuries, the Seahawks could see the return of RB Chris Carson for this week’s game against the Los Angeles Rams.

Head coach Pete Carroll expressed optimism towards Carson and his progress heading into Week 10 saying, “I had hoped that we would get a look at him last week on Friday, that’s what we had planned to do, it just didn’t work out. So we’ll see as we’re going; it’s encouraging, though.”

Related | Chris Carson Injury Update: Is he playing this week?

Knowing that Chris Carson had a shot at making it last week should give fantasy managers confidence in his availability for Sunday. If Carson cannot make it back, the team will be relying on DeeJay Dallas, Travis Homer, and Alex Collins for another week. Dallas has seen 32 touches for 97 yards and three touchdowns in the last two games. It is worth noting that Carlson Hyde could make his return this week as well.

Update November 14th, 2020: Ian Rapoport reported that Nick Chubb has been activated from the IR and will play Sunday.

Update November 12th, 2020: Chubb was on the practice field Thursday, according to Cleveland.com’s Mary Kay Cabot, so that indicates that he may have a chance to play on Sunday.

All signs point to Nick Chubb returning to the RB1 fantasy status this week as the Browns have designated Chubb to return from injured reserve, the team announced Monday. Mary Kay Cabot of The Plain Dealer reported that Chubb practiced on Monday while wearing a full knee brace as a precautionary move by the team and their medical staff.

Related | Nick Chubb Injury Update: Is he playing this week?

Before his injury, Nick Chubb was near the top of the league’s leaderboard in rushing yards with 335 yards and four touchdowns. His six rushes of 20-plus yards still lead the league.

Update November 14th, 2020: Montgomery (concussion) will not play in Monday’s matchup against the Vikings.

Update November 12th, 2020: Montgomery remains out and has not practiced all week due to a concussion. He was not on the practice field Thursday.

Unfortunately for the Bears and fantasy managers in Week 10, David Montgomery’s injury status is up in the air. Montgomery exited Sunday’s game against the Titans in the fourth quarter and has been placed in concussion protocol, according to James Palmer of the NFL Network. Montgomery will have an extra 24 hours to clear the league’s protocol since the Bears don’t play again until Monday night. Before exiting, David Montgomery was having a typically inefficient day, rushing 14 times for 30 yards and catching three passes for 12 yards.

Update: Brown was ultimately healthy and played during the Titans’ loss on Thursday Night Football to the Indianapolis Colts. Even though he was active, he only had one reception for 21 yards.

Currently listed as “week-to-week” by the team, Lions’ WR Kenny Golladay’s status is up in the air after missing Week 9 due to a hip injury. Kenny Golladay suffered this injury in Week 8 against the Colts after seeing four targets but failing to come down with any for the first time in his career.

Until we get more information, it will be hard to make a determination on if Kenny Golladay is playing this week. Though if you read the tea leaves, the team’s acquisition of WR Mohamed Sanu does not bode well for their view on him moving forward. WRs Marvin Jones, Danny Amendola, and Quentiz Cephus will be the team’s main passing threats until Kenny Golladay can come back.

Though we know Calvin Ridley is not playing in Week 10 due to the Falcons having a bye week, we need to pay attention to his status on the injury report moving forward and see what comes out of their practices this week.

Calvin Ridley (foot) didn’t practice all last week and missed their game in Week 9, even though interim-head coach Raheem Morris said the third-year receiver is in a “good spot” to suit up Sunday. Having the extra week off for rest should give Calvin Ridley a good chance to return to fantasy lineups in Week 11.

Is Ben Roethlisberger playing in Week 10?

Update November 14th, 2020: The Pittsburgh Steelers have activated Ben Roethlisberger from the reserve/COVID list and the quarterback will be eligible to play on Sunday.

Update November 12th, 2020: With Roethlisberger not practicing all week because he is a high risk contact, we do not have any news on his knee injury and if he will be playing this week.

Unfortunately, Pittsburgh announced that TE Vance McDonald has tested positive and has been placed on the reserve list. After quickly following the protocol, it was determined that QB Ben Roethlisberger was a “high-risk close contact” and was placed on the list as well, despite testing negative, along with Jerald Hawkins, Jaylen Samuels, and Vince Williams.

As “high risk” contacts, they must isolate for five days after their last contact with McDonald, and they cannot return to the practice facility for at least those five days.

What is interesting in Roethlisberger’s case is that players are allowed to come in for treatment so long as they are testing negative, something the quarterback desperately needs. Roethlisberger injured his knees in the team’s Week 9 victory over the Dallas Cowboys and likely would have had more time off this week than normal due to his injuries.

So long as he continues to test negative and his knees heal properly, Ben Roethlisberger should be able to suit up against the Bengals this week.