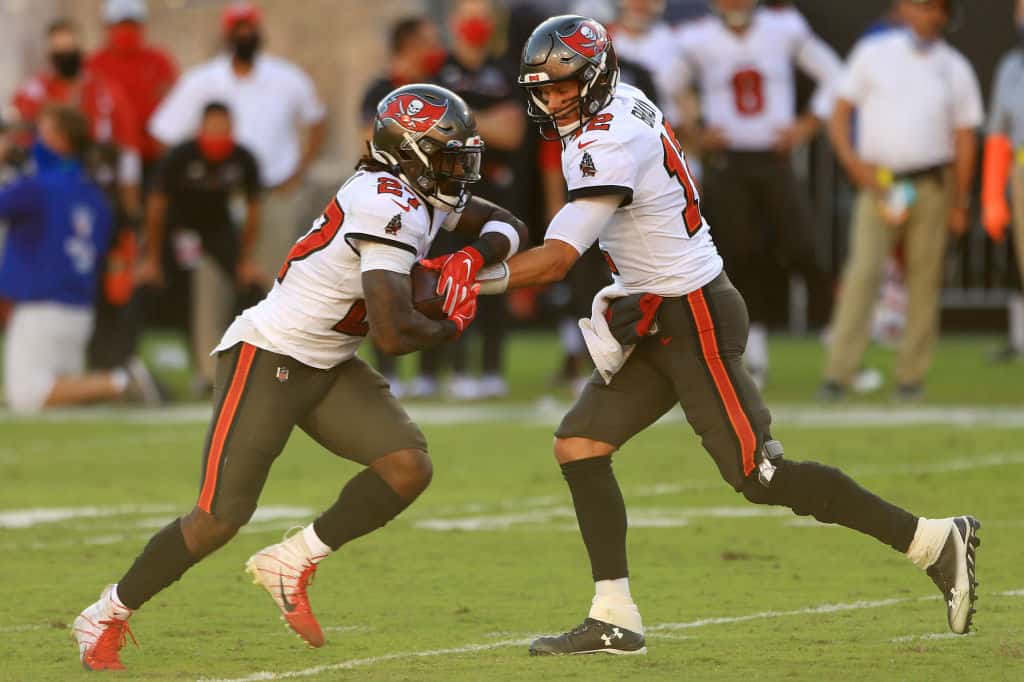 TAMPA, FLORIDA - OCTOBER 18: Ronald Jones #27 of the Tampa Bay Buccaneers takes the hand off from Tom Brady #12 during the second quarter against the Green Bay Packers at Raymond James Stadium on October 18, 2020 in Tampa, Florida. (Photo by Mike Ehrmann/Getty Images)
What's in this article? Click to show
Who should I start in my fantasy football lineup Week 7?
Who should I sit in my fantasy football lineup Week 7?
Want more analysis and news?

We know that many fantasy football managers are in do-or-die mode, facing dilemmas on the best ways to round out your roster and finding the optimal matchups to get an advantage. Considering the scope of injuries around the league, you need to be resourceful and diligent in getting the depth you need to survive any circumstance. Fortunately, I’m here to help you navigate the murky waters of Week 7 with the players on your squad to start and sit as we approach the midway point of the fantasy football season. With a strong slate of games and matchups on display this Sunday, we’ll take a look at which players can help you come out on top this weekend in fantasy football.

Who should I start in my fantasy football lineup Week 7?

Herbert is averaging over 20 points per game, and the Jaguars have allowed signal-callers to post more than 20 points per game — it’s a match made in heaven! Keenan Allen, Herbert’s most targeted pass catcher, was a full participant at Friday’s practice and is no longer listed on the injury report for Sunday’s game.

Any quarterback that faces the Falcons is a juicy matchup, and this is a no brainer. Stafford struggled a tad against a weak Jaguars secondary last week, but I will be playing Stafford in several DFS stacks with Kenny Golladay, TJ Hockenson, and throw in a little D’Andre Swift as well. The “Falcons well” is the gift that keeps on giving.

More quarterbacks with the green light

Jones has taken the lead role with Fournette on the mend. Let’s hope, for scoring sake, that phenomenon continues this week against the Raiders that has allowed eight touchdowns to opposing ball carriers.

Swift has finally arrived, posting over 100 rushing yards and a touchdown against the Jaguars last week. Week 7 presents a juicy matchup against a Falcons defense that is weak against ball carriers in the passing game. Get Swift on your active roster!

I see a positive game script for the Bills running game. I envision the Bills going up early and then counting on their rushing game to finish the bloodbath. This game will be ugly, and Singletary should be able to pick up chunk yardage against a deflated Jets defense.

Dallas is flat out broke, like college kid broke: a broken team with a horrible defense, trying to survive on Ramen noodles alone. McLaurin is the best player on Washington’s offense, and they should have a field day against the Cowboys provided they get at least average quarterback play from Kyle Allen. It’s hard to know if you should start or sit a player on the worst offense in the NFL, but in this scenario in Week 7, you start this young man in your fantasy football lineup, and you do it now!

Don’t be shocked if the Bengals upset the Browns this week, and their wide receiving corps should help quarterback Joe Burrow keep it close. Boyd has developed tremendous chemistry with Burrow, and I expect an extremely productive day on Sunday against the sixth-worst pass defense in the NFL thus far.

Kirk has come on strong in the past three weeks, scoring three touchdowns and making plays for Kyler Murray and company. The Seahawks can put up points in bunches, and the Cardinals may be playing from behind with Murray airing it out in the fourth quarter. Seattle is giving up the most points to opposing receivers — Kirk, among others, should feast on Sunday night.

Tight ends have had their way against the Jaguars this season, scoring in every game. Keenan Allen was dealing with back spasms pre-bye week. Though Allen appears on track to play, Henry will be an even better play in the red zone if Allen is limited in any way.

Who should I sit in my fantasy football lineup Week 7?

The Bears defense has not allowed multiple touchdowns to gunslingers all season and has forced some interceptions. There are better QBs to have active this week.

With Cam Newton back in the fold, this is a real committee, including the quarterback position. Last week versus the Denver Broncos, of the 25 rushing attempts, Harris received the second-most carries — it just happened to be fewer than 25% of the total attempts. Simply not enough volume facing a top-10 rush defense in the 49ers.

Knowing what to do with Bell is a tough Week 7 start or sit dilemma for your fantasy football club: you cannot deny the talent, but Clyde Edwards-Helaire just received 26 carries (which he turned into 161 yards). Andy Reid does not like to pivot away from the hot hand. Between volume concerns and being the first game, Bell may need a tad more time to know what type of floor he will offer. Until then, I am in holding formation.

Last week, Andy Dalton had to throw a whopping 54 times due to game script, and you’d expect Gallup to have more than two catches, but that was the result. He was fourth on the team in targets, and the Cowboys offense will be a work-in-progress as they adjust to being Dak Prescott-less. Unfortunately for Gallup owners, it appears the production may be lean with Dalton under center.

Quarterbacks have the worst completion percentage and second-worst passer rating against the Bears pass defense. On top of giving up the 11th fewest passing yards per game in the NFL, the Bears will likely lean on the run for game planning purposes, as Foles airing it out versus the fourth-ranked Rams pass defense would be Russian roulette. With the clock running more, it’s fewer opportunities for the Rams offense. You may not have the luxury to sit Kupp, but I’d temper expectations.

I don’t want to be cold-hearted, but there are an exuberant amount of tight ends you should not start. I won’t insult your intelligence on this one; you don’t want to have anyone with low volume, including a large proportion of NFL tight ends. This was your TedxTalk for who to start and sit in your Week 7 fantasy football lineup.

Anita Marks is the Chief Fantasy Analyst at Pro Football Network. Marks is also a gambling analyst for ESPN and appears on Daily Wager, which airs from 6-7 PM ET on ESPN 2. Her radio show — Weekend Wager — airs on ESPN New York (98.7) FM every Friday at 10 PM ET. Follow her on Twitter: @AnitaMarks.