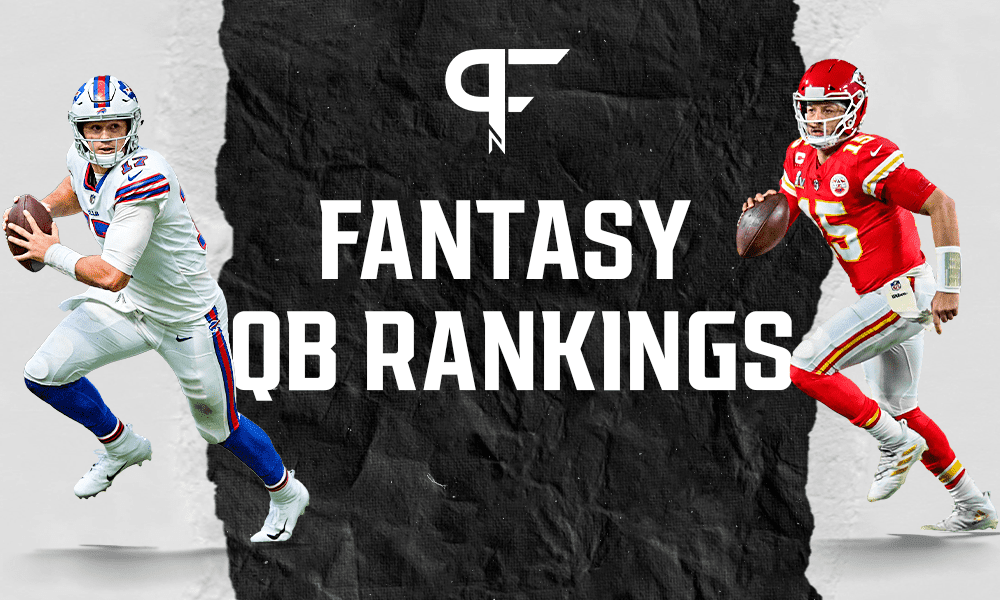 What are PFN’s consensus QB fantasy football rankings for 2021? Which players are in the QB1 range, and who is further down the list?

As we enter into the season for fantasy football drafts, what are Pro Football Network’s consensus QB rankings? Which players do our fantasy analysts see as starters you can rely on this year, and which players should be viewed more as streaming options? Let’s break down the PFN consensus 2021 QB rankings from Senior Fantasy Analyst Eric Moody and Fantasy Analyst Tommy Garrett.

Which 12 quarterbacks should be viewed as QB1’s going into the 2021 season?

Similar to his contract, it wouldn’t be surprising to see Mahomes at the top of QB rankings for the next 10 years. He’s as consistent as they come and at the head of the most high-powered offense in the NFL. Allen broke out in 2020 to finish as the QB1 in all of fantasy football. Several believe he can do it again and rate him above Mahomes as a result.

An argument for the remaining players listed here can go either way. Murray finished last year as the QB2 and is essentially locked in to finish as a top-five QB once again. Going off of last season’s production up until his injury, Prescott has the most upside to leap Mahomes and Allen to finish as the QB1. Jackson was the QB1 in 2019, and so was Wilson for the first half of 2020. Both players have shown the ability to go off in any game, regardless of matchup.

Is Aaron Rodgers retiring? There is speculation that could be the case unless Green Bay finally trades him. The uncertainty surrounding his situation has him at No. 7 in our QB rankings, but expect that to change in some way once this is resolved. Herbert had a fantastic rookie season and was well-deserving of the Offensive Rookie of the Year award.

Hurts showed at the end of the year that he can be a top-10 fantasy QB with his dual-threat ability. Brady is still Brady, and with the top WR corps in the NFL, he is about as safe as it comes in terms of fantasy production. Tannehill was a top-seven QB in 2020 and now gets Julio Jones added to his arsenal. Now in the Rams’ offense under head coach Sean McVay, Stafford’s ceiling is high for 2021 while his floor remains relatively low.

Which QBs in the QB2 range could finish higher with strong outings?

High ceilings for Joe Burrow and Trevor Lawrence in 2021

Prior to his injury in Week 11, Burrow was the QB15 at an average of 18.6 fantasy points per game. He’s expected to return by Week 1, and now he has his LSU teammate, Ja’Marr Chase, added to the fray. If his offensive line can keep him upright, there’s little standing in Burrow’s way of finishing as a QB1 in 2021.

All eyes will be on the NFL Draft’s No. 1 overall pick, Trevor Lawrence. Questions surround the Jaguars’ offense and the coaching staff, but Lawrence is a one-of-a-kind prospect. In the future, he should be solidified higher in our fantasy QB rankings and remain there for years to come.

Ceiling and upside are not words to describe Kirk Cousins, but he’s about as safe they come and a good QB2 to have on your roster. Ryan has finished outside QB1 status just once since 2016. However, the departure of Julio Jones and the addition of Arthur Smith as head coach leave question marks surrounding the 36-year-old veteran.

Unlike in 2020, Tua has weapons going into the 2021 season. Former offensive coordinator Chan Gailey did not provide many opportunities for Tua as a rookie. But with a better understanding of the playbook — as well as Will Fuller and Jaylen Waddle added to the mix — Tua could move up significantly in these QB rankings. His former teammate Ryan Fitzpatrick is now in Washington, and he also has many options to work with. If we see more Fitzmagic rather than Fitztragic, he could be the top streaming option of 2021.

The Browns are contenders going into 2021. However, much of that is dependent on their defense and the run game. Mayfield still has some work to prove his worth as the No. 1 pick in 2018. If he does, Cleveland could certainly challenge Kansas City as the top team in the AFC. Jones is getting one last chance in the Big Apple. And through free agency and the NFL Draft, the Giants are doing all they can to help him.

Like Mayfield, Wentz is the starter on an AFC contender. But like Jones, his chances are drying up. Wentz could catapult to the top 10 with a breakout performance, but he’ll continue to be viewed as a low-end QB2 until proven otherwise. Carr finished just outside QB1 territory in 2020. With the addition of John Brown to go alongside Darren Waller and Henry Ruggs, Carr could again finish in that range.

No quarterback in this range has a higher upside than Trey Lance. Taken third overall, the 49ers certainly believe he can lead them back to the Super Bowl. But when will he start? Once we have the answer to that and see him play at the NFL level, then we can properly assess Lance’s placement in our fantasy QB rankings.

Roethlisberger is entering his final season. Age showed in his performance in 2020, but drops from Pittsburgh’s pass catchers didn’t help matters. While the Steelers still have a solid WR trio, Roethlisberger will need to overcome his plethora of mistakes in 2020. Likewise, his receivers will need to do a better job of holding onto the ball.

Where do the remaining quarterbacks fall in our 2021 fantasy rankings?