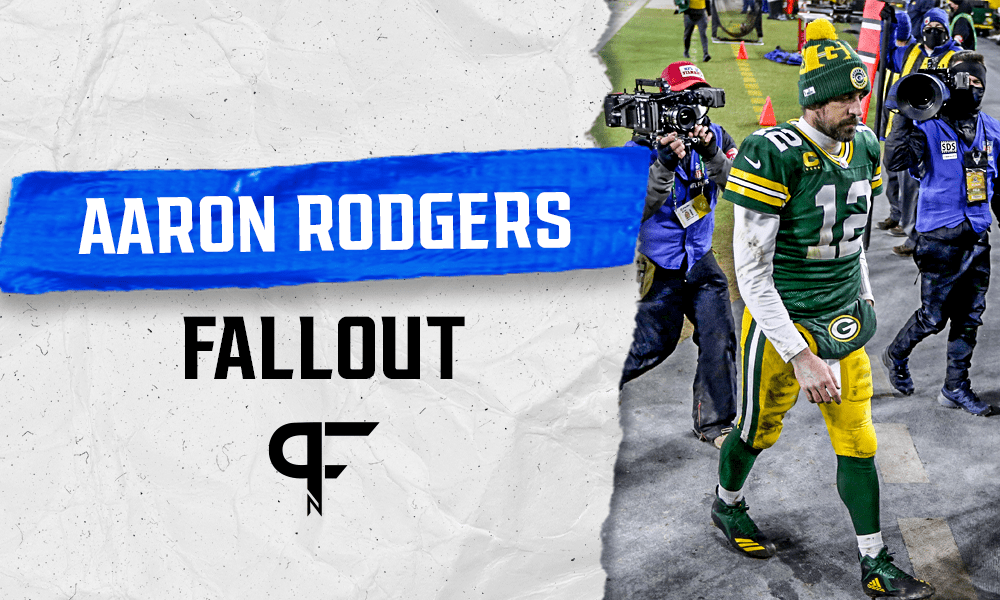 By Adam H. Beasley
July 24, 2021
What's in this article? Click to show
Is Aaron Rodgers retiring?
If Aaron Rodgers leaves, will Davante Adams follow out the door?
Want more NFL news and analysis?

We’ve hit crisis time in Green Bay. Davante Adams has cut off extension talks. Sportsbooks think Aaron Rodgers is retiring. And they both seem determined to force the Packers‘ hand. Here’s the latest on what we are hearing regarding this developing situation.

There’s been a breaking point with Packers general manager Brian Gutekunst. And it probably was a long time ago, to be frank. Look no further than this coordinated messaging overnight by Green Bay’s twin stars Friday — both Rodgers and Adams posted the same image on Instagram of late-stage Bulls Michael Jordan and Scottie Pippen.

Aaron Rodgers and Davante Adams both posted the same image on their Instagram story. pic.twitter.com/ZuBP0ifTwy

Is this their Last Dance? Or have they already danced it?

If Aaron Rodgers leaves, will Davante Adams follow out the door?

Despite a largely quiet few months on Rodgers’ part, his mindset hasn’t changed. He wants out of Green Bay, disillusioned by Gutekunst’s leadership.

As a disclaimer: What we’ve heard about this situation, we’ve heard second and third-hand. But it gibes with what’s known publicly:

Rodgers is famously sensitive — overly so, in the view of some — and he feels disrespected by a series of organizational decisions. Most notably, but not limited to, the team trading up for Jordan Love in 2020 without looping him in about their plans. But there were a number of smaller slights, like Gutekunst cutting Jake Kumerow in 2020 literally a day after Rodgers gushed over the young receiver and said he was a lock to make the team.

You can draw a direct line from that relatively minor roster move to late Friday’s social media messaging, which was an obvious show of solidarity between Rodgers and Adams. And they’re not posturing. We’re told Adams has no interest in staying in Green Bay if Rodgers is gone.

Rodgers, the smart money believes, is more likely to retire than to play another season for Green Bay. Sportsbooks have pulled futures bets involving the Packers over speculation that he’ll hang it up next week. Rodgers’ agent, David Dunn, played this card a decade ago when Carson Palmer wanted out of Cincinnati. He successfully forced a trade in 2011 by retiring.

If Rodgers files the same paperwork, the Packers’ bluff will be called. Will they truly dig in their heels and refuse to trade him?

Rodgers was nearly traded to Denver

Logic would suggest no. The Denver Broncos are among several teams that would offer plenty for Rodgers in a trade. And no matter how stubborn the Packers’ front office is — the word used in industry circles is “arrogance” — it’s hard to envision a normal functioning organization not eventually bowing to reason.

I worked in the @packers front office for ten years.
I am glad I don’t work there anymore.#drama

There are reasons to believe otherwise. There was a leak to ESPN last week that Rodgers turned down an extension that, on paper at least, would have made him the league’s highest-paid player. Rodgers would have no motivation to make that information public; the Packers would have plenty.

PFN’s Chief NFL Analyst Trey Wingo and Mark Schlereth discussed that dynamic and something even more revealing earlier this week. Based on Schlereth’s reporting at the time plus an odd back and forth he had with Rodgers around the NFL Draft, there’s reason to believe Rodgers expected the Packers were going to trade him to Denver back in April, only to see Green Bay blow up the deal.

This all leads back to Gutekunst, who’s been the Packers’ GM since 2018. Rodgers is not a fan — far from it. But he’s not alone in that opinion. Gutekunst is notoriously a terrible communicator, based on people who have had direct interaction with him.

And then there’s the way the Packers go about doing business. They hate, hate, hate giving out guaranteed money beyond signing bonus. That’s presumably part of Adams’ frustration.

At some point, Green Bay, Pittsburgh & Cincinnati will be forced to change their preferred veteran contract structure where the only true guaranteed money is signing bonus. Green Bay’s lone exception has been Aaron Rodgers’ contracts. https://t.co/R2BpCKmFmK

See another familiar team name? Cincinnati again. Not a coincidence.

Rodgers has the leverage to simply walk away if he isn’t traded. He’s a first-ballot Hall of Famer and has all kinds of interests outside of football.

Adams, meanwhile, probably cannot apply that same pressure. He’s still just 28, and while $49 million in career earnings isn’t chump change, he has years of peak earning potential ahead of him.

But players are empowered and emboldened as never before, even in the NFL. We don’t know for sure how this will end. Some believe the Packers will indeed play hardball, and Rodgers isn’t going anywhere.

But don’t doubt either player’s ability to get what they want. Jordan and Pippen were willing to end a storied run when it became untenable. Their made-for-TV example could be followed in the coming days.