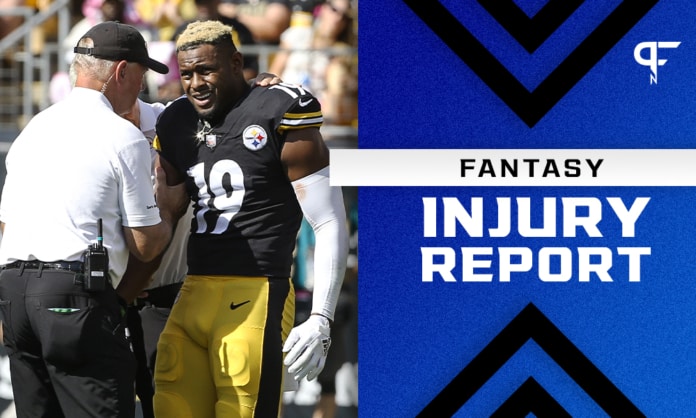 Following an exciting Week 5, what key fantasy football players will appear on the injury report, and what updates do we have on them?

While rankings and projections are beneficial, few things are more important in fantasy football than following injury updates. Injuries not only impact the player in question but the teammates and the offenses around them. Here’s an update on some critical injury reports to watch and their fantasy football impact.

It seems unnecessary to ever include Tom Brady on an injury report because he always plays. Ian Rapoport of NFL.com reported that Brady is dealing with a thumb injury. There is exactly a 0% chance Brady misses Thursday Night Football against the Eagles.

Joe Burrow went to a local hospital following the Bengals’ overtime loss to the Packers due to a throat contusion. He is expected to be fine.

Justin Fields hyperextended his left knee in the Bears’ win over the Raiders. Tom Pelissero of NFL.com reported that Fields is expected to be fine.

Taysom Hill sustained a concussion in the Saints’ victory over Washington. He will go through the protocol and has a good chance to get cleared for New Orleans’ next game, which isn’t until Week 7 as they are on bye this week.

There were no new updates Monday on Daniel Jones. The Giants’ signal-caller will go through the concussion protocol with the hopes of getting cleared in time for Sunday’s matchup against the Rams.

In a complete surprise, Cam Inman reported that Trey Lance is dealing with a knee sprain he sustained at an unknown time during the 49ers’ loss to the Cardinals. It’s not believed to be a long-term injury, and the good news for Lance is the 49ers are on bye this week. The bad news is Jimmy Garoppolo is likely going to return as well.

At this point, fantasy managers need to just sit tight on Lance through the bye and check back for updates throughout theis week/next week.

Russell Wilson tore a tendon in his right middle finger last Thursday night. He will miss the first starts of his career — at least four of them — as he works his way back. Wilson is hoping to return after a month, but he may be out closer to 6-8 weeks. Geno Smith will man the fort in Wilson’s absence.

The oft-injured star running back was sporting crutches and a walking boot after spraining his ankle in the Giants’ loss to the Cowboys. Saquon Barkley is out Week 6 but hoping to return in Week 7. That goal is likely ambitious, but the good news is Barkley avoided serious injury and will likely return after 2-4 weeks.

Mercifully for Dalvin Cook and his fantasy managers, the Vikings held him out of Sunday’s game against the Lions. The week off should allow his balky ankle to heal up and give him a good shot at returning in Week 6.

Rapoport reported that Clyde Edwards-Helaire sprained his MCL in the second half of the Chiefs’ Sunday night loss to the Bills. MCL sprains are typically 4-6 week injuries. Darrel Williams will operate as the lead back in the interim, with Jerick McKinnon mixing in.

After practicing on a limited basis all of last week, the Panthers wisely held out Christian McCaffrey to ensure he fully recovers from his strained hamstring. The good news is the Panthers released Rodney Smith on Monday. They would not make this move unless McCaffrey was set to return. Get ready to reinsert CMC into fantasy lineups in Week 6.

How are the fantasy-relevant wide receivers dealing with injuries?

Quintez Cephus fractured his collarbone in the Lions’ last-second loss to the Vikings. He will go on IR and miss at least two months, if not the rest of the season. The Lions are looking at two receiver sets of Amon-Ra St. Brown and Kalif Raymond.

Kenny Golladay was diagnosed with a hyperextended knee. According to Ian Rapoport, the injury is not serious, but Golladay won’t play Week 6 and might miss Week 7 as well. The Giants could really use one of Sterling Shepard or Darius Slayton back from injury. The healthiest wide receivers on the roster are currently John Ross and Collin Johnson.

Tyreek Hill has been dealing with knee tendinitis the entire season but has yet to miss a game. According to Adam Schefter of ESPN, Hill is expected to be fine. No reason for concern here.

A.J. Brown returned from his strained hamstring after just a one-week absence, but Julio Jones is now going on two missed weeks. We haven’t received any new information on Jones’ hamstring or his status for Week 6.

Jarvis Landry is eligible to be activated from IR this week. Kevin Stefanski said Landry is doing some running, which is an encouraging sign. However, it does not seem like he will return this week, with Week 7 seeming more likely.

I’m ready to declare 2021 a lost season for Curtis Samuel. He just can’t seem to shake this groin injury. My guess is he tried to tough it out simply because he doesn’t believe another week of rest is going to do anything after three months of rest didn’t heal it over the summer. Samuel is unlikely to make an impact this season.

The Steelers’ second win of the season was a pyrrhic one as it cost them JuJu Smith-Schuster. The Steelers placed JuJu on IR, and he is done for the season with a dislocated shoulder. Diontae Johnson and Chase Claypool will see a more consolidated target share, while James Washington will be the WR3 upon his return from injury.

So apparently, the Giants just have no players left. Kadarius Toney, who opened the season as New York’s WR4, sprained his ankle on Sunday, according to head coach Joe Judge. He did not describe Toney’s injury as significant but fell short of offering a positive outlook on Toney’s chances of playing this week.

At this point, it’s anyone’s guess as to what the Giants’ wide receiver corps will look like if none of their top-four receivers can play. John Ross and Collin Johnson appear to be the top-two remaining pass catchers, which is a disaster for a team already missing its RB1 and QB1.

Are there tight end injuries we need to be concerned about?

Rob Gronkowski has missed the Bucs’ last two games with cracked ribs. The good news is Gronk reportedly has a chance to return this week. If the game was on Sunday, he would almost certainly be back. Since it’s on Thursday, it’s possible Gronk is held out one more week.

Maxx Williams sustained a gruesome-looking leg injury on Sunday. His season is unfortunately over.