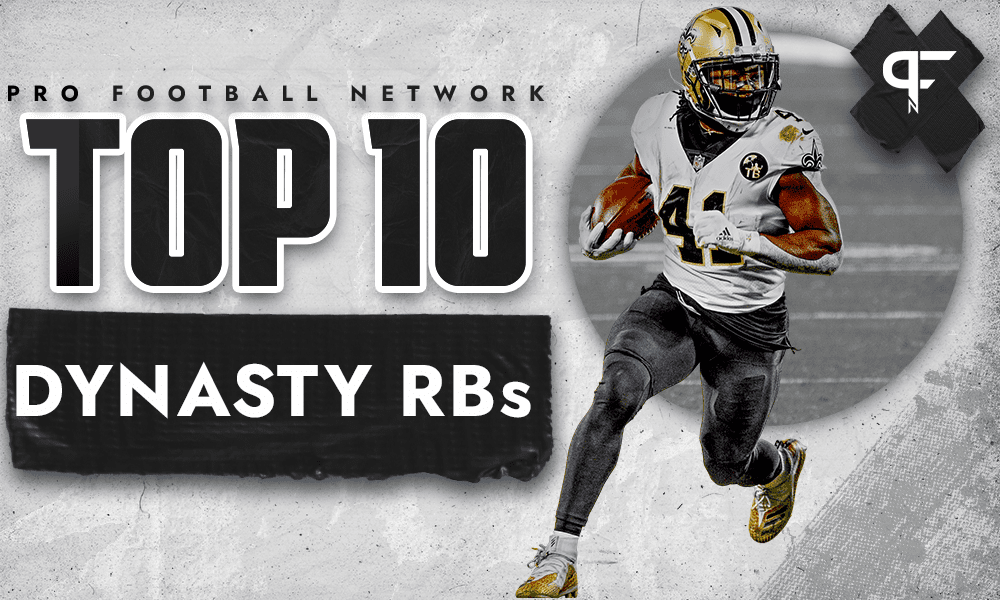 As dynasty fantasy football drafts continue to fire up for the 2021 season, differentiating between the elite players at each position can come down to the slimmest of margins. While factors such as age, production, and the supporting cast all play their part, we are here to help you disentangle all of that and make an informed decision. Here are the top 10 dynasty RB rankings for the 2021 season.

The following dynasty RB rankings are based on PFN’s consensus 2021 dynasty rankings. Please also be sure to check out our 2021 dynasty rookie rankings prior to your fantasy football drafts.

Who are the most consistent playmakers at the RB position? Let’s dive in.

We made mention last month that one RB that could tumble in value was Aaron Jones. It has nothing to do with Jones’ talent and everything to do with his direct status with Aaron Rodgers. We’re still not sure whether Rodgers will remain in Green Bay or not. Furthermore, we have no context as to what a non-Rodgers-led offense would look like and how much it would hurt production. Thus, dropping Jones down from the top 10 RB dynasty rankings in 2021 seems like the right call for the time being.

Taking his place is a player who’s no stranger to the top 10 — Ezekiel Elliott.

Elliott had a “down year” by his standards in 2020, finishing the year as the RB9 in PPR formats with an average of 14.9 fantasy points per game. Although an RB9 finish should be a far cry from a fantasy bust, it was not what managers had in mind when they took him at No. 3 overall in drafts.

However, like the rest of the Dallas Cowboys’ offense, Elliott’s production took a massive drop when Dak Prescott went down for the year. For some reason, though, we seem to give the benefit of the doubt to the rest of the cast. On the other hand, in Elliott’s case, it’s treated as a sign that he’s already on the decline.

In truth, up until Week 5 (when Prescott was injured), Elliott was the RB3 in fantasy as managers expected him to be. Unfortunately, with Andy Dalton and Ben DiNucci under center, Elliott was barely an RB2 the rest of the way.

With Prescott ready to return, there’s no reason Elliott won’t be the dominant force for fantasy as he once was. Tony Pollard has standalone value, but he’s not a threat to take production away from Elliott. At 25 years old, he still has some years left of high volume and is one of the few bell-cow running backs remaining in the NFL.

A strong performance in 2021 could lead Elliott even higher in our top 10 RB dynasty rankings.

When the Lions finally handed over the backfield to D’Andre Swift in 2020, he showed why he was one of the class’ best backs. The Georgia Bulldog played in 13 games (four starts) and rushed 114 times for 521 yards and 8 touchdowns. Additionally, he caught 46 passes for 357 yards and 2 scores. Swift recorded double-digit fantasy point games in 10 of his 13 games, including six above 15 PPR points.

One overlooked factor for Swift is the addition of Anthony Lynn. Since 2016, running backs in Lynn’s offense have averaged 28.3% of the team’s targets and never less than 24.1%. Just look at Austin Ekeler for evidence of how this can affect someone’s dynasty value. Swift was arguably the best pass catcher in last year’s class and should thrive in this offense.

However, it can’t all be positives for Swift’s outlook. For starters, he is tied to a bad team at the beginning of a rebuild. This will limit scoring opportunities.

Additionally, the Lions added Jamaal Williams in free agency this offseason. Initially, this move did not garner a lot of fantasy attention. However, there’s been a shift in philosophy since Lynn referred to Williams as an ‘A’ back. At any rate, this has the look of a running back by committee.

For Swift to maintain his 2021 dynasty RB9 ranking, we are banking on the passing production to offset the lack of red-zone opportunities. This is feasible, as even bad football teams produce valuable fantasy assets. Do not let the team’s struggles and a crowded backfield deter you from selecting Swift in upcoming dynasty drafts.

At what point do the wheels fall off? If you can answer this, you can solve the riddle that is Derrick Henry’s dynasty value. We are asking questions about the back-to-back rushing leader and if you think he is worth the risk. How absurd is that? While slightly ridiculous, it is valid.

Over the last two seasons, he’s averaged 340 rushes for 1,783 yards and 16 rushing TDs. It’s the attempts that are the concern. Henry is coming off a season of 378 attempts and now heads into a 17-game schedule. Can he hold up to this workload?

There is also the unknown of a new offensive coordinator with Todd Downing replacing Arthur Smith. Downing was Tennessee’s TE coach for the previous two seasons.

If anyone could ever be an outlier for volume sustained over multiple years before a massive regression, it is Henry. However, if you are a team outside of contention, Henry’s value could be best utilized as a trade asset to help build your roster. He is still one of the highest-ranked RBs in dynasty for 2021, but will that be the case for 2022?

If not for the horrid Florida State offense, Cam Akers would have been in the running for the RB1 in rookie drafts last year. I don’t think people understood how truly skillful Akers is. For a while last season, neither did the Rams, despite the draft capital invested in him.

Akers was stuck in a mind-numbing three-way split for touches with Malcolm Brown and Darrell Henderson. That will not be the case in 2021, as Sean McVay has stated that he views Akers as an “every-down back.” In truth, this process started last season — throw out the RB45 finish of 2020 — that is not how you should be valuing Akers in 2021 RB dynasty rankings.

Akers took control over the Rams’ backfield starting in Week 13 with 21.5 carries and 2.8 targets per game while playing over 60% of the snaps in his last four regular-season games. The lone downside was he scored just once during this stretch, which lowered his points per opportunity to 0.57.

That threshold is his floor, especially in an offense that should score more with Matthew Stafford under center. If you took his 24.3 opportunities and extrapolated that to a 16-game pace, that’s 221.61 PPR points. That would have been the RB10 last season.

Akers is already trending upwards in our dynasty RB rankings, and expectations are that he will continue to do so for the next several years. Take advantage of his RB7 value — he is going lower than this in current startups.

Although he played in just 12 games last season, Nick Chubb remained one of the best pure rushers in the NFL. Chubb had 207.7 PPR points (17.3 ppg) with 1,067 rushing yards and 12 TDs. But did you know he was not even the highest-scoring RB on his team? Kareem Hunt had 218.5, although he was quite far behind in per game average with 13.7.

On the other hand, this is also the issue for Chubb, as he shares a backfield with an RB who would start for nearly every other team in the NFL.

The topic that is not discussed enough is both Chubb and Hunt are free agents after the 2021 season. I doubt the Browns would be willing to meet the asking price of both RBs, so who do they value more? I believe it is Chubb, but the market will pounce should either Browns RB make it to the 2022 offseason.