This morning, Adrian Peterson was cut by the Washington Football Team. In some ways, that decision makes sense. Despite his rather remarkable career, Peterson’s best days are almost certainly behind him. He’s 35 years old, ancient by running back standards, and is going into his 14th NFL season. Only the seemingly ageless Frank Gore has been running between the tackles for longer.

However, Peterson’s age hasn’t prevented him from continuing to be productive. In 2019, thanks to injuries to Derrius Guice, Peterson was thrust into the starting role for the majority of the season, totaling 898 yards and five touchdowns on the ground. Despite what would appear to be decent production, Washington decided to move on. The question now is, what will Peterson’s new team, whichever one that might be, get from their new running back?

Peterson’s statistics from last season aren’t likely to blow anyone away. That said, Washington’s situation at running back was rather tumultuous thanks to Guice’s constant injuries. So, let’s use PFN’s Offensive Share Metric (OSM), which measures how much impact a player had on their own statistics, and therefore how much they influenced the offense overall, to measure Peterson’s actual value to the team (it is important to note that the OSM does not take a running back’s receiving statistics into account, but in Peterson’s case, that doesn’t make much of a difference).

In 2019, OSM gave Peterson a grade of 16.85, which ranked 15th out of the 48 running backs that qualified for a grade last season. It would be a stretch to call that grade elite, but the fact that Peterson can provide more value than a majority of the NFL’s starting running backs at his age is still impressive (that’s not entirely true, since not all the running backs ahead of him were starters, but you get the idea). More importantly, it indicates that he can still be a valuable offensive asset to whichever team ends up signing him.

Explaining the metrics that went into calculating Peterson’s OSM grade

Peterson’s grade was the result of solid performances across multiple different metrics. The first was his yards per carry (YPC), a statistic most of you should already be familiar with. Peterson’s 4.3 YPC ranked 20th in the NFL; not great, but better than more than half of his NFL counterparts. The second relevant metric is a running back’s efficiency rating, which, assuming you don’t read about the OSM here at PFN on a consistent basis, you may not have heard of.

In short, the efficiency rating is calculated by taking the number of yards of physical distance a player ran for each rushing yard they gained. It measures how efficiently a running back was with their movement. As with his YPC, Peterson’s performance on this metric was slightly above average. At 3.89, it ranked 23rd, just barely in the top half of the NFL.

Based solely on those statistics, you would expect Peterson’s OSM grade to fall somewhere in the low 20s. However, as we have already seen, Peterson outperformed those expectations in 2019. The explanation for that discrepancy lies in a third metric, one that provides essential context to the rest of Peterson’s statistics.

The NFL refers to it as the “8+ defenders in the box percentage”, or “8+D%” for short. That name tells you most of what you need to know about the metric; it keeps track of the percentage of time that eight or more defenders were stacked in the box when the ball was snapped while the running back was on the field.

In Peterson’s case, he saw eight or more defenders around the line of scrimmage 29.38% of the time, the 12th-highest percentage in 2019. Therefore, while Peterson may not have been exceptionally efficient or productive last season, he found himself in difficult situations significantly more often than most of his counterparts around the league. He needed to do more work to get his statistics than the majority of other NFL running backs, and he still produced at a better than average level.

Peterson’s season-long OSM grade can tell us a great deal about his level of play, but looking at his weekly grades will provide us with more insight into his 2019 performance. In the chart below, you can see how his weekly grades varied throughout the season. Each week’s grade is represented by a black dot, while the yellow line represents the average overall grade for running backs last season. 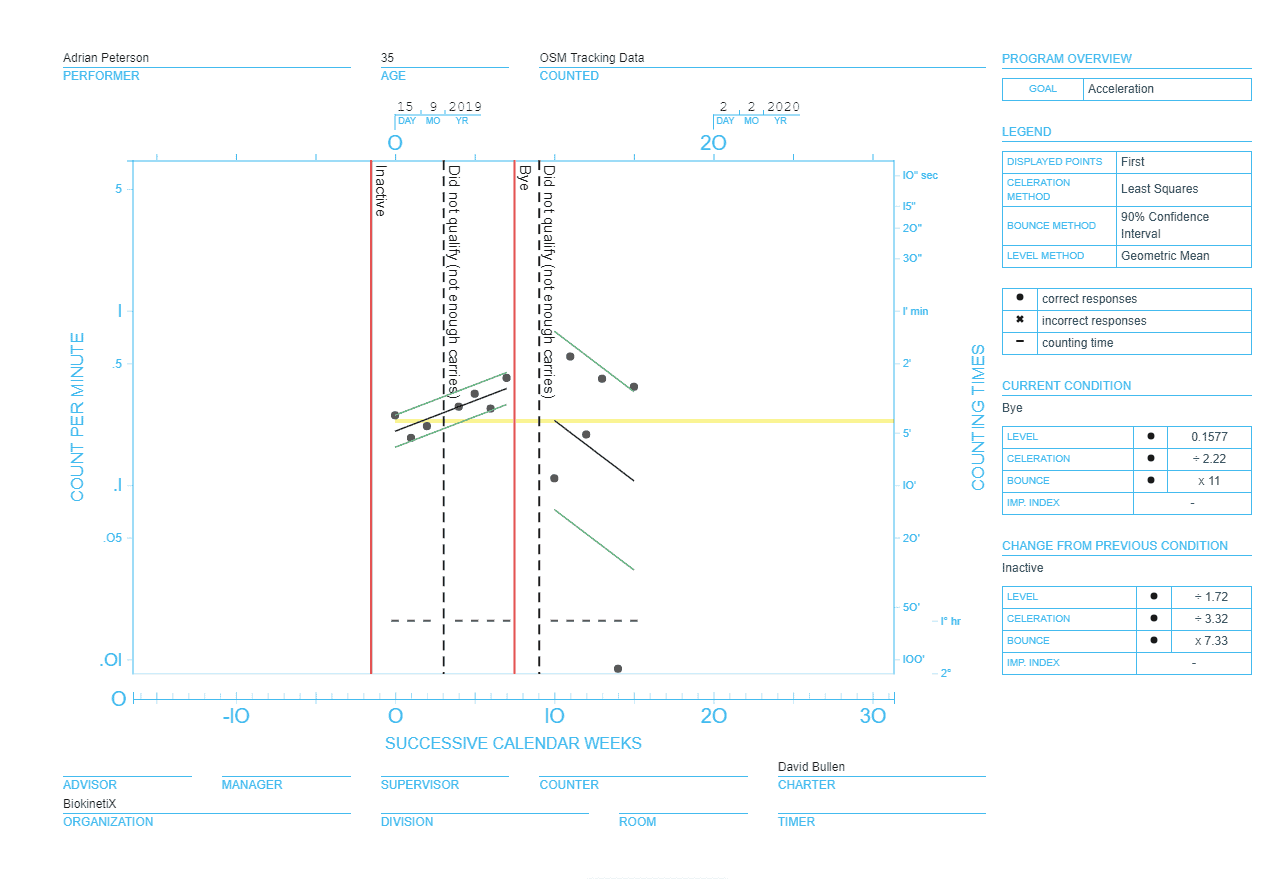 Up until Washington’s bye week, Peterson was stellar. His grades started around the league average and steadily increased at a consistent pace. After the bye, though, things got significantly messier. His grades shifted dramatically, ranging from a 32.79 in Week 13, the second-best grade by a running back that week, down to a 0.53 in Week 16, indicating that he had functionally zero impact on Washington’s offense in that game.

It could be the case that, due to his old age, Peterson’s legs couldn’t hold up as the season went on, causing his performances to become more inconsistent. However, there is another, more interesting alternative. In a curious coincidence, the start of Peterson’s sudden inconsistencies coincided with Guice’s brief return from injury in Week 11. He was only in the lineup for four weeks before getting injured once again, but it is possible that his sudden presence in the rotation threw Peterson’s game out of whack.

Regardless of the exact explanation though, Peterson’s struggles late in the season are somewhat concerning. If he can’t stabilize his play, his new offense will need to provide him with a solid backfield compatriot, one that can pick up the slack whenever Peterson isn’t playing up to his usual standards.

At this point in his career, Peterson probably isn’t going to win the rushing title or make the Pro Bowl any time soon. He clearly isn’t the player that he once was from a statistical perspective.

However, he can still be a strong presence in his new team’s backfield, especially if he can clean up the inconsistencies that gave him trouble late in 2019. Whichever team picks him up will be getting a solid player who, despite being well past the age when a running back normally stops being effective, can still provide a great deal of value to their offense. And, thanks to his age, they might get him at a favorable price as well.