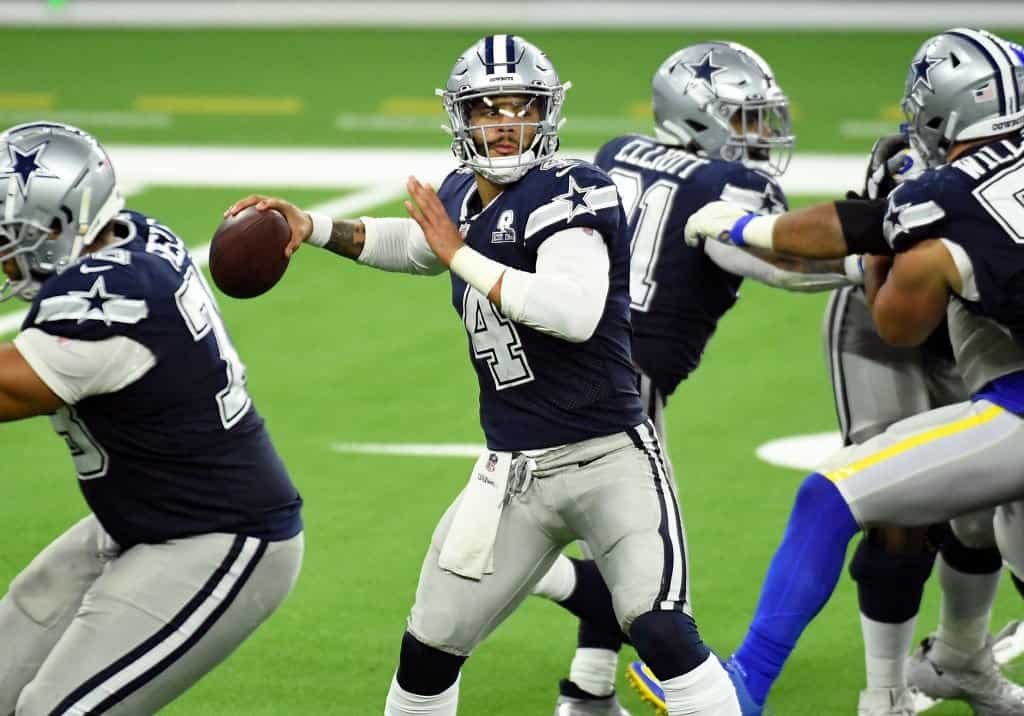 INGLEWOOD, CA - SEPTEMBER 13: Dak Prescott #4 of the Dallas Cowboys throws a pass during the second half against the Los Angeles Rams at SoFi Stadium on September 13, 2020 in Inglewood, California. (Photo by Kevork Djansezian/Getty Images)

The Dallas Cowboys head into Week 2 with more questions than answers after a Week 1 loss at the hands of the Los Angeles Rams. Adding to the sting of defeat, the Cowboys left Los Angeles with injuries to Leighton Vander Esch and Blake Jarwin. That being said, there’s plenty of time to rebound, and the Falcons provide a good opportunity to get a win. Here are a few keys for the Cowboys vs. the Falcons in Week 2.

In Week 1, the Atlanta Falcons were torched through the air, allowing Russell Wilson to go 31-35 for 322 yards and four touchdowns. Wilson has weapons, but he doesn’t have the weapons the Cowboys have at their disposal. The plan should be to throw early and often. One of the primary weapons for the Seahawks was Chris Carson, who recorded six receptions for 45 yards and two touchdowns. D.K Metcalf was also able to spread the field and get open on some deeper throws.

The Cowboys have two RBs that can be utilized in the screen game effectively. Additionally, the Cowboys have Amari Cooper, Michael Gallup, and CeeDee Lamb available as well. It will be a “pick your poison” type of situation for the Falcons passing defense.

I’m not betting on the Falcons being able to make the necessary adjustments to stop a Cowboys passing attack that is, on paper, more dangerous than that of the Seahawks. Of course, it’s all theoretical, but the Cowboys should be able to recreate the Seahawks’ success in the air. The Cowboys vs. Falcons in Week 2 could be a high scoring affair.

Focus on limiting Julio Jones on first down

Well, not many things changed for the Falcons for the beginning of 2020. The Falcons lead the league in passing attempts finishing with 54 in Week 1 against the Seahawks. The Falcons had three receivers cross the 100-yard mark on Sunday and still lost the game. With arguably the best WR in the game on their side, the Falcons will continue to do just that against Dallas on Sunday.

Additionally, his 592 yards are almost triple his yardage from any other down and distance. Jones will get his yardage, but if the Cowboys can limit him on first down, it may severely hamper one part of the Falcons primary gameplan early on.