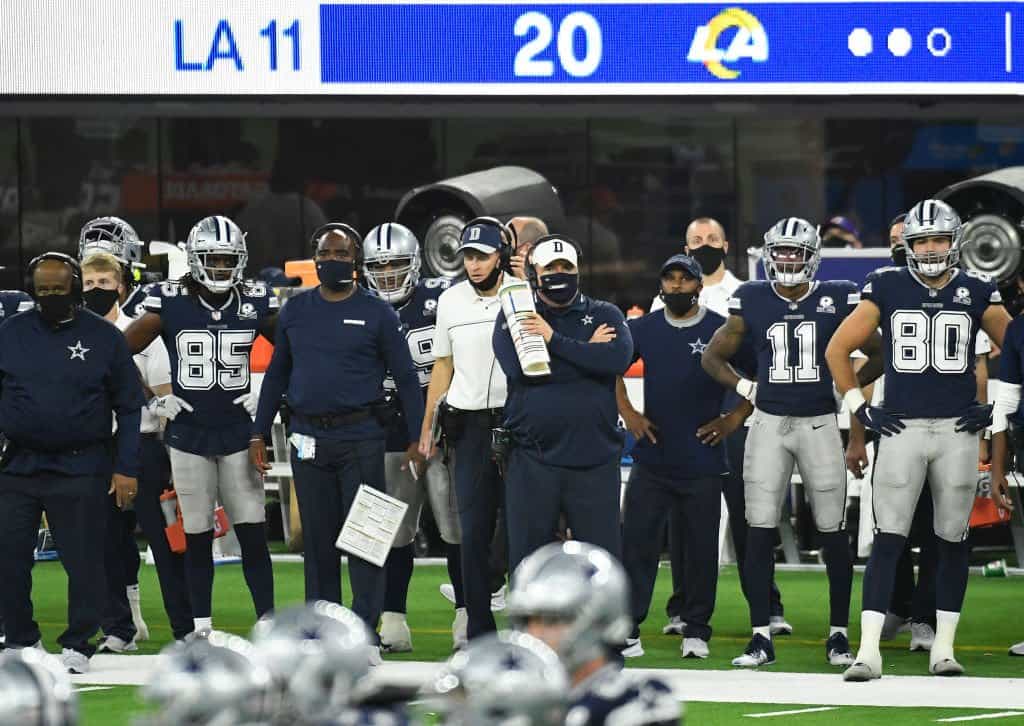 INGLEWOOD, CA - SEPTEMBER 13: Head coach Mike McCarthy of the Dallas Cowboys follows the game from the sideline during the second half against Los Angeles Rams at SoFi Stadium on September 13, 2020 in Inglewood, California. (Photo by Kevork Djansezian/Getty Images)

The Dallas Cowboys dropped their first game of the season to the Los Angeles Rams on Sunday night. Even with a new coach and defensive coordinator, it was much of the same for the Cowboys on Sunday night. Adding insult to injury, the Cowboys also lost a few key pieces to extended injuries. The Dallas Cowboys depth took a serious hit on Sunday. Let’s take a look at a few options to help fill the holes left on the depth chart.

A few tight ends to fill out the depth chart

This one is easy. The lowest hanging fruit of them all. Walker would bring playoff experience and veteran leadership that any playoff team could use. Of course, the question with Walker is health and age. With back to back years missing time due to injury, if the Cowboys sign him and he’s gets injured, its back to square one.

A name not well known to many, Heuerman had a few good years in Denver. He has modest receiving numbers in his career posting a stat line of 678 yards and five touchdowns on 106 career targets. But during his time in Denver, Heuerman got plenty of snaps on offense.

2018 was his best year in terms of snap count as he was on the field for 55% of the offensive snaps. He could be a good addition to help strengthen the Dallas Cowboys’ depth in the tight end room.

Options to help out the linebacking core

Easily the worst loss of the night, Leighton Vander Esch also went down with a collarbone injury. He will likely be out for 6-8 weeks of this season. There isn’t a guy out there right now that can come close to providing the type of production the Cowboys expected from Vander Esch, but who are the temporary options to help out the Dallas Cowboys depth?

The release of Todd Davis by the Denver Broncos was surprising for even some within the Broncos community. With his release, however, the Broncos saved five million in cap space.

Davis had productive years in Denver. In 2019, he ranked ninth in total tackles in the league. The only question with Davis is an injury he suffered in training camp and was supposed to be out for 2-3 weeks. He could help alleviate some stress on the Cowboys linebacking core, at least for the time being.

Similar to Walker listed above, the concern with Woodyard is age. Woodyard hasn’t seen significant playtime since 2018. In 2019, Woodyard saw the lowest snap count percentage of his career at only 29%. It wouldn’t be a move that the Cowboys should be too comfortable with, but he could help provide depth, at least until Sean Lee is back, and they have more options.