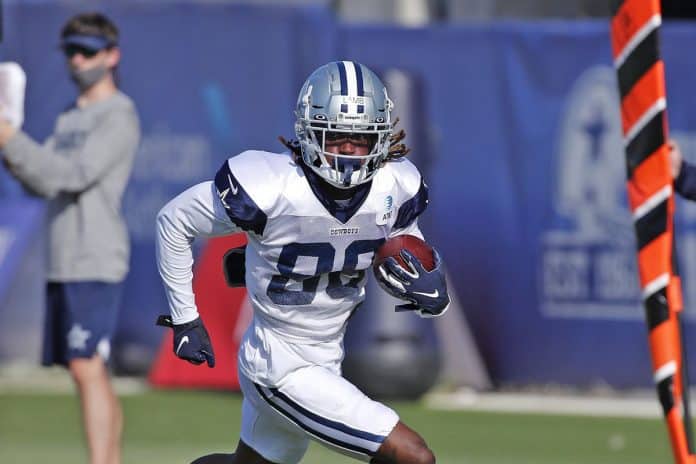 The Dak Prescott-Jerry Jones contract impasse dominated the offseason Dallas headlines, but it turned out to be irrelevant. Prescott is back (as expected) and well-compensated (as expected) thanks to the franchise tag. And with Mike McCarthy replacing Jason Garrett as head coach, CeeDee Lamb joining an already-loaded receiving corps, and Everson Griffen adding juice to the pass rush, the 2020 Cowboys are legitimate Super Bowl contenders (as expected every year, though it never quite works out that way).

The Dallas Cowboys and their range of outcomes

McCarthy spent his countryside-retreat gap year doing more than just sweating all of the Aaron Rodgers toxicity out of his system. He rekindled his love of offensive creativity, allowing him to work with returning offensive coordinator Kellen Moore and design an offense that gets the most out of its many playmakers while avoiding Garrett’s frequent Coaching 101 blunders. The bolstered defensive line compensates for a thin secondary, allowing the Cowboys to dominate the weak NFC East and host some playoff games in Jerry World.

McCarthy’s brochure-sized playbook returns (it contains both types of passing concepts: slants and flats!). The departures of Byron Jones (Dolphins) and Travis Frederick (retirement) weaken the secondary and the offensive line. The Cowboys continue to get ambushed by beatable opponents and make fundamental mistakes in critical situations, resulting in another year of hovering around .500.

Prescott’s receivers dropped 36 passes last year, the highest total in the NFL. Michael Gallup finished second in the league to Julian Edelman with 11 drops, departed free agent Randall Cobb (Texans) added eight. Drop rates for receivers and quarterbacks bob up and down with little year-to-year correlation, so don’t be surprised if Prescott’s numbers get a little better simply because his receivers make fewer mistakes.

With Byron Jones gone, more man coverage will put more pressure on replacement Anthony Brown and rookies Trevon Diggs and Reggie Robinson. Then again, adapting to the Seahawks-style Cover-3 the Cowboys used last year wouldn’t have been easy for the rookies, either.

When Joe Looney replaced Frederick at center during the 2018 season, he was charged with nine blown blocks on passing plays and eight on runs, per Sports Info Solutions. Frederick, by contrast, was charged with 12 and 10 last year and eight and 15 in 2017. Frederick’s absence will be felt in ways that can’t be measured by counting blown blocks, but Looney is an experienced backup, and stalwarts Tyron Smith and Zack Martin are still in their prime, so don’t expect the Cowboys running game or pass protection to collapse.

Ezekiel Elliott led the NFL in red-zone carries with 59, ranked fourth in the league in carries inside the 10-yard line with 31 (the leaders all had 32), and tied for ninth in carries inside the five-yard line with 12. He tied Dalvin Cook for the league lead with nine goal-line touchdowns. McCarthy is likely to spread the ball around in the red zone more than the arch-conservative Garrett, but Elliott should still get the call around the goal line often, and the Cowboys line remains stout enough to help him punch it in.

Related | What will the Dallas Cowboys offensive depth chart look like in 2020?

Amari Cooper is a well-established fantasy heartbreaker, and last season was no exception: 22 catches for 373 yards in his two biggest games (Packers, Vikings), four catches for 41 yards in the games immediately following them, and lots of variation and mystery in between. With Lamb and Gallup around, Cooper’s disappearances could grow more frequent. If you draft Cooper as your WR2, trade him immediately after his annual 200-yard game. You’ll be happy that you did.

The Cowboys should have won 11 games last season according to Football Outsiders metrics. They went 8-8 thanks to Garrett’s ability to step on every strategic rake in the garden and their talent for stringing failures together (a fourth-down stop followed by blown deep coverage in the Jets loss; a Josh Allen fumble-rumble fourth-down conversion followed by a Philly Special touchdown in the Thanksgiving loss to the Bills, etc).

The Cowboys are potential Super Bowl contenders who spent the last two seasons playing as if they’re letting fans on an Eagles subreddit write their script. If they can finally eliminate all the unforced errors, don’t be shocked if McCarthy is a Coach of the Year candidate, Prescott earns MVP talk, and Jones tries to take all the credit for a deep playoff run this year.