RAS: Dallas Cowboys have the athleticism at cornerback to replace Byron Jones in 2020

The Dallas Cowboys cornerbacks will be under heavy scrutiny in 2020 following Byron Jones' exit. Thankfully, their RAS scores provide optimism.

The cornerback position is under the spotlight for the Dallas Cowboys in 2020 after they lost one of the league’s premier secondary defenders when Byron Jones departed for the Miami Dolphins in free agency.

Dallas’ young group of corners will enter the 2020 season under significant pressure to step up and fill the void, with their cause not helped by an injury on the defensive line. Gerald McCoy was lost for the season after rupturing his quadriceps tendon and subsequently released by the Cowboys.

Trysten Hill and rookie Neville Gallimore will be required to perform to a level that negates the impact of McCoy’s absence. If they fail to do so and the defensive line struggles to pressure the quarterback, the task facing the secondary this season will clearly be much more difficult.

Related: Which NFL players will step up for injured veterans in 2020?

The challenge the Cowboys’ cornerbacks face is already a daunting one. Jones established himself as one of the top corners in the game with his versatility and athleticism helping him develop into a true shutdown player at the position.

Jones has excelled at defending deep passes. According to the NFL’s NextGen Stats, Jones has allowed only four completions on 22 deep targets as the nearest defender since 2018.

None of the corners on the roster have the reputation of Jones. Still, the Cowboys can afford to be confident they have the athleticism in that area of the team to ensure the drop-off following the exit of the former first-round pick is not too steep, as Dallas aims to return to the postseason under Mike McCarthy. 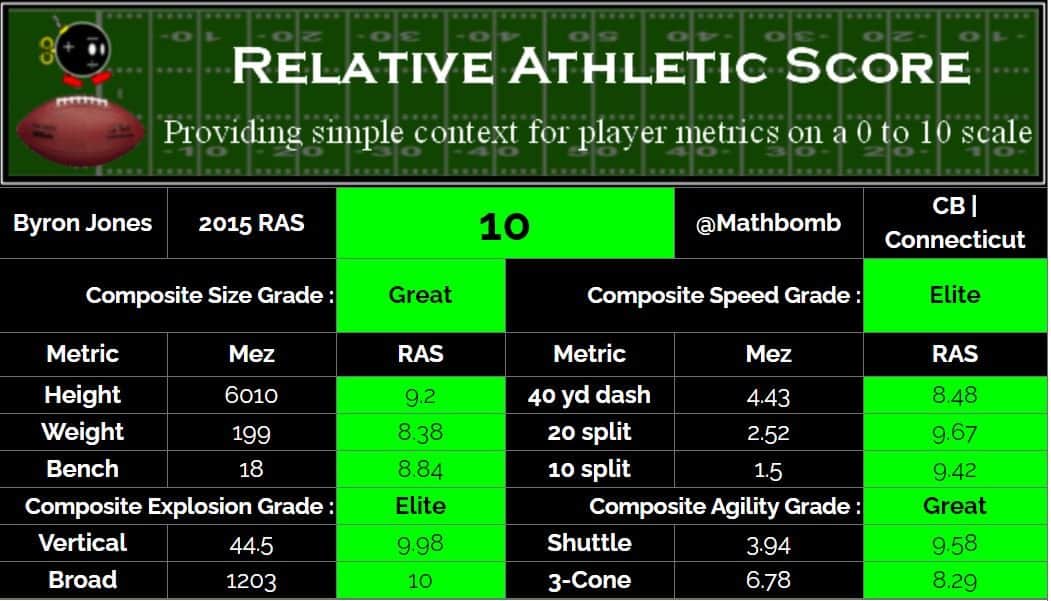 Jones’ elite testing numbers helped solidify his status as a first-round selection in 2015. Coming out of UConn, he received a perfect Relative Athletic Score (RAS) of 10 after starring at the NFL Scouting Combine in the 40-yard dash and the drills that measure explosion.

Though Dallas will miss Jones, the Cowboys drafted a corner with comparable athleticism in the 2020 draft.

Their projected starters for the upcoming season did not impress in testing to the same extent as Jones, yet the physical traits they possess are enough to produce an extremely high standard of cornerback play. 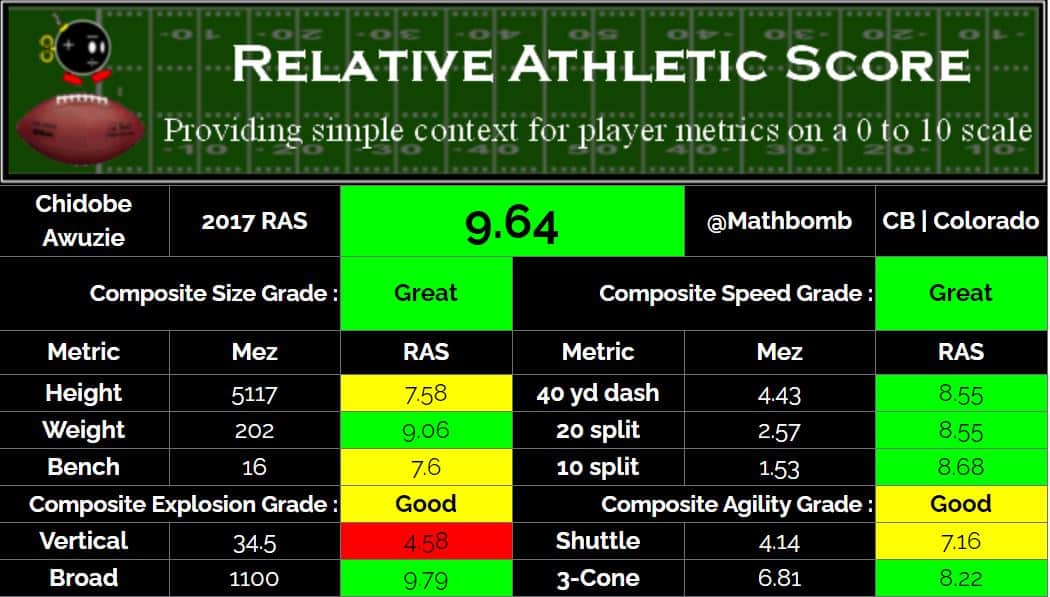 Analyzing the cornerbacks in a training camp preview of the position, Dalton Miller outlined the likely starters for the Cowboys in 2020.

Despite often being picked on by offenses looking to throw away from Jones, Chidobe Awuzie is still expected to start on the boundary, meaning the Cowboys will have an elite athlete among their first-string corners.

Indeed, Awuzie received a RAS of 9.64 for his efforts at the 2017 Combine and – though he was viewed as the weak link across from Jones – his blend of size and speed has translated well to the pros, enabling him to make plays at the catch point with wavering consistency.

Related: Cowboys Players With The Most To Prove: All about defense

He relied on his size to make the second interception of his career in 2018 against the New York Giants, using his leaping ability to capitalize on a poor decision from Eli Manning.

Awuzie knew less about his pass deflection in the 2018 postseason win over the Seattle Seahawks. However, the breakup was just a reward for him cleverly using his hands to stay in tight downfield coverage with one of the premier route runners in the league in Tyler Lockett.

The burst that was evident during his 40-yard dash has enabled Awuzie to make plays like his pass breakup in Week 15 of last season against the Los Angeles Rams, which saw him get an excellent break on the ball to bat it away from Josh Reynolds.

For the Dallas secondary to thrive in 2020, they will need to rely heavier on Awuzie, utilizing his athletic attributes to make more plays on the ball. 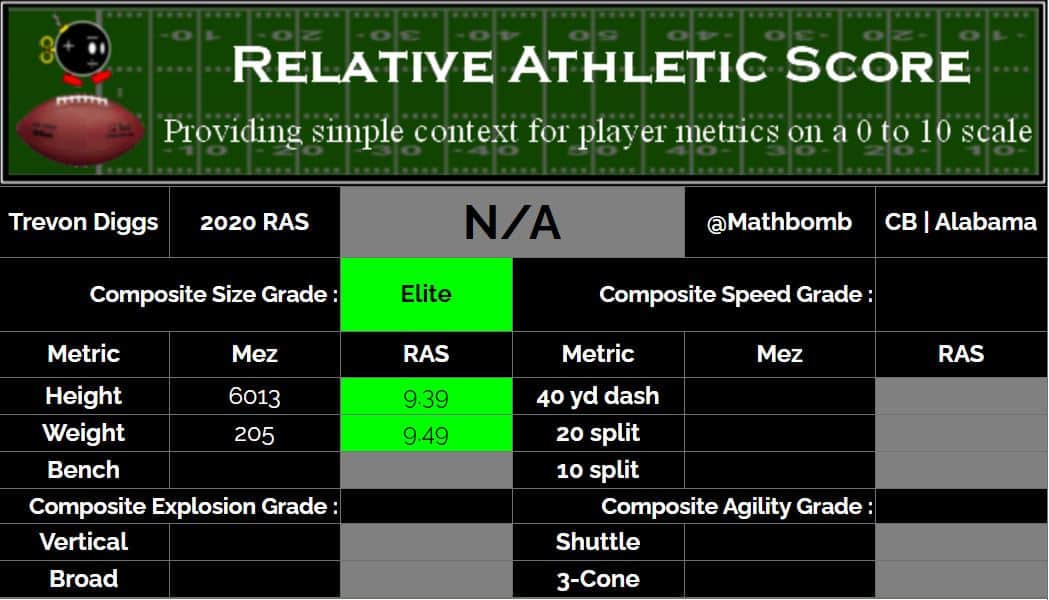 After stealing wide receiver CeeDee Lamb with the 17th overall pick in the first round, the Cowboys selected Alabama corner Trevon Diggs in the second round, and he looks set to step straight into a starting role as a rookie.

Diggs brings elite size but did not qualify for a RAS as he did not perform any drills at the Combine. Yet his on-field play suggests he is a player with the speed to stay with receivers downfield and quickly recover separation.

He has also demonstrated the leaping ability and body control to make spectacular plays at the catch point.

Diggs had eight pass breakups and three interceptions in his final college season, and there will be few in Dallas regretting not paying Jones if he replicates the play he produced for the Crimson Tide in his rookie year. 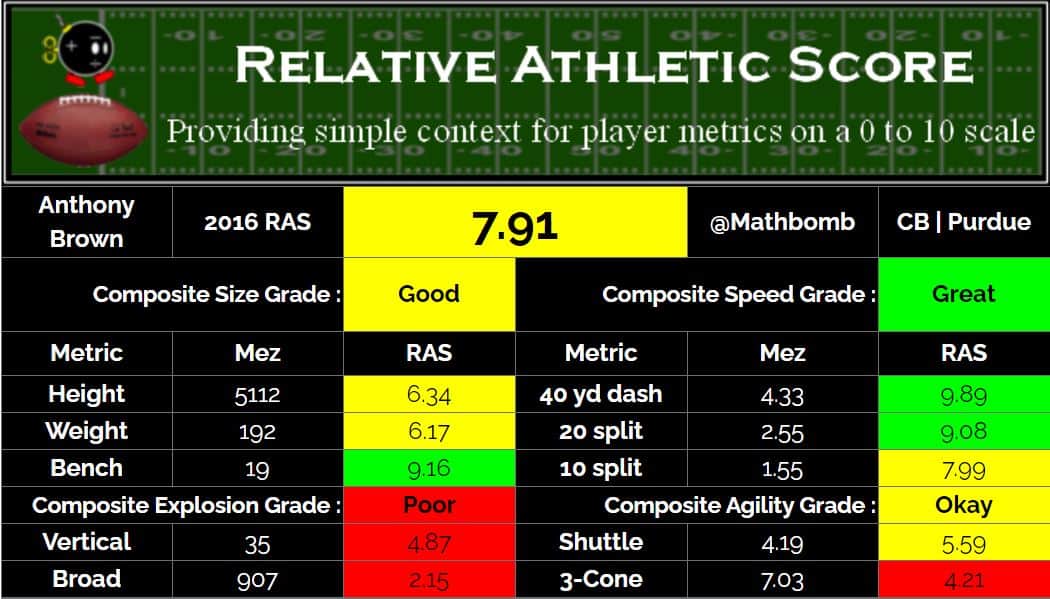 As Miller wrote, Brown is athletically superior to Jourdan Lewis, and that may give him the edge in the slot cornerback battle.

Lewis earned a RAS of just 5.03 coming out in 2017. A year earlier, Brown received a RAS of 7.91, which was built on a tremendous composite speed grade after he clocked a time of 4.33 seconds in the 40-yard dash.

But it was foot quickness that did not shine through during his agility drills that was key to his interception against Washington in Week 12 of 2018. Despite initially hesitating to prevent being picked by an in-breaking route, Brown stayed in coverage on Trey Quinn and got in position to intercept Colt McCoy’s pass, displaying impressive hip fluidity in the process.

Speed was, however, a critical factor for Brown against the Philadelphia Eagles in the same season. The former Purdue corner was initially out of position to deflect Carson Wentz’s pass to Golden Tate but seamlessly broke over the middle of the field make a diving play on the ball.

While that breakup owed to Brown’s ability to read Wentz and react, his athletic pass deflection in Week 3 of last season versus the Miami Dolphins was down to him using his speed to recover separation.

Jakeem Grant got open downfield as Brown was caught spying Josh Rosen as he scrambled to the left. Yet, the former sixth-round pick did a magnificent job of making up the ground and went close to stunningly intercepting Rosen’s throw.

Brown is unlikely to be asked to operate on the boundary as he did on that play with any regularity in the 2020 season. The Cowboys know Brown has the speed and ball skills to make a consistent impact in the slot and, in a cornerback group where they will have to depend on a rookie on the boundary, his reliability in nickel formations will be particularly valuable. 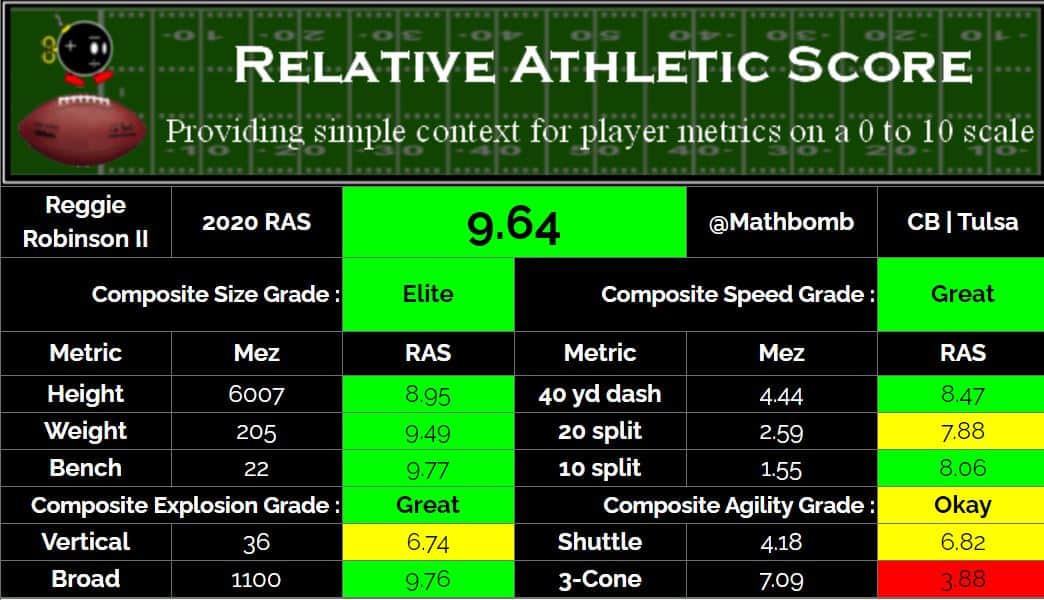 He has thrived at the AAC level, but rookie fourth-round pick Reggie Robinson is the relative unknown in the Cowboys’ cornerback equation.

Robinson is the athlete who compares best to the departed Jones. The former Tulsa corner posted the same RAS as Awuzie, his performance in Indianapolis, resulting in a score of 9.64.

He is another defensive back who offers elite size, and he received high composite speed and explosion grades, with agility the only apparent weakness revealed through his Combine workout.

His supposed failings in that area did not prevent him from making a significant impact at Tulsa. His patient footwork, intelligent usage of his hands, recovery speed, and ball skills helped Robinson rack up 13 pass breakups and three interceptions in his senior season.

Robinson will not be thrust straight into a prominent role as a rookie. Still, he has the highest athletic upside of all the Cowboys cornerbacks and demonstrated nuance in his game in college to indicate the transition to the pros may not be that difficult to make.

Dallas’ defense took a step back in 2019 and ranked 27th in the NFL in turnovers, forcing only 17. The signing of veteran pass rusher Everson Griffen was a move made with improving that figure in mind.

Yet, following Jones’ departure, some may question whether the Cowboys have the talent on the back end to take advantage of any opportunities those up front help create.

However, the testing and film of those tasked with replacing Jones’ production show they have the physical tools and the skill sets to do so successfully. Should Griffen excel in his new home and fellow pass rusher DeMarcus Lawrence enjoys a bounce-back year, then those in the secondary will be in a position to vindicate Dallas’ decision to let Jones walk.