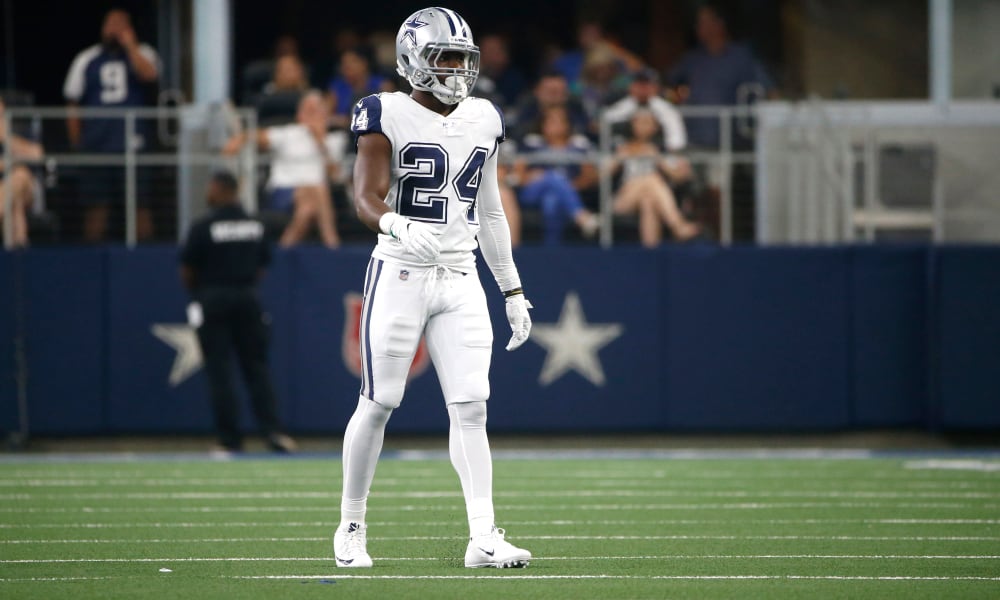 Photo Credit: AP Photo/Ron Jenkins
What's in this article? Click to show
The coverage schemes aren’t going to look the same in 2020
Cowboys cornerbacks: 2020 projected outside starters
Depth pieces: are there any surprises out there?
How does the depth chart look to be shaping up?

It was bound to happen eventually. The Cowboys let one of the best pure cover corners in the league walk so they could then, not pay the quarterback? Anyways, the Miami Dolphins are the beneficiaries of that mistake, as Byron Jones inked a deal in South Beach. Meanwhile, the Dallas Cowboys cornerbacks in 2020 have a lot on their plate. What is this secondary going to look like come Week 1?

That’s a good thing. By now, we’ve all heard the audio of former Bengals safety George Iloka, who told a story about disguising a coverage in practice, only to be yelled at by Passing Game Coordinator Kris Richard. The Cowboys’ continuous arrogance of almost wanting offenses to know what they were going to see, is mind-boggling. For this reason, quarterbacks like Josh Allen and Sam Darnold, young guys who are still getting used to the intricacies of coverages, were able to find success against the Cowboys defense.

The Cowboys now have a tremendous advantage specifically at the safety spot. Their decision to play two free safety types means there shouldn’t be a serious liability in coverage in a more advanced matched-based system. Because of the rules depending on coverage type, those safeties will find themselves in situations carrying slot receivers downfield in man coverage and other man-to-man situations. With that being said, what does that mean for the Cowboys cornerbacks?

This one should be relatively obvious. With the shift in defensive philosophy, every one of the cornerbacks who were on the 2019 roster and beyond, are in uncharted territory. For Cowboys rookie Trevon Diggs, things are no different, especially as a first-year player. From a purely schematic perspective, however, he’s ahead of the curve.

Diggs came from a Nick Saban defense. It’s well known that a Nick Saban defense is one of the most complex around. There are so many different coverages birthed from his RIP/LIZ pattern matching cover three defense. The Saban playbook is extremely complicated, and that should give Diggs a head start on the others, especially given the fact he not only played on the outside at Alabama but in the slot the year prior.

He fits perfectly as a backside or boundary cornerback in a match scheme. In that case, he can use his length, strength, and athleticism to play up on the line of scrimmage playing a lot of M.E.G (man everywhere [he] goes). He’ll have the opportunity to play a lot of M.E.G on outside releases by the receiver. His length, long speed, athleticism, and ball skills make him a nice candidate to carry those players down the sideline and make plays on the ball.

In cone or robber coverages, where he gets to play a deep quarter or deep half, he can really surprise quarterbacks as he appears out of nowhere to defend the post coming from the strong side. Diggs is an exciting addition to the Cowboys’ cornerbacks in 2020.

The other starter on the outside for 2020. Awuzie has gotten a lot of unwarranted vitriol from the fanbase for his propensity to get picked on in coverage. We’re all complicit. But when one goes back and watched what he was in college, and what he’s done so far in the league, he really was just the product of being in the wrong place at the wrong time.

He was opposite a legitimate shutdown cornerback that offenses rarely even attempted to attack. That gave him the brunt of targets, and in those situations, it took some truly incredible throws and catches to beat him. We can argue about the defensive backs not turning their heads until our faces turn blue, but the simple fact is Awuzie wasn’t put in a position to succeed.

As the field or strong side cornerback in a match-based system, Awuzie will be able to play off the ball more often with outside leverage and be allowed to play with his eyes again. Hopefully, there’s a good helping of “box” coverages, where he’ll play man-to-man on the outside receiver unless he goes underneath or runs a hitch, in which case he’ll give a “smash” call and hit the deep quarter coverage to try and jump the corner route that might come.

There is a reason some folks wanted to move him to safety. He plays better when he’s able to keep things in front of him, and a shift in philosophy to pattern-matching coverages will allow him that freedom. It’s a good personnel match, almost like the Cowboys thought about this when they were drafting.

Cowboys Nation loves them some Jourdan Lewis, and it’s easy to see why. He’s affectionately given the nickname “ball god” because when he is on the field somehow the ball seems to end up in his hands. It’s like a magnet. We can all remember the performance against the Saints in 2018, where he shadowed Alvin Kamara around the turf like a three-year-old on a walk with his mother. He never left his side, and the legend grew.

Related | Cowboys Mailbag: What will the defense look like in 2020?

With that being said, he never really fit what Richard wanted in a cornerback. He’s smaller and a bit less athletic than the speedy Brown. And with the lack of reps, Lewis struggled with consistency in coverage in 2019. Then, the Cowboys paid Anthony Brown a 3-year, $15.5-million contract. As the saying goes from the 1976 docudrama All the President’s Men, “follow the money”.

Brown is a speedy former sixth-round pick who burst onto the scene in 2016. Since then, his game has displayed some ebbs and flows, and as an outside cornerback some of his issues were magnified. However, for someone with his feet and athleticism, the slot seems to be a more natural fit.

The emphasis defensively now being to get turnovers, it complicates the outlook of the slot position. Both of these cornerbacks should see the field quite a bit in 2020, but it’s difficult to imagine the Cowboys paying Brown to be the fourth-string cornerback.

But it’s good to have depth.

Depth pieces: are there any surprises out there?

With veteran cornerback Maurice Canaday opting out of the season, the picture of depth in 2020 clears up. Fourth-round pick Reggie Robinson II will hopefully be the fifth cornerback and someone who can contribute heavily on special teams as a gunner, given his speed.

He’s a high upside player who projects as a future starter on the outside, but he’ll have to work to improve technically and become more fluid in his lower half to better mirror direction change. With his height/weight/speed combination, it’s hard to avoid the thought that maybe the cowboys drafted two starting cornerbacks in one year.

A fight to the death for the 6th cornerback spot. Goodwin has been one of the best Cowboys special teams players for years now. However, with the change in regime and the addition of a more expensive name in Chris Worley, this could be the end for his run as special teams ace.

With the addition of Robinson, that decision might be easier than we may think. Worley brings a veteran presence to the Cowboys cornerbacks in 2020. Worley also has quite a bit of experience, playing over 3,000 career snaps between Carolina and Oakland (now Las Vegas.)

Westry is another name to think about stashing on the practice squad while hoping to develop him going forward. The 6-foot-4 cornerback reportedly ran a 4.31 and jumped 38 inches at Kentucky’s Pro Day. It’ll be interesting to see if maybe he is a candidate to make the switch to safety where he can use that straight-line athleticism a bit more instead of being reactionary as a cornerback. It’s tough to maintain fluidity with a sudden change of direction as your legs and body get longer.

How does the depth chart look to be shaping up?