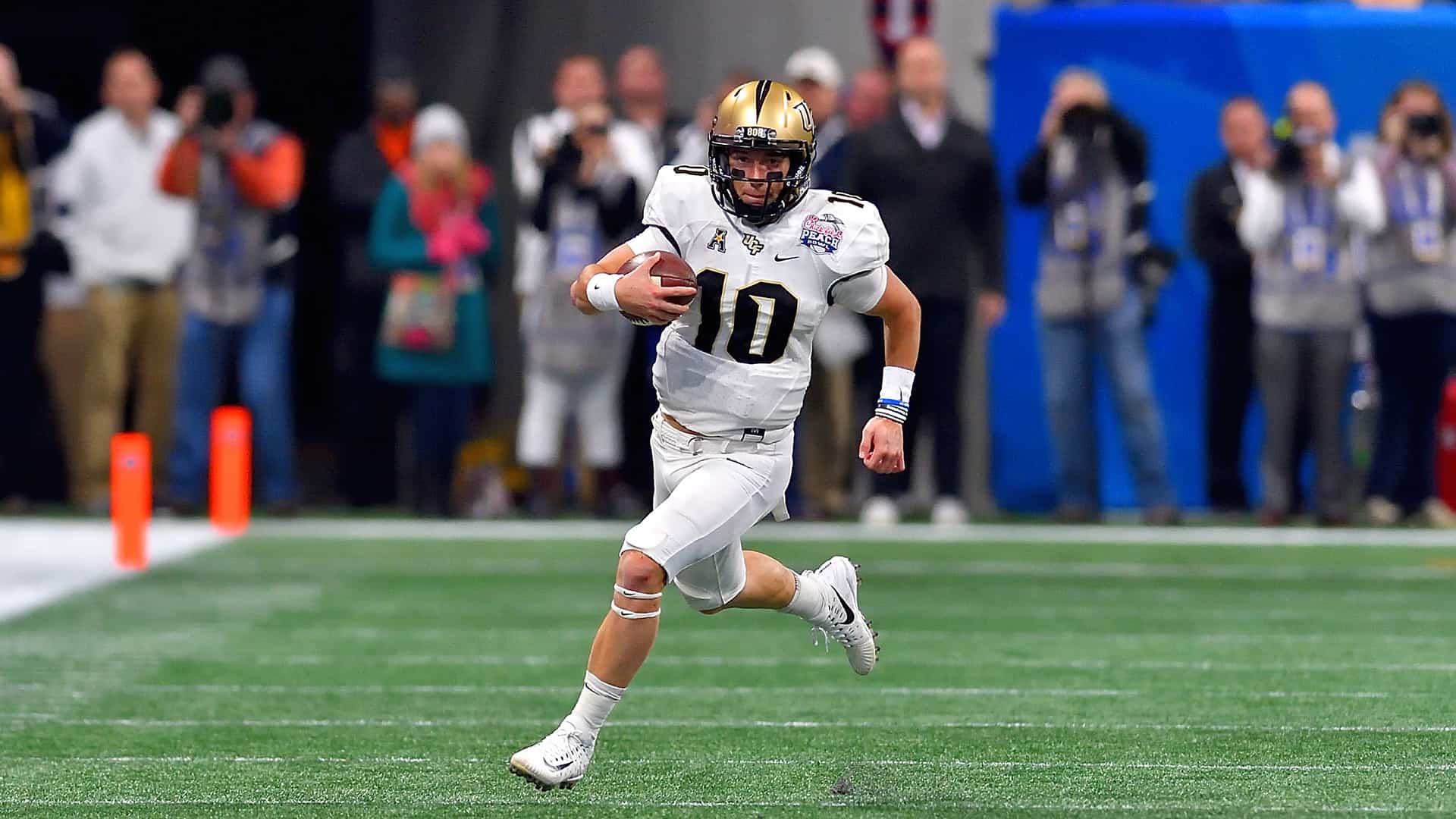 It’s a beloved sport nationwide, but the danger of the controlled chaos created by football can be lost from the comforts of the living room. Every so often, painful reminders of the sport’s unpredictability are witnessed on the field. Near the end of the 2018 college football season, UCF quarterback McKenzie Milton stopped being an NFL Draft prospect and became a harrowing example. But now, two years later, he’s doing everything he can to come back.

UCF quarterback McKenzie Milton’s path back to the NFL Draft

It was on November 23. A home game against South Florida. On third and seven, Milton took a read-option to the right side of the field. It wasn’t long before defenders encased him. Pursued by a lineman, and charging head-on toward a safety, he lowered his shoulders, in a bold gambit to earn the first down.

As Milton went down, the incoming safety dove at his knees, and at the same time, the defensive lineman weighed him down from behind. Milton’s right knee was caught between them, the torque from the forceful impact twisting it in an instant. Milton hit the ground, and he wouldn’t get up.

A cart came for Milton, and he was soon rushed to a hospital, where it was found that he’d dislocated his knee, with substantial nerve and artery damage occurring in tandem with the dislocation. The artery was blocked by the dislocation, preventing blood from flowing to his lower leg. If the doctors weren’t timely, Milton could’ve lost his leg.

Milton had emergency surgery, and blood flow was restored to his lower leg. He’d have several follow-up operations in the days that followed, to ensure that progress was being made. But he’d soon learn that this injury would require long-term recovery.

Two months after his injury, Milton had reconstructive knee surgery. At that point, he still required the use of either a wheelchair or crutches to move around, and he expectedly sat out the 2019 season, allowing true freshman quarterback Dillon Gabriel to take the starting role.

Milton remained on the team in a mentor-like capacity, having served as the starter for two of the team’s most successful seasons in history. But behind the scenes, rehabilitation was his primary focus.

Doctors had told Milton that statistically, half of those with his injury were forced to amputate. In a way, Milton was lucky that, as serious as it was, it hadn’t reached that point. But even so, returning to football was almost an impossibility. Still, Milton pressed on and remained devoted to re-training the knee.

In August, Milton received clearance to start wearing a brace and workout with his knee. He stated that there was a fifty-fifty chance he’d play in the 2020 season. After suffering the injury he did, a coin flip seemed like good odds.

Now, just last week, Gabriel, when asked about Milton, said it’s a matter of “if,” not “when.”

The leg is a dangerous thing, vitally important at all positions, and yet especially vulnerable. Milton isn’t the only quarterback in recent years to suffer a life-changing leg injury. Just two months before Milton, Alex Smith, quarterback of the NFL’s Washington franchise, broke his tibia and fibula. He needed massive amounts of reconstructive surgery, and at one point, a raging infection threatened to take his life.

There was a time when amputation looked like the most practical option for Smith. It was said that his injury more closely resembled a blast wound than a result of contact. But Smith persevered through it, continued to rehabilitate, and wound up making Washington’s 53-man roster for the 2020 season.

In Smith, Milton does not have a direct example to follow, but like Milton, Smith suffered a significant injury to his right leg and returned to the field. Of course, while there’s budding excitement surrounding Milton’s eventual return, one has to wonder how different he’ll be.

For Milton, a right-handed quarterback, this injury may affect his mechanics, which were incredibly smooth before his injury. Pushing off of the back foot — the right foot, for right-handed quarterbacks — is an essential piece of generating momentum for a throw. If Milton’s knee is not one-hundred percent, he may not have as much comfort doing this, and it may prevent him from attaining consistency.

With that being said, Milton will have more time to recover and get where he needs to be before he hits the field. By this point, Gabriel has entrenched himself as UCF’s starter, and if Milton, soon to be 23 years old, wants to return to college football prominence, he may have to go elsewhere.

Before his injury, Milton completed 630 of 1,020 attempts over a three-year span, amassing 8,683 yards, 72 touchdowns, and 22 interceptions. He led UCF to its only undefeated season in history, going 13-0 in 2017, and helped the program achieve newfound respect.

But Milton wasn’t merely a statistical success, either. On the field, he showed true promise. An undersized, yet athletic signal-caller, Milton brought an exciting mix of mobility, arm elasticity, and mechanical fluidity to the field. He was a legitimate NFL Draft prospect before his injury. He may not have been drafted as a starter, but there was a role waiting for him.

Now, the question is whether Milton can find that role again. First, he has to get back on the field, and if his progress to this point is any indication, he will.