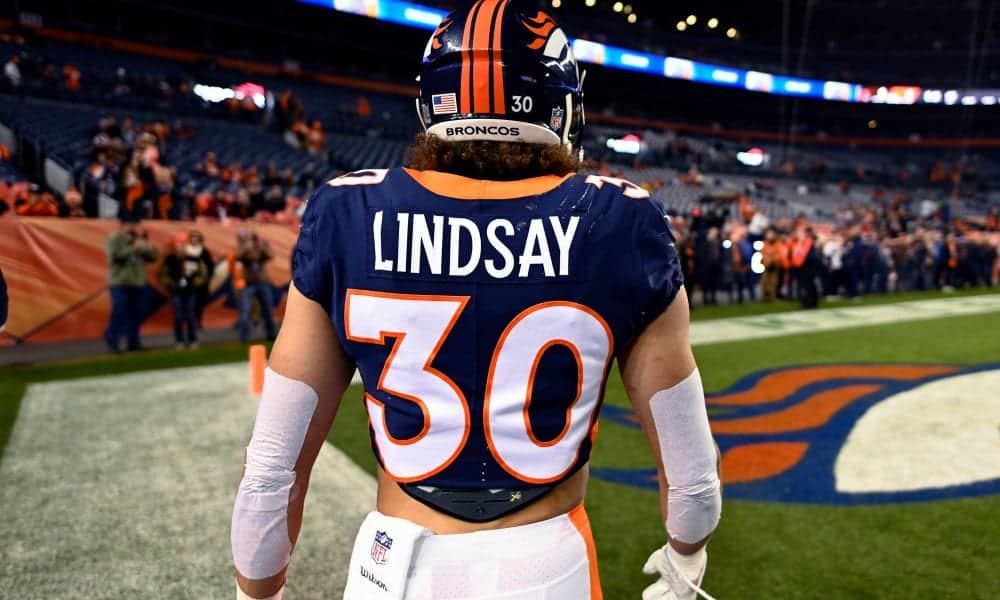 Photo Credit: Ron Chenoy-USA TODAY Sports
What's in this article? Click to show
Is the answer in Phillip Lindsay’s Next Gen Stats?
What happened to Phillip Lindsay in 2019?
Broncos offensive line struggled in 2019
Lindsay did what he could in 2019
Phillip Lindsay: Looking forward to 2020?

In 2018, the Denver Broncos were treated to a surprise from an offseason addition. Undrafted rookie running back Phillip Lindsay’s final stats impressed many as he went from draft afterthought to rookie darling. While he did attain two 1,000-yard rushing seasons in his first two years in the league, Lindsay saw a four-point drop in his Offensive Share Metric score from 2018-2019.

The NFL is in a constant state of fluctuation from week to week, season to season. While Lindsay’s OSM performance saw a small drop was this a result of things within his realm of control, or were there other changes to his surroundings that could better explain the difference. A look into the NFL’s Next Gen Stats should clear this up.

Is the answer in Phillip Lindsay’s Next Gen Stats?

Box score stats can only tell so much when looking into a player’s performance. When taking a look at Lindsay’s overall stats from 2018 to 2019, it might seem apparent that he regressed in the latter season. In 2018, Lindsay ran for 1,037 yards, had an average rush of 5.4 yards, and crossed the goaline nine times on the ground. However, in 2019, he scraped and clawed his way to his second 1,000-yard season, rushing for 1,011 yards on 30 more carries and saw his average plummet almost a full yard to 4.5 yards per carry.

Lindsay earned an overall OSM score of 15.18 during his rookie campaign in 2018, ranking as RB27, but still in the upper half of RBs in the league. The same cannot be said for 2019 when he earned an overall OSM score of 11.83, dropping him to RB33 out of 48 qualifying running backs. What’s caused this decline in both his OSM and production? There was an interesting trend from season to season.

According to Next Gen Stats, in 2018, Lindsay had the sixth-fastest average time to cross the line of scrimmage (TLOS) and 2.64 seconds. One season later, he is the fourth slowest back with a TLOS of 2.99 seconds. That’s not his only rapid change. In 2018, he earned an efficiency rating of 3.39, the third-lowest in the league.

What happened to Phillip Lindsay in 2019?

One season later, he sits at an efficiency rating in 2019 of 4.01, 15th overall out of 48 RBs. A point of clarification, for running backs Next Gen Stats uses efficiency as calculating the total distance a player traveled on rushing plays as a ball carrier per rushing yards gained. A lower efficiency number would signal a back is more of a north/south runner.

Related | OSM Back to the Future: O.J. Howard’s top-ranked performance from 2017

Lindsay’s rise in TLOS makes sense as he was running more east to west in 2019 than he was in 2018, so his regression may not have been entirely his fault. He went from being the third most north/south runner in the league in 2018 to being in the top half of backs who cut it east/west more. When a back isn’t given holes, they have to make space themselves, thus causing them to take longer to cross the line of scrimmage.

The Broncos offensive line struggled in 2019 compared to the season before, particularly at right guard. Denver was only able to pull the left guard effectively to the right side but found little success when pulling the right to the left side on rushing plays. The Broncos RT Ja’Wuan James also suffered an injury and would miss most of the season as a result.

Even with the successful result and some functional blocks in the play below, you can see Lindsay having to wait for blocks and lanes to develop, which was not seen as much in 2018. Lindsay’s average yards before contact dropped from 3.8 per attempt in 2018 to 2.7 per attempt in 2019.

Phillip Lindsay with a huge run for the #Broncos touchdown!!!! pic.twitter.com/c3oWxRo5Lq

Between a struggle in protection and considerable question marks from the quarterback position, Denver’s offense was facing an uphill battle all season. Combine that with fellow RB Royce Freeman also finding little success in 2019, Lindsay was tasked with carrying quite the load as the main component and driving force of the Broncos offense.

Related | OSM Back to the Future: A.J. Brown’s top-ranked performance from 2019

He made the best out of the situation that was given, and that makes sense. His lower OSM seems to be due to a drop in talent/injuries in protection and not so much his production and ability.

However, 2020 may hold a much different season for Lindsay as far as being held back by his surroundings. The QB position looks clearer with second-year QB Drew Lock fully taking over for stop-gap solution Joe Flacco.

Lock is also the beneficiary of two new talented receivers, which were added in the 2020 NFL Draft, Alabama’s Jerry Jeudy, and Penn State’s K.J. Hamler, which will create a dangerous trio with WR Courtland Sutton.

Denver also addressed the offensive line signing Graham Glasgow to fill the void at right guard and drafted former LSU center Lloyd Cushenberry in the third round of the draft after selecting Jeudy and Hamler. Last but certainly not least was the addition of former Los Angeles Chargers RB and 2015 first-round pick Melvin Gordon.

With all of this support being added to create a formidable Broncos offense, it may prove that Lindsay’s stats from 2019 were a fluke. With the load lightened, Lindsay should return to his rookie year form with no problem.