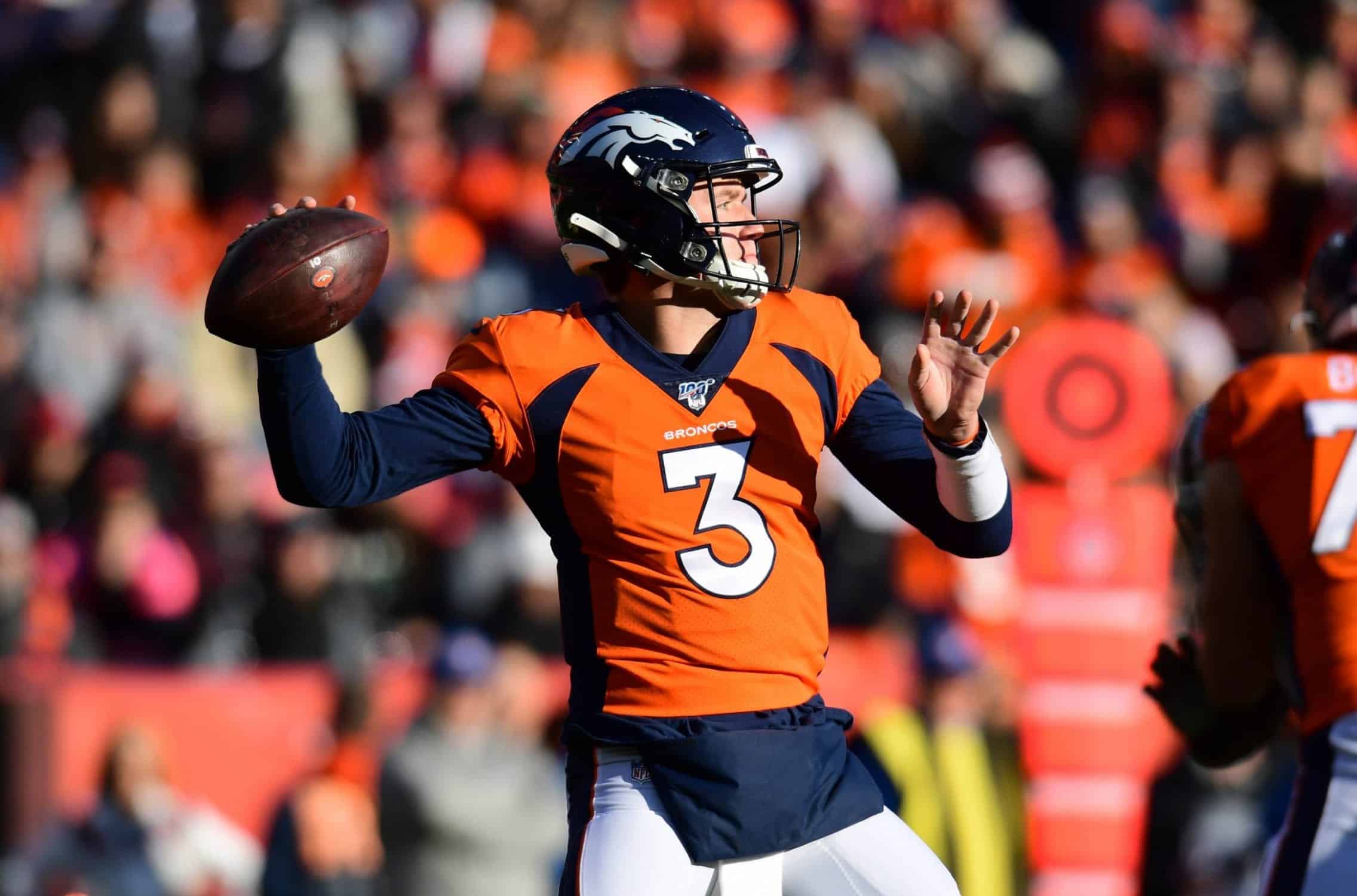 Dec 29, 2019; Denver, Colorado, USA; Denver Broncos quarterback Drew Lock (3) passes the ball in the first quarter against the Oakland Raiders at Empower Field at Mile High. Mandatory Credit: Ron Chenoy-USA TODAY Sports
What's in this article? Click to show
Lock’s OSM grade does not paint him in the best light
Lock’s OSM grade is not as bad as it appears
In order to maximize Lock’s potential, the Broncos need to put better pieces around him
The draft has many opportunities for Denver to improve their receiving core
Can the Broncos maximize Lock’s potential?

Drew Lock was a challenging prospect to evaluate coming out of college. He looked the part of a prototypical quarterback, standing 6’4” with a cannon for an arm, but showed serious flaws in both his accuracy and decision making. Those concerns led to him falling in the 2019 NFL Draft until the Denver Broncos selected him in the second round. Lock appeared to reward Denver for their faith in him, showing a great deal of potential when he was given the starting role late in the season.

In five games as a starter, he threw for 1020 yards, seven touchdowns, and just three interceptions. More importantly, he won four of those five games, pushing the Broncos record to 7-9, accounting for more wins by himself than either of the other players that started at quarterback for Denver. Many fans believe that Lock can finally fill the void left when Peyton Manning retired in 2015, and become their franchise quarterback for the foreseeable future.

Although Lock’s statistics seem solid, they don’t tell the full story. Looking at his PFN Offensive Share Metric (OSM) grade, which measures how responsible a player was for their statistics, we see a very different picture of the young quarterback. His grade of 17.22 ranked 38th in the NFL among qualifying quarterbacks. The only player lower on the list was Jacoby Brissett, who was pressed into a starting role for the Indianapolis Colts after Andrew Luck’s retirement. The fact that his grade was so low implies that he had minimal impact on the statistics he produced, however impressive they were.

It is easier to see why Lock earned such a poor grade when you look at the advanced statistics that go into calculating the OSM. His completion percentage was relatively low compared to other quarterbacks, at 64.1%. Even worse, according to the NFL’s advanced metrics, which calculate what percentage of their passes that a quarterback should have completed, his completion percentage was 1.7% lower than it should have been. Once again, that compares unfavorably to other qualifying quarterbacks.

What really brought Lock’s grade down, though, was how rarely he threw the ball downfield. On average, his passes traveled 6.9 yards past the line of scrimmage across all of his attempts, tied for the sixth-lowest amount in the NFL. His average on completions was even lower, at 4.6 yards, tied for third-lowest.

Lock’s OSM grade is not as bad as it appears

Despite how terrible Lock’s grade looks, it is skewed somewhat by the small number of games that he played. Take a look at the chart below. The black data points represent the number of OSM points scored per minute of play during a given week, and the yellow line represents the league average for quarterbacks. Most of Lock’s data points sit close to the league average, with Week 15 being the extreme exception. 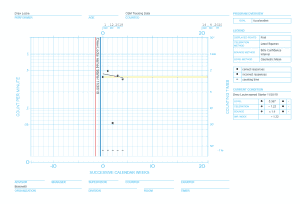 That week, his OSM grade was an abysmal -3.17, which severely brought down his overall grade. It was his worst grade of the season by a mile, and it implies that his play in that game was actively detrimental to Denver’s offensive production. He only completed 45% of his passes, the only time last season his completion percentage dropped below 50%. Additionally, that percentage was also 20.9% lower than expected, according to the NFL’s advanced metrics. It was also the only game in which he had more touchdowns than interceptions. On the whole, it was a disastrous performance for Lock, who otherwise showed a great deal of potential and played reasonably well.

Some factors that impacted his OSM score

Under normal circumstances, Lock having a bad game wouldn’t be anything out of the ordinary. After all, it’s common for rookies to struggle with consistency, especially when they had problems in that area in college, so you would expect him to have a bad game now and then. However, this game was a special case for multiple reasons. To start with, Lock’s opponent was the Kansas City Chiefs, who would go on to win Super Bowl LIV. The game was made even more difficult because it was on the road, as Kansas City is a notoriously difficult place to play.

Worst of all, Lock faced dreadful weather conditions, with thick snow falling from the sky and covering the field, which heavily affects how well a quarterback can throw the ball. Even the best quarterbacks in the NFL could struggle under those circumstances, so it’s no surprise that Lock had difficulty completing his passes. Because of those factors, I don’t think it’s unreasonable to set that game aside as an outlier.

If you do that and calculate Lock’s overall OSM grade based solely on the other four games, it improves to 24.05, a dramatic increase that would have made him the 14th-highest ranked quarterback last season. That still wouldn’t put him in elite company, but it would undoubtedly be far more promising, especially because Lock was not a player you would expect to perform very well on the OSM given his inconsistencies in college.

In order to maximize Lock’s potential, the Broncos need to put better pieces around him

Lock certainly showed potential last season, more than many thought he would. Combine that promise with his undeniable talent, and Denver might have finally succeeded in drafting a quarterback that isn’t terrible. There is a problem though: the skill-position players that will be surrounding Lock next season do not put him in the best position to succeed. The chart below shows primary skill-position players currently on the Broncos roster, along with their OSM grades and where those grades ranked compared to other players at their positions.

As you can see, none of them ranked inside the top twenty at their respective positions. You might wonder why their grades were so low – after all, Sutton made the Pro Bowl last season, and Lindsay and Gordon have both been Pro Bowlers in the past as well. However, when you look into their advanced statistics, the answer becomes very clear. In the case of the wide receivers, their inability to catch passes tanked their grades. Sutton only caught 58.06% of his targets, and Hamilton was even worse at 53.86%. Technically speaking, this represents an improvement in Sutton’s case, as he only caught 50% of his targets the season prior. If he were to improve that number by another eight percent in his third season, that would start to look more reasonable, although it would still be far from elite.

Did Lock suffer from a lack of weapons?

Fant suffered from a similar problem, catching only 60.61% of his targets. Compared to Sutton and Hamilton, that doesn’t seem so bad, but relative to other tight ends, it was arguably even worse. Among tight ends that qualified, Fant’s completion percentage was the sixth-lowest. Fant was a rookie, so he perhaps deserves some leeway on this front. After all, fellow rookies Dawson Knox and T.J. Hockenson both caught a lower percentage of their passes. Still, it’s just another example of the difficulties that the Broncos faced last season, and what they will need to improve in 2020. Given Lock’s tendency towards inconsistency, he needs pass-catchers that he can rely on to catch his passes even when they aren’t perfectly placed. And, if 2019 was any indication, he won’t have those players going into next season.

Relative to their position, Denver’s running backs outperformed their pass-catching counterparts. However, they still underperformed overall. The OSM doesn’t take receiving statistics into account when evaluating running backs, so their catch percentages didn’t cause their low grades. Instead, they struggled on one of the most important factors in calculating a running back’s OSM grade: the efficiency rating. The metric is reasonably straightforward, calculated by taking the number of yards a running back ran in terms of physical distance for each yard they gained statistically.

In the case of the running backs currently on the Broncos roster, none of them had an efficiency rating below 4.0, implying that they were highly inefficient with their movements while carrying the football and lowering their OSM grades by a large margin. The running backs are less involved in the passing game than the receivers or tight ends, so their struggles are less directly relevant to the current discussion. However, better play at the position would take some of the pressure off of Lock’s shoulders, allowing him to maximize his potential.

Based on the above data, two things should be clear: First, that Lock has potential, and second, that, looking forward, the Broncos need to give him better weapons. Fortunately, the 2020 NFL Draft is full of talent at both wide receiver and running back. The signing of Gordon during the offseason almost certainly means that Denver will avoid investing an early pick at his position, but wide receiver is a different story. Even if you like Sutton’s potential, Denver definitely still needs more help in that area.

As such, it should come as no surprise that many mock drafts have them selecting a wide receiver with their first-round pick, and some even have them doubling up and taking another later on. I think that such a decision that I think would be wise assuming the opportunity presents itself. The draft is incredibly deep at the position, with talented players across the board. If the Broncos want to draft a wide receiver with their first pick, there is a decent chance that one of the top prospects will still be available. Even if that isn’t the case, they should nevertheless be able to find solid players later on.

Can the Broncos maximize Lock’s potential?

If the Broncos want Lock to be their quarterback of the future, he’s going to need some help. He’s got talent and showed promise last season, but if Denver doesn’t put better pieces around him, he might be doomed to fail. Hopefully, the addition of some new weapons in the draft, combined with improvements from young players like Sutton and Fant, will give him the tools he needs to be successful. Because if they can, Lock appears to have the potential to be a truly special player. But if they can’t, he might end up being yet another failed attempt by John Elway to find a true franchise quarterback.