OSM Back to the Future: A.J. Brown’s top-ranked performance from 2019

A.J. Brown's top-ranked performance by Offensive Share Metric from 2019 was a highlight for a superb rookie season for the Tennessee Titans wide receiver.

A.J. Brown was in the Rookie of the Year conversation after a spectacular first year in the NFL. His top-ranked performance by Offensive Share Metric (OSM) from 2019 shows he has the skill set to be the focal point of a Tennessee Titans offense that will have to be more reliant on the passing game in 2020.

Selected by the Titans with the 51st overall pick in the second round last year, Brown saw three wide receivers taken ahead of him. However, he emerged from his rookie season as arguably the best of the bunch. Brown finished the regular season with 52 receptions for 1,051 yards and nine touchdowns.

The performance in which he had the most influence over the production of the Tennessee offense came in Week 12 in a blowout win over the Jacksonville Jaguars, and here we reflect on that display in the last of our OSM Back to the Future pieces to focus on the wide receiver position.

Brown earned an elite OSM grade of 57.44 during the 42-20 victory over the Titans’ AFC South rival Jaguars. OSM uses the NFL’s NextGen Stats and a series of algorithms to assess a player’s impact on his team’s production by looking at the factors only he could control.

Given Brown’s production – four catches on five targets for 135 yards and a touchdown – his OSM score is little surprising. He put up those numbers in a performance in which several of the athletic traits he demonstrated during the pre-draft process were on full display.

In his athletic testing ahead of the draft, Brown proved himself a top-tier athlete with a Relative Athletic Score (RAS) of 8.6.

RAS is a composite metric on a 0 to 10 scale based on the average of all of the percentile for each of the metrics the player completed either at the combine or his pro day. 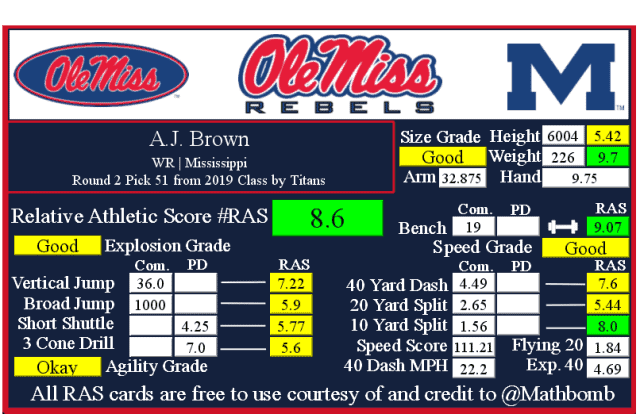 Where Brown excelled was in the metrics that measure strength, speed, and explosiveness. He recorded an elite RAS in the bench press at the Combine and outperformed his expected 40-yard dash time of 4.69 seconds comfortably, clocking a 4.49.

An outstanding 10-yard split built the foundation for his 40, and the lower-body explosiveness that allowed him to burst off the line so quickly was also on show in the vertical jump.

All those attributes came to the fore as he shredded the Jaguars.

Brown had to wait until late in the first quarter for his opening reception of the game, a 19-yard gain on which he utilized the strength that was obvious during his bench press to work off physical coverage from A.J. Bouye and gain separation over the middle. He then showed off agility that did not shine through during the athletic testing to make Bouye miss and gain extra yardage.

It was in the second half, however, where Brown’s impact was most devastating. Early in the third quarter, the Jaguars made the mistake of giving Brown a free release off the line as he was passed off to deep safety Andrew Wingard.

Wingard’s decision to bite on the vertical route, likely influenced by the speed Brown had built up, enabled him to break towards the right sideline and work back towards the ball before making use of his bulk and strength to shake off a tackle of a play that went for 36 yards. Ryan Tannehill finished off the drive two plays later with a one-yard throw to Dennis Kelly.

Still, Wingard could be forgiven for being wary of Brown’s speed, as he was soon celebrating a touchdown after using his acceleration to scorch through the Jacksonville secondary for a 66-yard touchdown.

The same burst that was apparent in his 10-yard split saw Brown surge away from Bouye after catching the ball on an in-breaking route. With blockers out in front and a clear running lane, from there, Brown cruised into the endzone to make it 35-3.

Brown does not have to rely purely on his physical gifts to make significant plays and proved as such on his final catch of the day, a 15-yard reception that became a 28-yard gain when Calais Campbell was assessed a personal foul penalty. Three plays later, the Titans scored their sixth touchdown on a Ryan Tannehill three-yard rush.

He gained instant separation as the short hitch route proved the perfect call against Bouye, who was playing bail technique. Left tackle Taylor Lewan got out to block, and Brown demonstrated excellent vision to find the cutback lane, fittingly capping his day with yet more yardage after the catch.

Brown’s influence on the Titans’ production could hardly have been more substantial. All his catches went for double-digit yardage, and three were critical plays on touchdown drives. His contribution was pivotal in a game eventually decided by three scores and was a result of his ability to create extra yardage for himself.

Per NextGen Stats, Brown’s expected yards after the catch per reception was 4.5. He finished the game with a mammoth 23.5 YAC per reception, the highest average of any player in the NFL in Week 12.

His display was not an anomaly in his rookie season. Brown ended the regular season with 8.8 YAC per reception, outperforming his expected YAC per reception (3.9) by 4.9 yards. Both of those totals saw him lead the NFL.

As was outlined in the previous Back to the Future piece looking at Brown’s teammate Adam Humphries, the Titans are unlikely to be able to lean on Derrick Henry and the ground game to the extent they did during their run to the AFC Championship game last season.

Secondary receivers like Humphries and tight end Jonnu Smith may expect more targets in a 2020 season that will see an increased onus on Tannehill. However, after such an impressive rookie season, Brown’s role as the feature receiver in the passing attack is set to expand.

As his top-ranked performance by OSM against the Jaguars and his consistency throughout his first year illustrate, Brown should continue to thrive as the undisputed top target for the Titans. He may not have won Rookie of the Year in 2019 but, if Brown displays the same proclivity for creating YAC in 2020, widespread applause are sure to come his way.