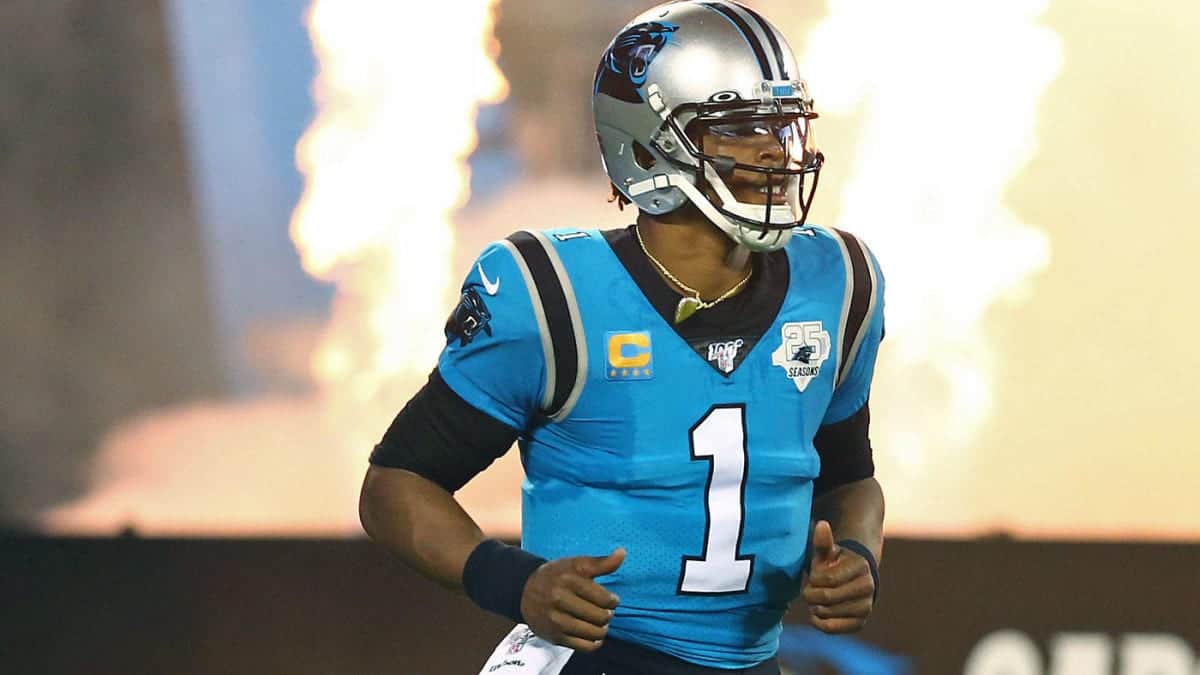 Photo Credit: Jeremy Brevard
What's in this article? Click to show
Newton’s signature has reinvigorated belief in the Patriots as a force in the AFC East
Newton’s OSM regression
As a result, Newton’s completion percentage was one of the worst in the league
McCaffrey was Newton’s favorite target between 2017 and 2018
Newton’s performance fits perfectly with what the Patriots want to do on offense

The New England Patriots have their replacement for Tom Brady. After months of predicted downfall for the dynasty, the Patriots are once again being tipped for the top of the AFC East. What does Cam Newton’s Pro Football Network’s Offensive Share Metric (OSM) indicate for his potential to lead the Patriots to glory in the 2020 season?

After failing to find a trade partner for Newton, the Carolina Panthers released the former Rookie of the Year and NFL Most Valuable Player in March. Despite his stellar resume in the league, including leading the Panthers to an appearance in Super Bowl 50, Newton remained an NFL free agent.

After allowing Brady to hit free agency, and eventually sign with the Tampa Bay Buccaneers, the Patriots quarterback situation has been one of the talking points of the off-season. Free agency and the NFL Draft passed by without a meaningful move at the position and it appeared that Jarrett Stidham was truly the heir apparent.

The rumors linking Newton and the Patriots wouldn’t go away with PFN’s Crissy Froyd indicating that the Patriots were one of his most likely landing spots just two weeks before he signed a one year deal.

Reports of the Patriots’ demise have been greatly exaggerated, apparently.

There can be no doubt that Newton was once a dominant, dynamic, and explosive figure in the league.

During his early years in the league, Newton’s arm strength and ability to make plays with his legs were the hallmark of his game. Nearly ten years after his rookie campaign, what are the Patriots getting with Newton and how will that define his role for the team?

Using a combination of OSM and NFL Next Gen Stats, we can see how Newton’s game has changed in recent years, from 2016 up to his final two games with the Panthers in 2019. OSM only takes the primary function of a quarterback, throwing the football, into account, meaning it doesn’t factor how Newton performs as a runner.

Newton received his highest grade when utilizing his arm strength to drive the ball down the field.

His 64-yard season-long throw was the second-longest throw in the NFL during the 2016 season. He led the league in the NGS metric Air Yards to the Stick (AYTS). The metric indicates how responsible the quarterback is in moving the chains, with Newton throwing on average 1.7 yards past the sticks.

Newton also was one of the most aggressive quarterbacks in the league in 2016, with 24.5% of his throws put into a tight window.

As a result, Newton’s completion percentage was one of the worst in the league

In the 2017 NFL Draft the Panthers selected Christian McCaffrey and the pass-catching running back has had a profound impact on Newton, and his role in the Panthers offense.

Rather than trying to force the ball down the field, Newton used McCaffrey to make the plays.

McCaffrey was Newton’s favorite target between 2017 and 2018

The running back saw 113 targets in his rookie year, two more than Devin Funchess. In 2018, he saw 124 targets, far outstripping wide receiver D.J. Moore who had the second-most targets on the team with 82.

McCaffrey was comfortably the most reliable receiver on the Panthers over the two years. He hauled in 70.8% of his targets in ’17 and secured a remarkable 86.3% of them in 2018. As a result, Newton saw a dramatic improvement in his completion percentage against expectation. In 2018 he ranked 9th out of 39 with a +2.5 differential between actual and expected completion percentage.

The 2018 season saw a career-high completion percentage for Newton and a touchdown to interception ratio that was his best since his MVP season in 2015.

The days of Newton slinging a ball 60 yards down the field may be gone, but his ability to efficiently command an offense has given a new sense of expectation in New England and dampened the spirits of the rest of the AFC East. 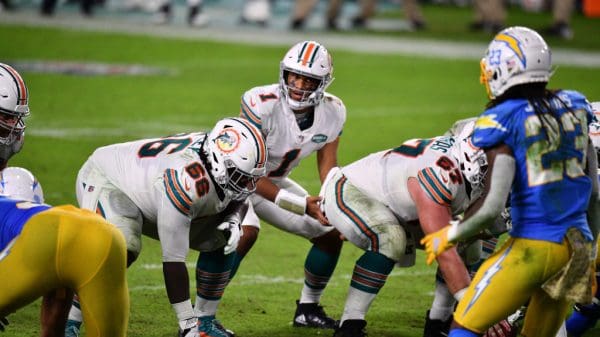 Ryan Fitzpatrick made a brief return to the starting role on Sunday, but Tua Tagovailoa should be the Dolphins' QB if he is healthy.