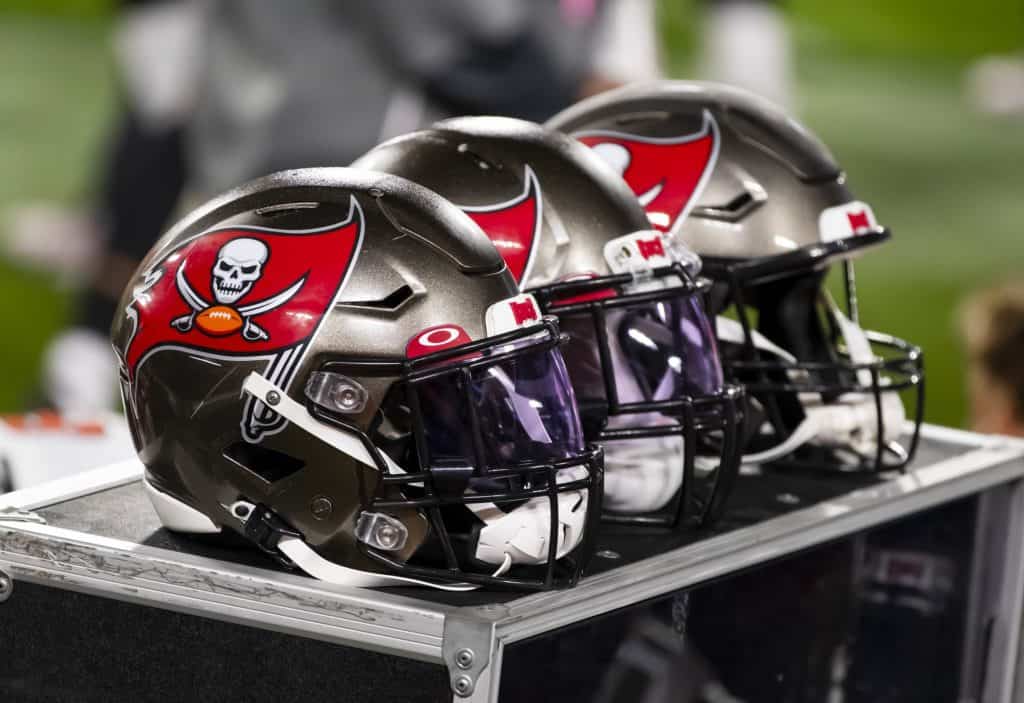 The Tampa Bay Buccaneers were Super Bowl Champions in 2021, and now, they get to become champions in the mock draft world, too. This 2021 Buccaneers 7-Round NFL Mock Draft hits on all the team’s needs. Which, really, aren’t but maybe a running back? It must be nice to build a roster without a glaring need outside the most replaceable position in the sport. Cheers, Bucs fans. You get to compete for the repeat in 2022, and these eight NFL Draft selections should help.

There are not many more exciting prospects in the entire draft than North Carolina running back Javonte Williams. There is nothing I enjoy more than a squatty runner with good short-area explosion and a mass of violence at the point of contact. That is Williams. The 5-foot-9 runner is a mix between old and new school in his style.

The compact back displays his physicality not only as a runner but as a blocker as well. He must improve his technique in pass protection, but the desire is there. There are multiple reps where Williams literally wraps up and tackles blitzing linebackers. That attitude is necessary to become a three-down back at the NFL level. Yet, the Buccaneers are not drafting Williams to be a blocker in this 2021 mock draft.

This young man has a bit of everything as a runner. His vision on interior concepts is a plus. He has great short-area agility and vision at the second level to make defenders miss, and his mass and acceleration make him a freight train to tackle when he hits fourth gear.

Williams must improve his vision on outside zone concepts to become a more complete back, but the Buccaneers are almost exclusively a between-the-tackles rushing attack. They run a lot of duo with a bit of inside and split zone action mixed in. Duo will be a new look for Williams, but with his agility and burst at the first level, we could see success reminiscent of Clyde Edwards-Helaire at LSU.

The Tampa Bay Buccaneers could not leave this draft without trying to find an improvement over their current runners. Luckily, their roster is so talented that they possessed the luxury of taking one at the very end of Round 1.

The Buccaneers seem to like their young group of cornerbacks, but they aren’t necessarily the type to necessarily pay at the end of their contract windows. Carlton Davis enters his final year under contract, so Tampa is eyeing his potential replacement. The Buccaneers do not need much in this 7-Round 2021 NFL Mock Draft, so taking an upside pick in Tyson Campbell seems warranted.

Campbell is a long cornerback with long arms and sprinter speed. He is physical at the line of scrimmage and really works to remain in phase in man coverage. However, late in reps, particularly in the vertical plane, he can overcommit to the vertical route and be snapped off by good route runners breaking back to the football.

In zone coverage, he shows a good understanding of spacing in traditional spot drop zone concepts. His ability to click and close to break on underneath throws is surprisingly springy for a player with his leggy build. He possesses immediate acceleration, which allows him to really close throwing windows.

Campbell has displayed good development over the past two seasons. He does need to become a better processor and continue to work on his overall flexibility.

Like most track-style wide receivers and cornerbacks, Campbell is not the most fluid mover. This makes reactively changing direction a bit of a struggle overall. Still, if he becomes more cognizant as a coverage defender (limited reps in college) and cleans up his footwork in transition, his lateral mobility will improve dramatically.

Marlon Tuipulotu is one of the better-kept secrets of the 2021 NFL Draft class. In a year that lacks top-end talent at the defensive tackle spot, Tuipulotu brings a complete skill set to the next level. Although his teammate Jay Tufele grabs the attention between the two, my preference lies with Tuipulotu.

We must end the stigma that height is somehow inherently a good thing for defensive tackles. It’s simply not important. Poona Ford was “short” for a defensive tackle and ended up undrafted. He’s now one of the better interior defenders in the league and just got a second contract.

LENGTH is what matters far more than height, and Tuipulotu possesses that length. Arm length is a tricky measurement, but the USC defensive tackle measured in at 33 inches on his arms and a very good 80 5/8 inches on his wingspan.

“Three-year starter who missed most of his freshman season with a back injury. Possesses great first-step quickness, consistently gets leverage on opponents, and works his hands throughout the action. Athletic, rarely off his feet and fluid moving in any direction. Possesses a closing burst and shows the ability to make plays in space, even when dropped off the line. Plays with balance as well as body control.”

The one need the Buccaneers must address in the 2021 NFL Draft is the defensive tackle position. Ndamukong Suh is 34 years old, and a compliment to Vita Vea is an absolute must moving forward. This DT class has a ton of talent that can be had on Day 2. In this 7-round mock draft, the Buccaneers get one that can play both the 3-technique and the nose in a pinch.

Cameron Sample is one of the most unique evaluations in the 2021 draft process. He played up and down the Tulane defensive line, but he shined at defensive end during the Reese’s Senior Bowl. Teams must have relayed to him that they prefer him as an outside rusher because he weighed in at just 267 pounds at his pro day.

The Pewter Report’s Jon Ledyard is a fan of his. That bodes well for my selection of the Tulane pass rusher in this 2021 Buccaneers 7-Round NFL Mock Draft. Ledyard believes Sample was largely misused at Tulane, playing many snaps as a 4-technique head up over the offensive tackle. His performance in Mobile, Alabama, for the Senior Bowl, had everybody turning their heads as he pinned his ears back from a more traditional alignment.

Sample has received a lot of comparisons to Carl Lawson. Although Sample does not have quite the fanfare from the Twitter draft community as Lawson, the way the NFL views both from a value perspective could be similar, as it was in this mock draft. If all Sample becomes at the NFL level is a strong run defender who occasionally gets to the quarterback, that is an absolute win with a fourth-round pick.

One thing that might find Sample drafted ahead of Lawson’s No. 116 overall selection is his length. Although his height is just above the 30th percentile, his length is more than adequate. This allows him to lock out defenders and be a force against the run.

The Buccaneers have no need for a starter on the interior in this 2021 7-round mock draft. However, a team can never have enough depth. That is particularly true when the team’s QB is a card-carrying member of the AARP, and furthermore, has never been one for athleticism even in his prime.

Trey Hill is a large interior blocker, but his game is a bit contradictory. What I mean is for as large as he is, he showed well playing as a technical positional blocker at the first level and someone who did well to locate and finish second-level targets in the run game. His struggles tend to come against power, which for a 320-pound center is puzzling. What is more puzzling is that the strengths in movement for his size he showed on tape did not transfer to his testing, which was very poor.

Hill must get stronger to survive at the next level. Nevertheless, he has the baseline technical ability and body to get there. With a bit of seasoning behind an already tremendous offensive line, maybe he can improve through osmosis as he watches the Tampa Bay interior dominate.

Take athletic EDGE defenders on Day 3. Bet on the athletic upside of the player. Jonathon Cooper never produced at the level of what you’d expect from a top-75 player coming out of high school would. Yet, he spent five years at Ohio State playing with some of the most talented pass rushers around.

Cooper lacks the ideal size of a hand in the dirt defensive end, but he makes up for it with his intelligence and ability to move laterally. He possesses a good get-off with decent bend and a lot of lateral agility. He didn’t test well in the jumps at the Ohio State Pro Day, but his first step doesn’t seem to match that lack of pop.

Cooper will struggle with power on the edge at the next level, but as a rotational piece alongside one of the best run-defending teams in the league, he should fight for a roster spot in 2021.

Draft 1-technique defensive tackles on Day 3. It will take them some time to develop their mental processing at the speed in which the NFL game is played most likely, but they’re some of the best value picks to find as actual contributors.

Khyiris Tonga has a lot of development ahead of him. However, his explosiveness off the snap is outrageous. If Tonga is allowed to shoot a single gap or penetrate as a gap-control player, he will splash at the next level as a rotational defensive tackle behind starter and mobile brick mansion, Vita Vea.

Tonga must learn to play lower and with more control. His hand usage is primitive, and he’s often outclassed when faced with the task of two gaps. However, taking a defensive lineman with his athletic profile as a moldable ball of clay is one of my favorite picks in this 2021 Buccaneers 7-round mock draft.

Rob Gronkowski is older and hasn’t had the best injury history. O.J. Howard will play the 2021 season on his fifth-year option, but his future is largely unknown past that. As of now, Cameron Brate is the only real option heading into the 2022 season.

Matt Bushman is an older prospect, which hurts his overall value. He’s not the most physically imposing player at the point of attack either. Using him as a pure blocker isn’t setting him up for success.

Bushman is strong as a tight end at creating separation. There is nuance to his route running, and he possesses a good catch radius which was often displayed as Zach Wilson threw passes away from defenders leverage into tight windows. Grabbing depth to stash at tight end should not be ruled out for the Buccaneers in the 2021 NFL Draft.