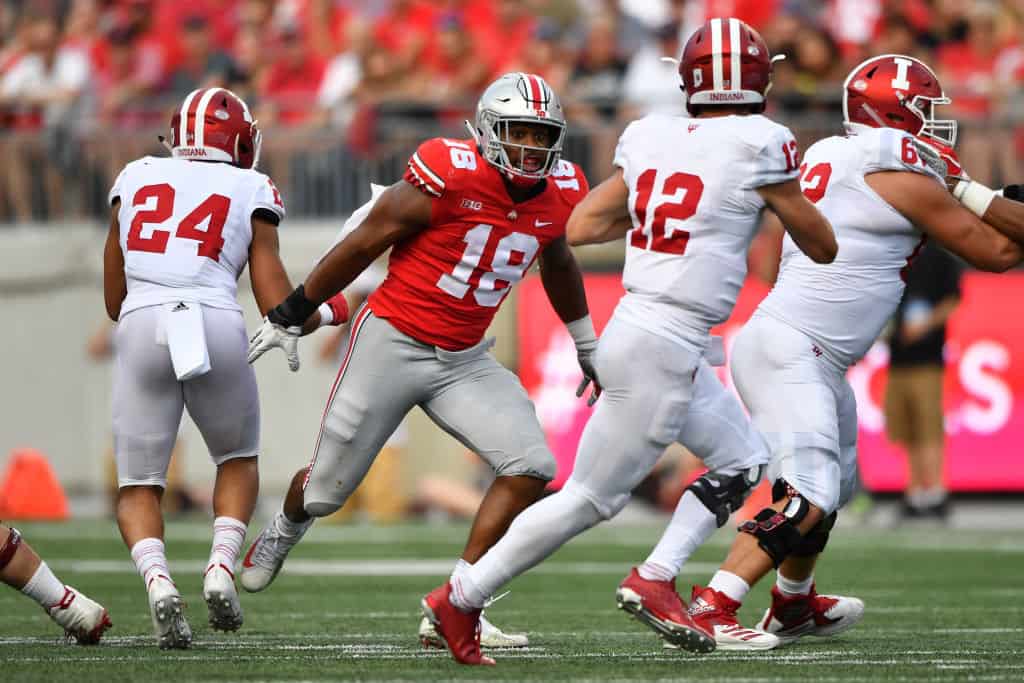 The Ohio State Buckeyes have always been regular suppliers of NFL talent on the defensive line. However, in the past five years, their production rate has increased. Since 2016, Buckeyes edge rushers like Joey Bosa, Tyquan Lewis, Sam Hubbard, Nick Bosa, and Chase Young have all gone on to secure premier roles at the NFL level. Can current Ohio State edge rusher Jonathon Cooper follow their example in the 2021 NFL Draft?

Positives: Tough, intelligent defensive end with marginal size and speed. Fires off the snap with a terrific first step, displays good athleticism, and can bend off the edge. Fast up the field, immediately alters his angle of attack, and flattens to pursue plays from the back side. Plays with terrific pad level and consistently gets leverage on opponents. Quick in all his actions, displays an explosive inside move, and works his hands throughout the action. Plays with balance and is rarely off his feet.

Negatives: Easily tied up at the point by blocks. Out-positioned from the play by lesser opponents. Lacks bulk. Does not possess great pursuit speed.

Analysis: Cooper was a hard-working defensive end for Ohio State but may be physically tapped out. He’ll be a pass-rush specialist at the next level who can line up in a three-point stance and stand over tackle.

Jonathon Cooper had a very solid Senior Bowl week. As I wrote in the practice report linked above, Cooper was fairly disruptive during each practice, and he used his twitch, strong hand usage, and effort as a rusher to exploit his opponents’ weaknesses and gain the advantage in one-on-ones. Cooper still doesn’t have elite athletic traits, but at the Senior Bowl, he raised his projected NFL floor by maintaining steady production as a pass rusher. He should still be a Day 3 pick, but he has the potential to go higher than expected.

The same year Joey Bosa went to the NFL as a universally-lauded prospect, Jonathon Cooper was a four-star high school recruit out of Gahanna, Ohio, just 11 minutes away from Columbus. Rated as ESPN’s 57th-best player in his class, Cooper was the seventh-best player at his position and ranked as the No. 2 player in the entire state of Ohio.

Subsequently, Cooper had interest from a number of Power Five schools, including Michigan, Notre Dame, and Tennessee. However, seeing a school so close to home produce at a high level sold Cooper on Ohio State.

He committed to the Buckeyes early, in the winter of 2014. Other schools offered Cooper after his commitment, but the standout prospect was set on playing for his hometown team.

Jonathon Cooper has often been a complement to other more prestigious edge rushers. Even after five years of playing time with the Buckeyes, he hasn’t quite carved out a reputation for himself on the NFL Draft circuit.

As a true freshman with the Buckeyes, Cooper logged snaps as a rotational player. In four appearances, he managed to accrue six tackles, a tackle for loss, and a sack. In 2017, Cooper’s rotational role increased. He played in all 14 games, amassing 16 total tackles, 3.0 tackles for loss, 2.0 sacks, and a fumble recovery.

In 2018, Cooper became a full-time starter alongside Nick Bosa. He again played in every game and had his most productive season, accumulating 25 total tackles, 6.5 tackles for loss, 2.5 sacks, and another fumble recovery. Hopes were high for Cooper in 2019, as he was named a team captain for his senior season. However, injuries forced him to redshirt, and save his farewell season for 2020, instead.

Although it wasn’t ideal for Cooper to delay his leap to the NFL an extra year, the decision may have been good for him.

Cooper’s 2020 season has been his most efficient yet. Had he played twelve games, it would also likely be his most productive. In just seven games, Cooper has 22 tackles, 3.5 tackles for loss, 3.5 sacks, a pass deflection, and a forced fumble. He also still has one more game left — the title game against the Alabama Crimson Tide.

Cooper put together a respectable career on the field for the Buckeyes, but his work off the field is almost more impressive. Cooper was a team captain, and he was also a two-time Academic All-Big Ten selection. Additionally, he engaged off-campus in various community-building activities.

Cooper has a career beyond football, but for now, he’s giving his shot to an NFL future. He completed a stint at the Reese’s Senior Bowl in late January. Now, it’s on to draft season.

Cooper’s performance in the 2020 National Championship

As evidenced by the 52-24 final score, the Ohio State defense had a lot of trouble containing Alabama’s scoring attack. Jonathon Cooper was one of many who failed to provide consistent help.

Cooper did have a few instances of solid hand usage. He also brought good energy, as is expected from the team captain. But Cooper’s relative lack of length, power, and athleticism prevented him from generating much pressure, and he was often flushed out in run defense.

Given the success that Ohio State edge rushers have had recently in the NFL, Jonathon Cooper immediately draws attention. On paper, he has decent size at 6-foot-4, 257 pounds. He also has the pedigree that often comes with NFL edge rushers. Furthermore, there are a decent amount of flashes on tape that indicate where his upside lies.

Cooper is a dense, energetic rusher who brings a good amount of juice off the line. His straight-line explosiveness is fairly solid, and Cooper also brings decent lateral twitch. Cooper also couples this twitch with a variety of pass rush moves, and he’s boasted the ability to package moves together on more than one occasion.

The Ohio State edge rusher has moments where he times his hand swipes extremely well, blocking down punches as they come his way. He also has modest upper-body flexibility. Although he isn’t particularly strong there, he has, on occasion, displayed the propensity to lean as he turns the corner.

Where does Jonathon Cooper fall short?

As odd as it may sound, some of Cooper’s strengths are also weaknesses. He’s compact and dense, but he can add more power to his game. He has decent initial explosiveness, but he often fails to carry that speed through the rep. He can lean, but he doesn’t have consistent bend or torso flexibility, and he doesn’t have much ankle flexion available, either.

Cooper comes off as a prospect who’s average to above-average in several areas. However, he doesn’t have any dominant traits. His length isn’t all-encompassing, and he doesn’t have enough speed to consistently convert into artificial power. Cooper does bring energy and hustle, and his motor is inspiring. But there are physical limitations that may limit his NFL ceiling and confine him to a role as a rotational backup.

The 2021 NFL Draft edge rusher class has gotten stronger over the past year. As solid as Jonathon Cooper’s final season has been, he hasn’t been a part of that rise.

If Cooper can add more strength to his frame without sapping any athleticism, he could potentially have a future as a power rusher with some limited inside-outside versatility. But for now, he’s a workmanlike edge defender whose physical limitations pits him as a solid backup or depth player.

Could Cooper be a starter? Maybe. But to be a starter, Cooper will have to refine his technical skills and hand usage to the maximum. He has his moments with precision and timing, and his hands are fast and forceful by nature. If he can maximize that, then Jonathon Cooper can potentially outperform his draft billing.

However, his lack of elite physical traits below that relegates him to the mid-to-late Day 3 conversation.

Where does Cooper mesh best at the NFL level?

There is a silver lining for Cooper here. He has experience working out of a three-point stance in his time with Ohio State’s 4-3 scheme, but his size and initial burst give him some potential as an outside linebacker in a 3-4 scheme, where he’ll be able to mitigate his length concerns with more space.

Because the Ohio State EDGE doesn’t have great pursuit speed or much coverage experience, that’s not an ideal role for him. However, as simple rotational depth, Cooper has utility in both alignments. Teams like the Falcons, Titans, and Browns could stack Cooper with an earlier EDGE pick. But in truth, most teams have cause to consider adding EDGE depth in the later rounds.

Jonathon Cooper likely won’t be coveted as a starter in the 2021 NFL Draft. However, players of his mold — high-motor, high-character edge rushers with middling traits — often stick around as depth in the NFL. And from there, Cooper’s energy, twitch, and hand usage could help him make the most of his opportunities, whenever they may come.