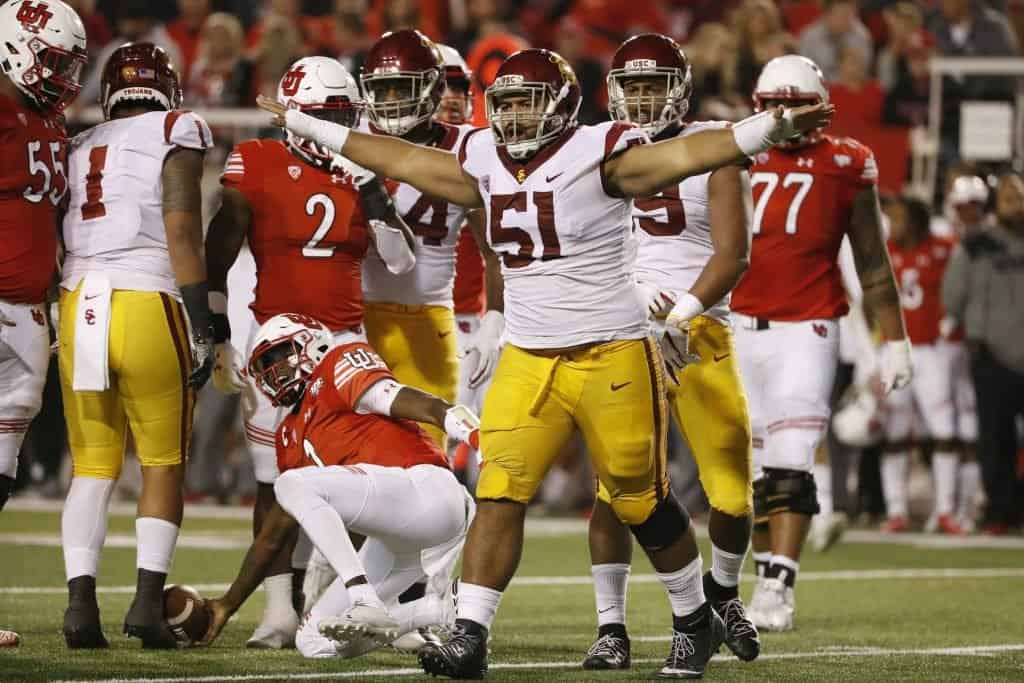 The Senior Bowl gave scouts an up-close look at several under-the-radar interior defensive linemen. Joining that group was USC defensive tackle Marlon Tuipulotu, an intriguing NFL Draft prospect and a long-time standout on the Trojans’ defensive front. The Senior Bowl was a big checkpoint for Tuipulotu, but his evaluation remains one of the more intriguing ones on the draft circuit. What does he bring to the table, and furthermore, what will be his role at the next level?

Positives: Three-year starter who missed most of his freshman season with a back injury. Possesses great first-step quickness, consistently gets leverage on opponents, and works his hands throughout the action. Athletic, rarely off his feet and fluid moving in any direction. Possesses a closing burst and shows the ability to make plays in space, even when dropped off the line. Plays with balance as well as body control.

Negatives: Easily out-positioned from the action by a single blocker or knocked off the line by bigger opponents.

Analysis: Tuipulotu has shown a steady line of progress in his game the past three seasons. He’s a three-technique tackle who must improve his playing strength and complete his game.

Tuipulotu had the strength of the defensive linemen group working against him in Mobile. Standout performances from players like Cameron Sample, Levi Onwuzurike, Ta’Quon Graham, and Osa Odighizuwa, rendered Tuipulotu a lesser-heralded player.

Nevertheless, Tuipulotu managed to stand out on certain reps and caught the eyes of onlookers on several occasions. Here’s more on his Senior Bowl performance, from the 2021 Senior Bowl American Team Practice Report.

“I wanted to see Marlon Tuipulotu finish the week on a stronger note. He was less consistent on Thursday, and his power wasn’t as effective in helping him gain separation. Having said that, he stood out early on and did enough to make an impression as a dense, well-leveraged lineman, with a lot of the physical tools necessary to produce. With his proportional length and power, he has some versatility from the one to the three-technique, and if he can tap into more of his upside, he can be a multifaceted NFL lineman.”

Size has always been an easily marketable trait on the defensive line. However, over the years, teams have become tuned in on what specific elements of size matters. In recent years, the idea of the shorter, better-leveraged lineman has started to gain steam.

That was the archetype that Marlon Tuipulotu matched early on in his football career. He was a defensive star in high school, as well as a state champion wrestler in his weight group.

In the 2017 recruiting class, Tuipulotu was a four-star prospect on the defensive line and a near Top 100 recruit. Ranked as the 109th best recruit in the nation and the eighth-best recruit at his position, he received offers from Oregon, Notre Dame, and Michigan, among other schools. As an Oregon native, the Ducks were compelling, but Tuipulotu chose to follow the route of his cousin Fili Moala, and join the USC Trojans football program instead.

Taking his talents to the college football level, Marlon Tuipulotu quickly caught the eye of USC coaches. He was primed to produce early as a freshman. However, injuries derailed his true freshman campaign. The USC defensive tackle ended up playing only one game, logging 2 total tackles. As a result, he redshirted in his freshman season.

In 2018, Tuipulotu made the leap that was anticipated a year prior. He started ten of 12 possible games, amassing 33 total tackles, 4.5 sacks, and 5.5 tackles for loss. Alongside fellow redshirt freshman Jay Tufele, he helped form one of the better defensive fronts in the Pac-12.

When Jay Tufele chose to opt-out of the Pac-12’s 2020 fall season, the spotlight fell on Tuipulotu, and he flourished. Although he played in just five games, Tuipulotu logged 23 tackles, 3.5 tackles for loss, 2.0 sacks, and a forced fumble.

He was named a first-team All-Pac-12 selection for the first time in his career. Having ended his college career on a high note, Tuipulotu accepted an invite to the Reese’s Senior Bowl. In addition, he declared for the 2021 NFL Draft.

Marlon Tuipulotu measured in a little bit shorter and a little bit heavier than expected at the Senior Bowl. Still, nothing changed in regards to his projection. He is still a stout defensive lineman with plus leverage, and at the Senior Bowl, he also showed off some explosive traits. As Tony mentions above, the USC defensive tackle has impressive get-off for his size, and although his length isn’t elite, it’s solid proportional to his height.

Tuipulotu’s serviceable length can help him anchor against interior linemen. If he can add more natural strength, his versatility could help him be a hybrid three-technique who can also shadow into the one and zero-techniques. As of now, he’s a very good fit as a three-technique defensive tackle. He’ll have to get stronger if he wants to be a starter, but he has natural leverage and athleticism, which gives him a steady floor to build upon.

Which teams could best use Tuipulotu’s skill set?

As of now, Marlon Tuipulotu looks like an early-to-mid Day 3 pick in the NFL Draft. However, the USC defensive tackle will benefit from his leverage and projected versatility on the inside. Teams that use 4-3 schemes will like his fit as a well-rounded lineman, as will teams that run hybrid schemes.

On Day 3, he’s a depth candidate for well over a dozen teams. Yet, teams like the New York Giants, Dallas Cowboys, Los Angeles Chargers, and Buffalo Bills, feel like really solid fits in that range.

Tuipulotu doesn’t get as much buzz as his teammate Tufele. However, he has a skill set that translates well to the NFL. At his maximum, he could be a productive starter in the right scheme. Nevertheless, as it stands, he profiles as a solid rotational lineman. Moreover, if he can add more natural strength to his game, he could have the versatility to slide up and down the interior, providing value wherever it’s needed.