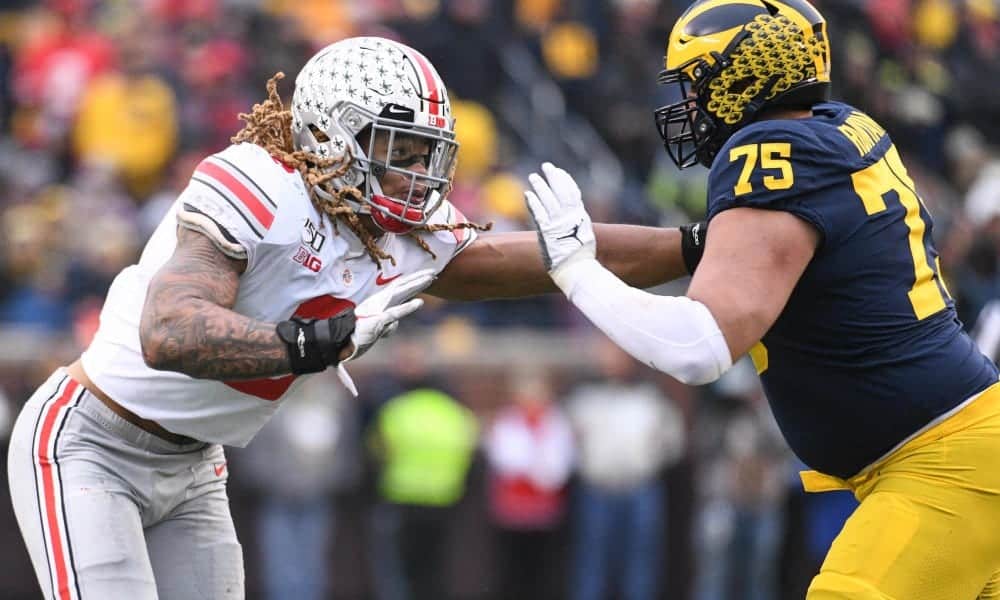 Career Snapshot: Three-year starter who earned Second Team All-Big Ten honors and made 115 tackles (nine for loss) with 5.5 sacks as a junior in 2018. Suffered a season-ending knee injury after he started the first four games of the 2019 season. Combined to make 186 tackles (17 for loss) with seven sacks and four interceptions as a sophomore in 2017 and as a redshirt freshman in 2016.

Positives: One-time highly rated inside linebacker who plays with tenacity, displays a great head for the ball and attacks opponents. Works his hands to protect himself and get off blocks, quickly collapses laterally and shows a closing burst. Patient, effectively reads the action and shows ability in pursuit. Explosive and finishes plays. Effectively makes the calls and quarterbacks the defense.

Negatives: More of a two-down defender who is best in the box or up the field. Struggles with his ball skills. Missed all of 2019 due to injury.

Analysis: Bailey was graded anywhere between a third and fourth-round pick by NFL scouts prior to his injury, but he’s now expected to drop deep into the draft. He has limitations, but if he’s able to return to his prior form, Bailey offers potential as a starting middle linebacker in a 4-3 alignment.

Career Snapshot: First-year starter who earned First Team All-Big Ten honors and made 61 catches for 830 yards and seven touchdowns as a senior in 2019. Named Honorable Mention All-Big Ten, caught 34 passes for 583 yards and two TDs and started four games as a junior.

Positives: Athletic tight end who displays himself as an outstanding pass catcher. Quickly releases off the line and gets into breaks, runs sharp routes, and has the ability to separate from defenders. Fights with his hands, comes back to the ball and extends to make the reception away from his frame. Agile, nicely adjusts to the errant throw, and shows no stiffness. Tough and plays while injured. Gives effort as a blocker.

Negatives: Shows a lot of inconsistency. Drops catchable throws and loses out in battles on occasion. Must work to secure receptions better. Lacks strength at the point, struggles to finish blocks and has a tendency to fall off opponents.

Analysis: Hopkins is developing into a solid tight end and comes with huge upside. He needs a lot of work on his overall game, but he’s a second day or mid-round prospect who could eventually develop into a starter at the next level.

Career Snapshot: Four-year starter at right guard who was named Honorable Mention All-Big Ten in each of his final two seasons at Purdue.

Positives: Big-bodied, small-area blocker who displayed great durability at the college level. Keeps his head on a swivel, works well with teammates, and shows a good feel for blocking. Keeps his feet moving, makes proper use of angles and stays square. Strong at the point, seals defenders from the action and turns them from the line.

Negatives: Must sink his butt better at the line of scrimmage. Occasionally bends at the waist. Lacks footwork off the edge and gets exploited by speed rushers.

Analysis: McCann made the most of his ability at the college level and possesses the size and wherewithal to potentially back up for an NFL team.

Positives: Nice-sized cornerback who jams receivers at the line of scrimmage, quickly flips his hips and plays with solid speed. Shows good awareness when he faces the action, works to help out safeties, and possesses a closing burst. Fires up the field to defend the run and plays aggressive football.

Negatives: Late to react to receivers’ moves. Faceguards when he should get his head back around to locate the pass. Had a disappointing senior campaign.

Analysis: Scouts graded Hayes as a potential late-round choice entering the season, but he disappointed as a senior and will now go undrafted. He possesses the size and physical nature to be a dime back at the next level, although he is better in a zone system with the action in front of him.

Positives: Athletic 3-4 outside linebacker with the ability to rush the passer and make plays in space. Breaks down well, fights with his hands and fluidly moves in every direction. Remains disciplined with assignments and does more than mindlessly rush up the field. Explosive, agile and fluid when asked to twist or stunt. Resilient, stays with the action and shows good change-of-direction skills. Flows well laterally to make plays in pursuit.

Negatives: Easily blocked from the action by a single opponent or outpositioned from plays. Turned in average production at the college level.

Analysis: Though Lumor has flashed ability, his decision to enter the draft was a bit of a surprise. He possesses the underlying skills to line up at outside linebacker, but he will have an uphill battle to make it at the next level.

Career Snapshot: First-year starter who made 35 tackles (7.5 for loss) with one sack as a senior in 2019. Made two starts as a junior and totaled 24 tackles (three for loss) with two sacks.

Positives: Explosive, slightly undersized defensive lineman who shows versatility. Bends his knees, plays with proper pad level, and keeps his feet moving. Quick in all aspects, effective with his hands and easily changes direction and alters his angle of attack.

Negatives: Lacks bulk and strength. Easily controlled at the point of attack. Turned in average production at Rutgers.

Analysis: Previlon has nice length and growth potential and great athleticism. He’s still rough around the edges after he was moved around on the defensive line at Rutgers, but he comes with upside and should receive practice-squad consideration.

Career Snapshot: Three-year starter at right tackle who started 36 consecutive games during those three seasons. Made five starts as a redshirt freshman in 2016.

Positives: Nice-sized tackle who moves around well for a big-bodied blocker. Quickly sets up off the snap, keeps his feet moving and keeps his hands active. Stays square, keeps his head on a swivel, and works his hands throughout the action. Quick out to the second level and makes good use of angles and body position in pass protection.

Negatives: Lacks footwork off the edge and has a tendency to overextend into blocks. Must improve his balance. Seems very unsure of himself.

Analysis: Seymour possesses size and enough athleticism to play at the next level, but he must really elevate his game. In a worst-case scenario, he’s a practice-squad prospect and developmental lineman.